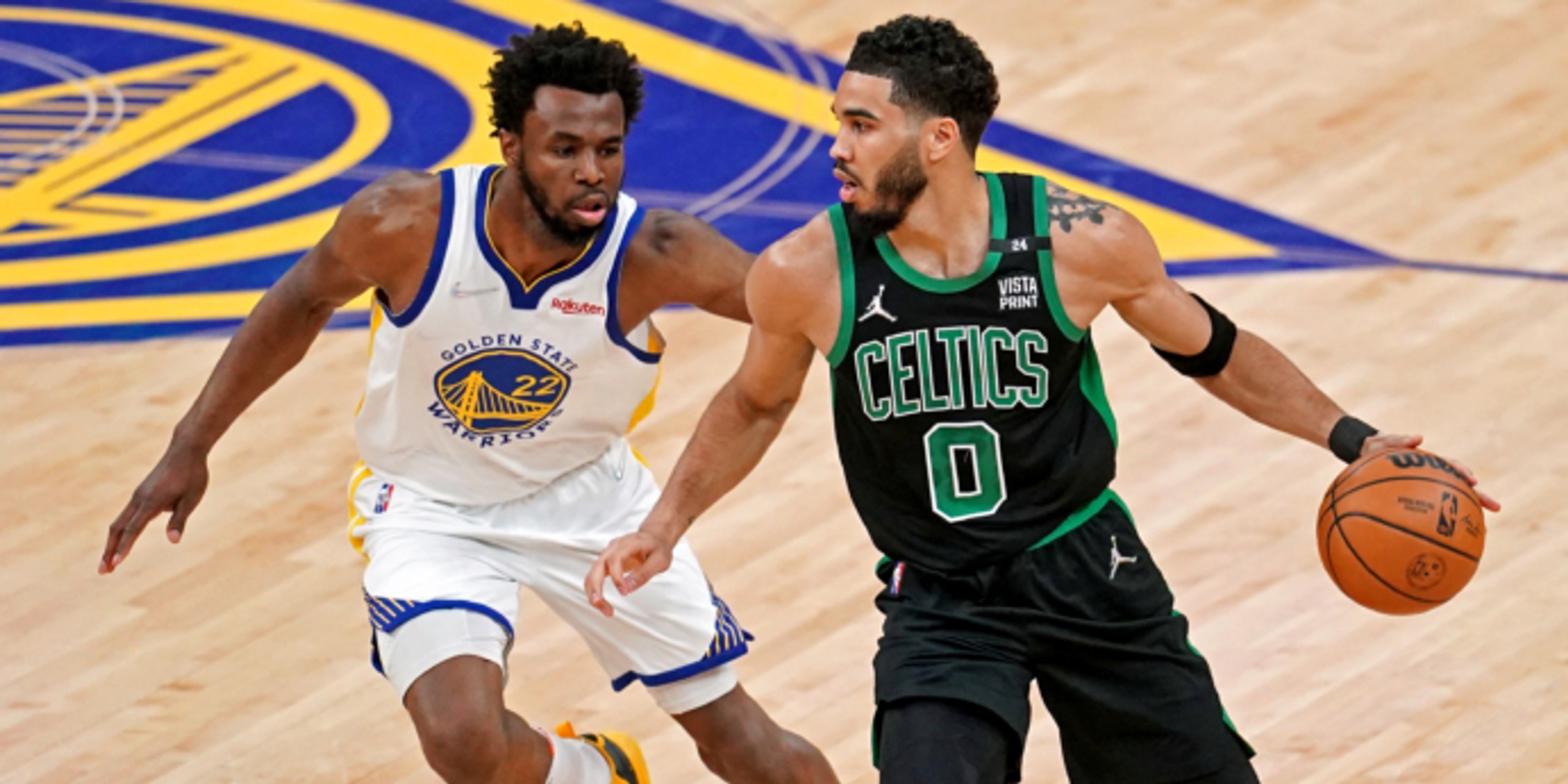 Breaking down 7 plays that define the Warriors' Game 5 victory

In the Golden State Warriors’ 104-94 victory over the Boston Celtics in Game 5 of the 2022 NBA Finals, a few themes prevailed, powering them one win shy of their fourth title in eight seasons. Broadly, the formula was an elite defense once again reminding everyone that Boston is not the lone menacing unit in the Finals, along with timely shot-making and star-powered contributions.

Rather than laser in on a singular storyline and highlight every play connected to it, let’s touch on an assortment of different sequences that help summarize all of these prevailing themes.

Draymond Green’s offense has justifiably drawn prominent ire in this series. Prior to Game 5, he recorded 17 points on 26 shots and his lack of scoring prowess, particularly as a spot-up shooter, constantly bogged down the offense.

Yet on Monday, he scored 8 points on 6 shots, handed out 6 assists and committed only 2 turnovers. He’d turned in some excellent defensive showings to this point, but Game 5 was easily his most well-rounded of the series.

His first assist of the night previewed the next couple hours. Sometimes, Green’s dismal offensive performances are partially defined by erratic, undisciplined passing, but that wasn’t the case in Game 5. To kick off the festivities, he lofted a perfect feed into Otto Porter Jr.’s bread-basket for the bucket.

Porter slipping the screen was emblematic of Golden State deciphering just enough openings in the crannies of Boston’s fortress to complement its own imposing defense. A 107.5 offensive rating is quite poor, but this club’s formula for a title has always been shepherded by the defense.

Al Horford hugging Stephen Curry along the baseline, removing him entirely from any chance of helping on the pass, laid the foundation for a game where the superstar’s gravity regularly opened up chances for others. His own 7-of-22 line was unremarkable scoring-wise, though the manner in which the Celtics tethered themselves to him created space elsewhere instead.

Three days after gobbling up a career-high 16 rebounds, Andrew Wiggins returned to score the second-most points of his playoff career with 26. With Curry marred in an uncharacteristic shooting slump and Boston still successfully limiting Klay Thompson’s scoring volume, somebody had to prop up the Warriors’ attack.

That man was Andrew Wiggins, who repeatedly exposed the single coverage he faced, using his size and physicality to launch off the bounce.

He particularly flourished in the final frame, when he scored 10 of his 26 points on 5-of-6 shooting. Wiggins’ handle can be robotic and leave him susceptible to stunts or digs. As the Celtics often face-guarded Curry and Thompson (look how they’re defended in that clip), the Canadian wing enjoyed added space to operate and wield his self-creation chops. Nearly 70% of his baskets have been assisted during the playoffs, whereas that mark fell to 50% in Game 5.

Overwhelmingly, Jaylen Brown’s 2022 NBA Playoffs have been sensational. He’s endured some hiccups, including Game 2 of the Finals, but they’ve merely been hiccups and haven't become the norm. Monday was another hiccup.

He logged 18 points on 5-of-18 shooting and committed 4 turnovers. Golden State continually forced him left as a driver and pull-up scorer, which is assuredly not his preference. His handle and ball control are precarious as is, let alone when he’s guided away from his dominant hand.

To further eliminate the right side as a driving lane, both for Brown and Jayson Tatum, the Warriors loaded the gaps and invited middling shooters to bomb beyond the arc. Derrick White entered Game 5 drilling 50% of his triples in the Finals, yet Green helped one pass away and prevented Brown from frequenting the paint. The result is a midrange pull-up Golden State will likely accept, which occurred after Green initially walled off the middle for Brown around the screen.

4. Golden State making Boston get comfortable with the uncomfortable

At the point of attack, Golden State’s most lucrative defensive approach in this series has been to apply pressure on the catch, and extend the Celtics’ offense well away from the hoop. Boston’s scheme involves considerable side-to-side movement, with flare screens or other subtle actions designed to create small advantages that morph into sizable ones.

The Warriors refused to let that be commonplace in Game 5, swarming virtually everyone immediately on the catch. Hardly anything Boston achieved felt seamless. Arduous was the defining term of their experiences. On a giveaway midway through the second quarter, Golden State’s pressure arrived at every turn.

Gary Payton II bothered Tatum on the inbounds. White hardly has room to collect himself before Curry is fastened to his hip. Horford caught the ball with Porter draped on him. Tatum generated a bit of space, but even if Horford’s delivery wasn't errant, Green rotated over to complicate matters.

The Celtics committed 18 turnovers in Game 5. Although some were unforced, many unfolded similarly to the one above, with Golden State’s defense making every brief opening feel fleeting and spurring hurried decisions.

5. Succumbing to the orbit of Stephen Curry’s gravity

On the clinching possession of Game 4’s defeat, Boston twice brought two defenders to Curry. The second time, it led to a bucket that pushed the Warriors’ edge to five with roughly a minute remaining. In Game 5, the Celtics didn’t necessarily blitz Curry each play, but their defense afforded him extra attention more often — on and off the ball.

Previously, they’d predominantly stomached dropping and switching against him, but the coverage skewed more extreme Monday. This isn’t to say Boston’s defense was the culprit of its loss — the offense is the prevalent issue. Yet the game-plan clearly shifted and the burden of scoring responsibility didn’t almost exclusively rest on Curry’s shoulders anymore.

As a response to that heightened concern, Curry countered with his finest playmaking production of the series, dishing out 8 assists to 1 turnover. Helping to ease the impact of Curry’s cold shooting spell was Payton, who scored 15 points on 6-of-8 shooting to tie a playoff career-high.

Neither Green nor Kevon Looney can even approximate a similar finishing punch to Payton. He’s not a roller the defense can entirely abandon and his screening induced favorable switches or opportunities for Golden State’s offense.

Porter struggled defending in space, while Looney battled foul trouble all evening. So, Payton stepped up for a postseason-best 26 minutes and crafted necessary interior-scoring verve in addition to his steadfast defensive versatility.

Through three quarters, Tatum had 22 points on 9-of-15 shooting, including 4-of-6 inside the arc. The last number was an absolutely welcomed sight for the 24-year-old superstar, who began Game 5 having converted a paltry 27.4% of his two-point attempts (14-of-51) in the Finals.

Twelve minutes later, he ended with 27 points on 10-of-20 shooting, including 5-of-11 inside the arc — a good, not great overall outing. The leading candidate behind the demise of a five-point, 1-of-5 shooting fourth quarter was Wiggins, whose length, mobility and physicality perturbed Tatum into plays like this.

Golden State is closing off many drives to Tatum’s right all series, so he aimed to take advantage of an early offense opportunity. Instead, Wiggins slid alongside him and swiped down *just* as Tatum began to gather for a finish. That swipe extinguished Tatum’s rhythm, provoked an extra, illegal slide of the back foot and he was called for traveling.

Green’s Game 5 defensive brilliance extended beyond help on the perimeter and guiding Brown away from right-hand drives; he was sensational as an interior helper. During his 35 minutes, the Celtics’ took just six shots at the rim. When he sat for 13 minutes, they took four. Their rim frequency was 10.9% with him on the floor and 20% without him, according to NBA.com.

Boston could hardly score in the paint when he was involved. Shooting and passing near the hoop were chores around him.

Tatum wiggled into the key, with Green awaiting him. Green jutted out his right arm to deter a drop-off to Robert Williams III, swiveled his left arm up and contested a challenging fadeaway jumper.

Wiggins and Payton gave help on the drive, which muddied Tatum’s passing vision as he simply worked to avoid being stripped. Once Green committed to Tatum, Wiggins peeled into Williams, stuck a body on the bouncy big man and ensured any sort of lob would be incredibly challenging to execute or corral.

All 10 of Williams’ points came in the first half, largely due to Golden State neutralizing him as a release valve after intermission. He’s Boston’s lone aerial threat and best means of generating shots around the rim.

There’s simply scant space to function inside the arc against this harmonic Warriors defense. Those efforts grow increasingly laborious when Green and the entire unit are enforcing the rim like they did Monday.