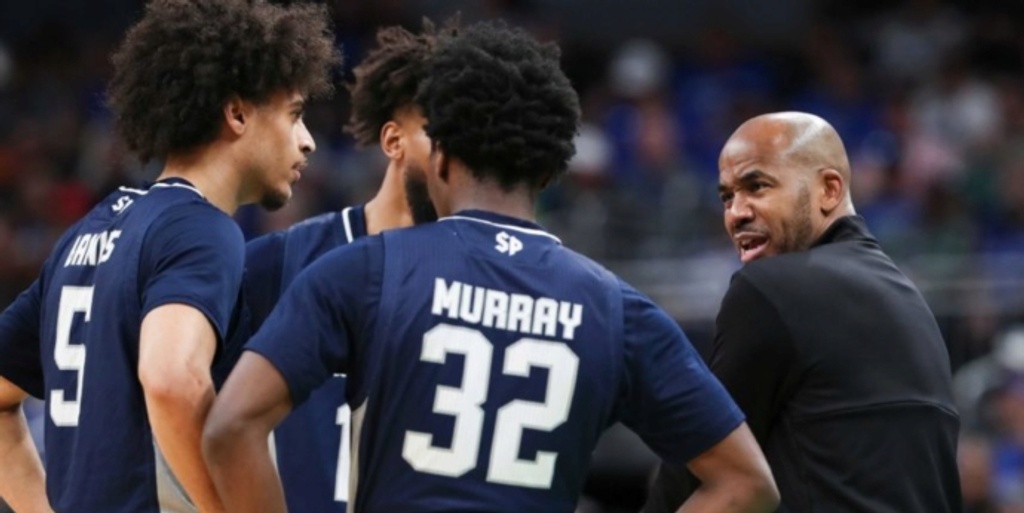 Every year, there are a few individuals who thrive during the NCAA Tournament and ultimately help their stock. This year, one of those March Madness success stories happens to be a coach: Shaheen Holloway.

The 45-year-old head coach led the Saint Peter's Peacocks to the Elite Eight, which marked the first time in NCAA history that a 15-seed advanced that deep in the tournament. After becoming a household name in recent weeks, Holloway has inked a six-year deal with Seton Hall to become their next head coach.

From 1996 to 2000, Holloway played for Seton Hall and he still holds the school record for career assists (681). He was inducted into the Seton Hall Athletics Hall of Fame in 2012. From 2010 to 2018, he was an assistant coach with the Pirates, and now he returns to run the team.

"Life has a way of coming full circle," Holloway said. "This is certainly a full circle moment for my family and I. Seton Hall is near and dear to my heart; it's where I became a man, where I met the love of my life, where I spent countless hours honing my crafts as a basketball player and a basketball coach. To say that I'm excited to get started as the head men's basketball coach at Seton Hall University would be an understatement. Thank you to President Nyre and Bryan Felt for this opportunity. It is a dream come true. Pirates fans, I look forward to seeing you all in the community, on campus and at the Prudential Center."

Holloway was named the 2020 MAAC Coach of the Year, and he led the Peacocks to the 2022 MAAC Tournament title and three straight campaigns with 10-plus victories in conference play (and three consecutive top-three finishes in the MAAC). Under Holloway's tutelage, Saint Peter's produced five All-MAAC selections, the NCAA Division I leader in blocked shots, the MAAC Defensive Player of the Year, and 10 student-athletes that were named to the MAAC All-Academic Team.

"I am incredibly excited to welcome Shaheen Holloway and his family home to Seton Hall," said Bryan Felt, the school's athletic director. "Shaheen is a winner in every sense of the word, and he is not only an incredible coach, but also an incredible educator of young men. He works tirelessly to put his student-athletes in a position to succeed, and he makes them believe that they can achieve anything with hard work and determination. That is evidenced by his historic NCAA Tournament run this month. Shaheen made an unforgettable impact here at Seton Hall first as a student-athlete and then again as an assistant coach, and now we're ready to watch him take over our men's basketball program as head coach and lead our Pirates to further greatness. Welcome home, Coach Holloway!"

Holloway and Saint Peter's became this year's Cinderella story when they defeated 2-seeded Kentucky in the first round, 7-seeded Murray State in the second round and then 3-seeded Purdue in the Sweet 16. Saint Peter's is a very small school with a relatively miniscule budget. so it was shocking to see them eliminating elite programs.