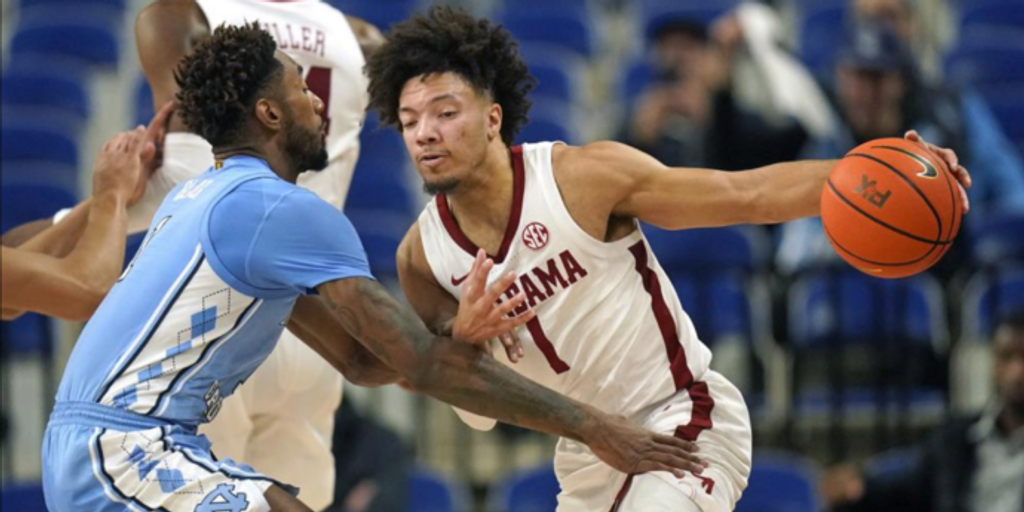 PORTLAND, Ore. (AP) — Mark Sears had 24 points, five rebounds and five assists, and No. 18 Alabama sent top-ranked North Carolina to a second straight loss with a 103-101 victory in a quadruple-overtime thriller on Sunday in the third-place game of the Phil Knight Invitational.

Jahvon Quinerly scored 21 points for the Crimson Tide (6-1), who knocked off the top-ranked team for the first time since upsetting Stanford in the 2004 NCAA Tournament. Charles Bediako had 14 points, 16 rebounds and three blocks.

Alabama forward Noah Clowney took a hard fall on a dunk attempt four minutes into the first half and had to be helped off the court. He did not return.

PORTLAND, Ore. (AP) — Julian Strawther scored 23 points, including 10 in the final 4:07, and Gonzaga beat Xavier in the third-place game of the Phil Knight Legacy men’s tournament.

Each of Gonzaga’s starters scored in double figures. Drew Timme and Anton Watson had 16 points apiece. Nolan Hickman finished with 14, and Rasir Bolton had 13 points and six assists.

Pierre Brooks made all four of his 3-pointers and scored 15 points for the Spartans (5-2). Joey Hauser added 14 points and seven rebounds. A.J. Hoggard had 12 points and nine assists.

After outscoring Michigan State 13-2 in the last three minutes and getting eight points in less than 30 seconds to make it 78-77 with 40.5 seconds to play, Portland rebounded a Spartans miss with 8.1 seconds to go. The Pilots got the ball inside to Tyler Robertson and his shot rolled off the rim, and a desperation putback by Juan Sebastian Gorosito wasn’t close.

Robertson had 16 points, nine assists, seven rebounds and two steals for the Pilots (5-4).

The Tigers (7-0) rallied from a five-point deficit over the final five minutes, starting with back-to-back drives by K.D. Johnson and ending with Green’s scoop shot in traffic.

The Billikens (5-2) missed six straight shots before Yuri Collins’ drive with 20 seconds left. Then Jaylin Williams turned it over with an errant inbounds pass.

But Gibson Jimerson missed a long jumper for Saint Louis and Green went 1 for 2 at the line.

Clark sat out for the first time this season because of a non-COVID-19 illness. The junior is averaging 15.7 points and 7.7 rebounds.

Freshman Adem Bona added 16 points on 6-of-7 shooting from the field in his highest scoring game so far.

The Bruins (5-2) stretched their lead to 20 points in the second half.