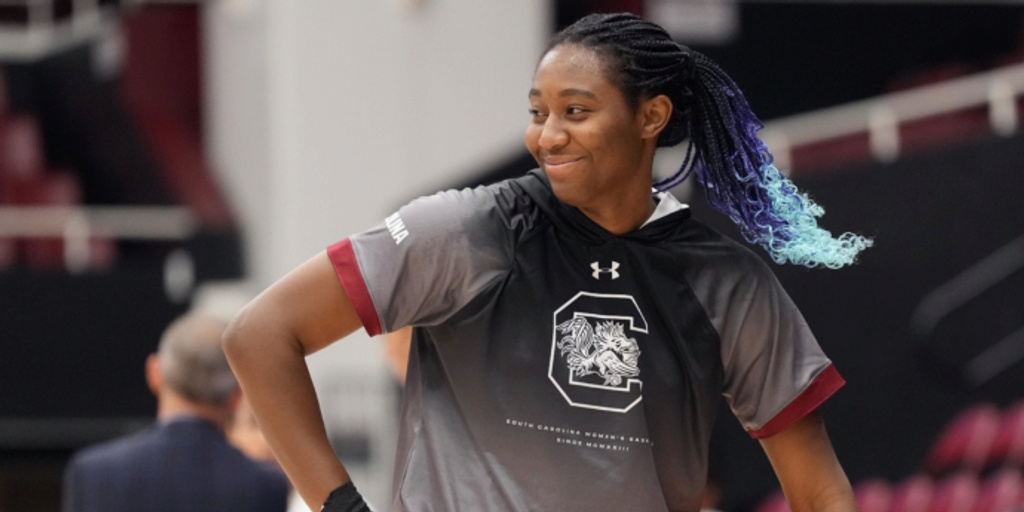 Boston hurt in No. 1 Gamecocks’ win; No. 3 UConn tops Iowa

COLUMBIA, S.C. (AP) — Aliyah Boston missed the second half of No. 1 South Carolina’s game against Hampton on Sunday with her right foot in a walking boot, but reserves Bree Hall and Ashlyn Watkins scored 14 points each in an 85-38 win.

Boston, the reigning Associated Press Player of the Year, took a hard fall on a drive to the basket late in the second quarter and needed several moments to stand up. Soon after, she headed to the locker room before the period ended.

Boston did not come out for the start of the third quarter, returning to the bench midway through the period with a walking boot on her right foot. Boston spent the rest of the game cheering on her teammates, who improved to 6-0 this season and 5-0 all-time against the Pirates.

HONOLULU (AP) — Ashten Pretchel scored 12 of her season-high 17 points in the first half to help Stanford easily defeat Hawaii on the final day of the Rainbow Wahine Showdown.

The Cardinal (7-1) erased an early deficit and held the Rainbow Wahine (1-6) to a season-low scoring output.

Pretchel came off the bench and shot 6 of 10 from the field, including hitting five 3-pointers. She also grabbed 11 rebounds.

Fudd had plenty of help, with Aaliyah Edwards (20 points, 13 rebounds) and three other Huskies (5-0) scoring in double-figures. Edwards was named MVP of the tournament.

Edwards got UConn off to a strong start, scoring 10 points while the Huskies built a 20-14 edge.

Clark and the Hawkeyes then surged with a 13-2 run to begin the second quarter and led 41-35 at halftime. Clark scored 17 points in the first half.

The Buckeyes (6-0) shot 58.6% from the field as all five starters reached double figures in scoring.

North Alabama (3-3) trailed by eight points with less than eight minutes to go in the second quarter, but Ohio State extended its lead on an 11-0 run keyed by five points from Madison Greene.

The Buckeyes held a 59-37 lead at halftime and stretched it to as large as 39 with less than three minutes remaining.

PORTLAND, Ore. (AP) — Deja Kelly scored 29 points to power North Carolina to a 17-point comeback over Iowa State and win in the championship game of the Phil Knight Invitational tournament.

Stephanie Soares led the Cyclones (5-1) with 19 points and 12 rebounds, while Ashley Joens had 18 points and nine rebounds as Iowa State suffered its first loss of the year.

The Hokies established a program record by holding South Carolina Upstate to 24 points on Nov. 14. Longwood passed 24 points when Adriana Shipp-Davis made a layup with 4:44 remaining.

Brinae Alexander hit three 3-pointers in the Terps’ biggest quarter of the season and was 5 of 7 from distance to finish with 17 points. Lavender Briggs contributed 10 points as the three transfers had their biggest outputs of the season for Maryland. Shyanne Sellers added 13 points for the Terrapins (6-2), who went 2-1 in the tournament.

Maliyah Johnson had 15 points for the Panthers (5-2), who only had one less 3-pointer but was outscored by 13 at the foul line where Maryland was 20 of 23.

PORTLAND, Ore. (AP) — Endyia Rogers scored 19 points, including critical back-to-back 3-pointers in the fourth quarter, Phillipina Kyei had a double-double with career highs and Oregon held off Michigan State in the third-place game of the Phil Knight Invitational.

The Ducks led 29-12 when Rogers scored the opening basket of the second quarter but the Spartans slowly came back behind Kamaria McDaniel, who had a season-high 28 points. McDaniel hit a 3-pointer and Matilda Ekh had a steal and layup and Michigan State tied the game with 7:17 to play.

That’s when Rogers, who had a career-high five 3-pointers, scored from distance, the first coming after a timeout and the Ducks regained control.

Morris sank 5 of 10 shots from the floor with two 3-pointers for Texas (3-3). Jones finished with 12 points and 10 rebounds. Rori Harmon had 11 points and Aaliyah Moore scored 10.

The Longhorns picked up their second straight win after a three-game losing streak. Texas fell 16 spots in the AP poll.

Kaitlyn Chen topped Princeton (3-2) with 15 points. Julia Cunningham added 10 points. Ellie Mitchell came into the game leading the nation with 16.2 rebounds per game. She didn’t score and had seven boards.

Maddie Nolan scored seven of her 12 points in a 20-5 run over the final 4-plus minutes and Leigha Brown finished with 11 points, eight rebounds and six assists forMichigan (7-0).

Ja’Mee Asberry scored inside to give Baylor a 75-73 lead with 2 minutes to go but Brown made a layup and, after a missed 3-point shot on the other end, grabbed her own offensive rebound and kicked it out to Phelia for a 3 that gave the Wolverines the lead for good with 48 seconds to go.

Jaden Owens scored 22 points on 9-of-13 shooting for the Bears.

Jordan Horston added 14 points for the Lady Vols (4-4), Jillian Hollingshead and Tamari Key 13 each and Karoline Striplin 10. Jackson and Horston both had five assists and joined Hollingshead with eight rebounds.

ESTERO, Fla. (AP) — Maddy Siegrist scored 25 points to surpass 2,000 for her career and Villanova used a hot start to beat South Florida in the third-place game at the Gulf Coast Showcase.

Siegrist became the third player in Villanova history to reach the 2,000-point plateau when she hit a jumper at 3:46 of the third quarter to put the Wildcats up 50-31.