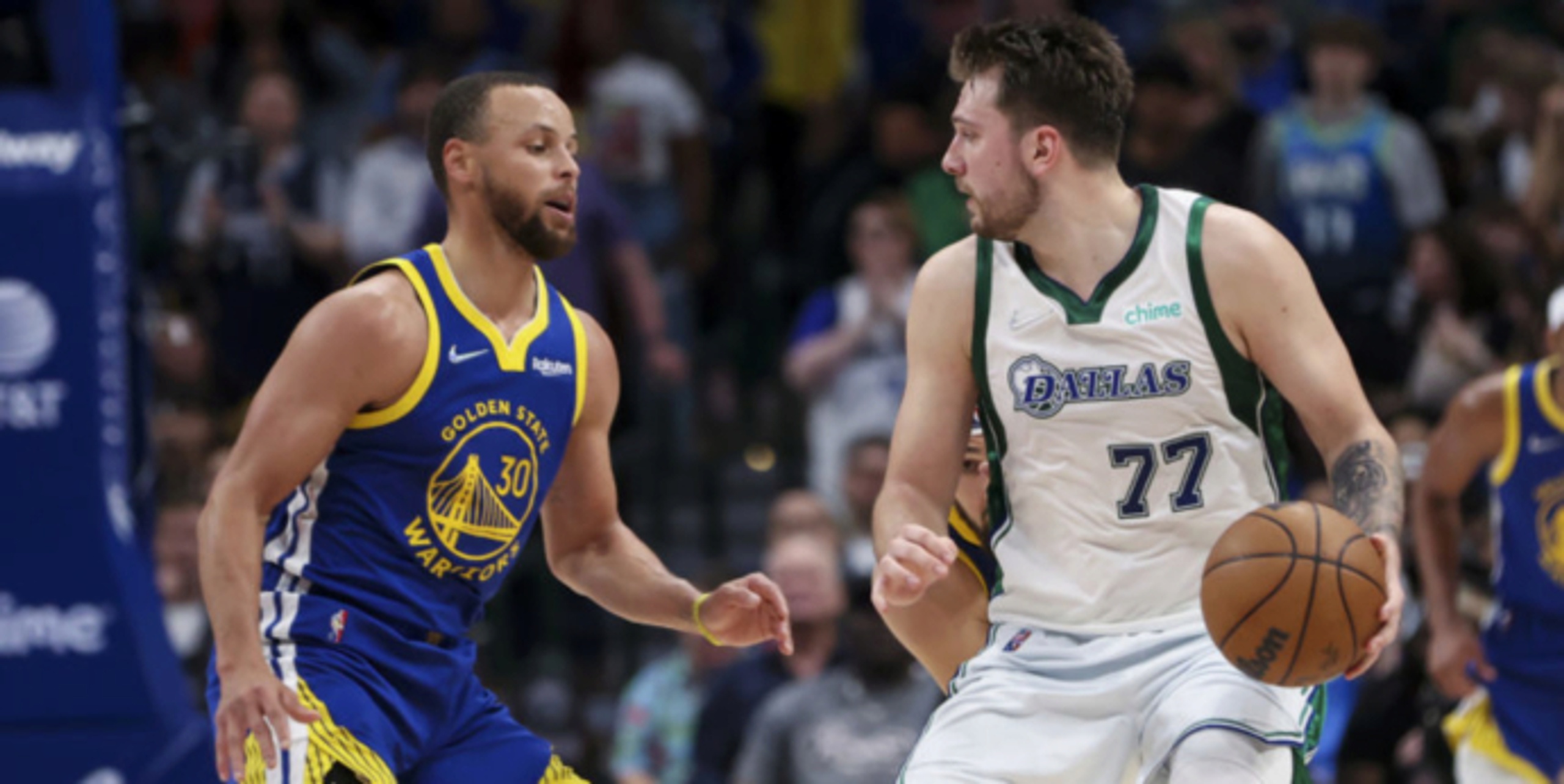 The Dallas Mavericks and the Golden State Warriors couldn't be more different if they tried.

In one corner, you have the #BeautifulGame Warriors. Post splits and cuts galore. Glorious ball movement heightened by the hide-and-seek skills of Stephen Curry, Klay Thompson and Jordan Poole. All three can boogie on you to varying degrees, but they're at their best when they're moving targets. You can't defend what you can't stay connected to.

The Warriors with Curry on the court blitzed the league to the tune of 116.0 points per 100 possessions during the regular season, a mark that would've led the NBA. In the 129 minutes that Curry, Poole and Thompson shared the floor, that number rose to 125.6.

On the other end, you have the methodical Mavericks. Luka Doncic leads the dance — he slightly trailed Joel Embiid for the NBA's usage rate title (37.5% to 36.8%), and is blowing away everyone this postseason (39.3%). While the Warriors dice you up with cuts and movement, the Mavericks make you pick your poison with countless ball-screens.

There is variety in the Dallas half-court attack. You'll see pindowns, stagger sets and Veer action for Reggie Bullock, for example. Even with those ball-screens, they'll flow between traditional high pick-and-rolls, Spain pick-and-rolls and sets that include an exit screen to further place strain on help defenders. A quick example:

That's nasty stuff from Dallas. Bullock as the lone shooter on the weak side to stress Tyrese Maxey as a helper. Jalen Brunson receiving the exit screen from Dorian Finney-Smith to occupy Seth Curry and Tobias Harris. It's a tough scene.

Luka-led offense is elite in its own right. The Mavs generated 115.7 points per 100 possessions with him on the floor during the regular season — slightly below the Curry-led figure, but still a number that would've topped the NBA if extrapolated.

Both teams will need to find answers, obviously.

Dallas found the right blend of switching, soft hedges and all-out traps to stifle the Phoenix Suns' vaunted half-court offense; the Warriors are a different challenge. Golden State has had to deal with a dynamic primary ball-handler already in Ja Morant, but Luka's size and passing ability throws a wrench into that equation.

While both teams approach offense differently, a common ground was found defensively during the regular-season meetings: Hunting the stars.

The Warriors were relentless. Doncic defended 65 picks (16.3 per game) in their meetings, with Golden State generating 1.05 points per possession (PPP) on those trips, per Second Spectrum. Only the Utah Jazz (23.3 per game), funny enough, went after him more frequently.

Keep an eye on those Spain pick-and-rolls from the Mavericks. Well communicated switches are a way to contain the action, but how willing are the Warriors to do that when Bullock — Curry's likely matchup — is the back-screener?

You can see the cat-and-mouse above. It's common for the two perimeter players — in this case, Curry and Wiggins — to switch. But because the Warriors don't want to give that, it's a quick stunt-and-recover from Curry. Doncic is able to string it out while maintaining inside leverage on Wiggins, thus drawing the foul on the drive.

If show-and-recover is going to be the move, it'll be up to the Mavs to counter that. Doncic is good enough to drive past or string out that hedge, but there are built-in scheme things to do. With Bullock being a good movement shooter, don't be surprised if we see flare screens for him.

This is a poor rep, but the template is clear — make Curry work. If Dwight Powell is able to connect on the flare screen, Bullock should have a open three, especially with Kevon Looney in a drop. If Looney steps up, that should be a drive opportunity for Bullock, or, if Curry switches onto Powell, it should be an opportunity for the ball to swing back to Doncic to set up another ball-screen.

For the Warriors, they may be able to attack that matchup a little cleaner. Doncic was often in a bit of a drop, or outright switched when they went after him. That could open up rolls or slips, particularly if they empty the corner first.

They may also opt to keep their flow going. Doncic switching onto Curry is one thing; doing so then asking him to track him off ball is another thing entirely. If there's a positive to take from the Suns series, it's that making him navigate multiple actions within a possession can generate some goodness.

There's plenty to discuss about how these superstars will be defended. Bullock or Finney-Smith will see plenty of Curry. Andrew Wiggins will likely start on Doncic, but we may see some Klay or Draymond Green mixed in.