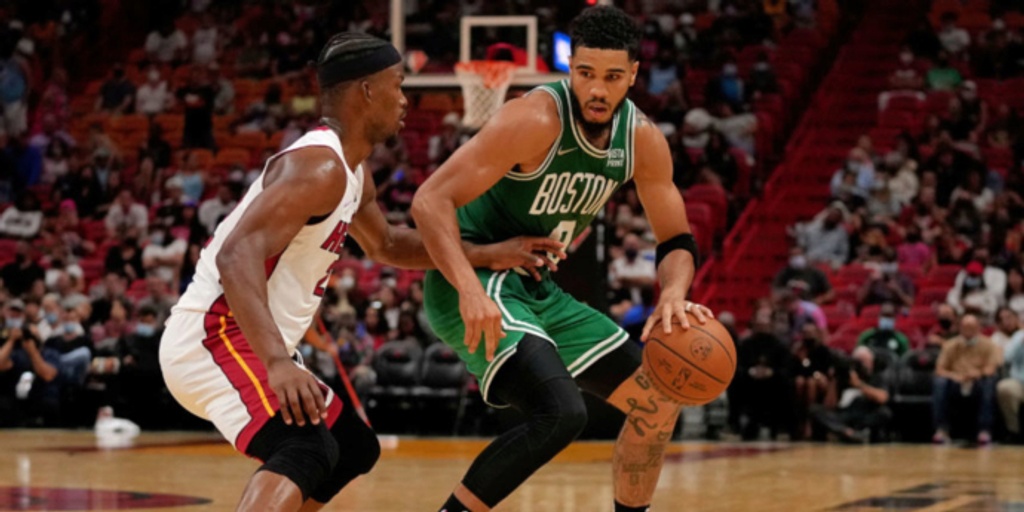 NBA Scouting Report: What to look for in Heat-Celtics series

The Eastern Conference field is set, as the Boston Celtics are set to take on the top-seeded Miami Heat for the second time in three years.

This series will have everything you want. Superstar power (Jayson Tatum, Jimmy Butler) and star power (Bam Adebayo, Jaylen Brown). Former All-Stars that can still give you moments — hello Al Horford, Victor Oladipo and, if healthy, Kyle Lowry.

It also includes fearless role players who can win you a game. For Boston, that's primarily Marcus Smart, Grant Williams and Robert Williams III. Miami has the Sixth Man of the Year in Tyler Herro, an unrelenting PJ Tucker, as well as a stable of undrafted guards in Max Strus and Gabe Vincent.

On the sidelines, Celtics head coach Ime Udoka has been pressing buttons as well as anyone since the turn of the calendar year. Erik Spoelstra has had a strong argument as the NBA's best coach for nearly half a decade. That battle should be a pleasure, especially on the defensive end.

I’m not a coach — I'm just a pun-loving basketball fan with a hankering for film breakdowns. But instead of a traditional series preview, I decided to go into the basketball trenches and devise game plans for both teams. The tone of this two-part series will be a little more informal, but it will still be informative (at least I hope).

Without further ado, here is what to look for in the East Finals between the Miami Heat and Boston Celtics.

We saw these matchups in the most recent outing (March 30). I'd say it's a pretty safe bet this holds to start the series.

Boston's cross-matching intrigues me more than the inverse. Tatum taking Vincent allows him to roam a bit — unless/until Vincent bombs away from three. Putting Smart on Strus is a great way to take advantage of his screen navigation while eliminating Miami's opening script on offense. The Heat tend to open things up with movement sets to get Strus going early.

Keep an eye on the Williams-Adebayo matchup. Grant has taken on Kevin Durant and Giannis Antetokounmpo in consecutive rounds, and has done so with success. His blend of mobility and strength could bother Adebayo, and those same traits can turn any pick-and-roll involving Adebayo into a switch.

At their cores, the Heat and Celtics are switchy groups. In fact, they were the switchiest groups in the NBA — the Celtics ranked first in on-ball switches per 100 possessions (28.8), while the Heat ranked second (28.7), per Second Spectrum. It will be their primary method of flattening out each other's offenses, hoping to bring the game down into the mud.

With neither team playing drop coverage that often — the Heat and Celtics ranked 26th and 25th in drop rate, respectively — it'll be interesting to see who can create openings downhill.

If there's a difference between the two, it's Miami's willingness to dial up the pressure. They'll bust out a full-court press. They're not afraid to trap, particularly if there's only one star on the court. The help is aggressive. That leads to a ton of three-point attempts — the Heat ranked dead last in three-point rate allowed — but eighth in opponent rim rate.

The Celtics can do that stuff, but generally don't have to thanks to their collective size and screen navigation up top. They effectively cut off the rim (No. 2 in opponent rim rate) and they're able to force opponents into more mid-range shots. Only the Phoenix Suns and Washington Wizards allowed a larger share of mid-range shots than the Celtics this season.

Can the Heat find enough cracks to get into the paint and generate good looks from there? Can the Celtics hit enough threes — because they will be there — to loosen things up inside? We shall see.

WHAT TO WATCH FOR: EARLY OFFENSE

He was the catalyst for their elite transition attack. His touchdown outlet passes put pressure on opponents to get back immediately after possessions end. Early clock pull-up threes became a staple during his time in Toronto; much of that carried over in Miami. Lowry converted 48.0% of his transition threes, including a ridiculous 57.1% clip on pull-ups per Second Spectrum.

With him out for at least Game 1, I'd expect Miami to be even more selective with its pushing. Expect a heavy dose of early-clock dribble handoffs.

The Celtics weren't a team that ran often either; they ranked 21st in transition frequency (14% of possessions), not too far behind the Heat's middling mark (14.5%) per Cleaning The Glass. The issue is they didn't come close to the Heat's efficiency when they did push. The Heat led the NBA in transition scoring (1.33 points per possession), while the Celtics were 26th (1.21 PPP).

Boston is more likely to feed one of its bigs early as part of the team's Delay series. In those, Horford (or Williams III) will receive the ball in the middle of the floor while the other Celtics screen for each other. This is a very pindown-heavy group.

The tell is when their center (Horford or Williams III) gets an early pass above the break and acts as a handoff hub. It can be as simple as a pair of pindowns — Tatum receiving one on a side, Brown getting one on the other — to stretch the defense thin.

The Celtics can flow into Chicago action — a pindown into a handoff. It may be a single pindown from the wing to get one of the Jays an early shot or, if the three isn't there, to set up an empty-corner ball-screen.

It'll be important for the Heat to be locked in.

1) Who will win the zone battle?

Not to rehash the top, but we know how both teams want to operate defensively. Switch just about any screen; keep the ball in front. Shade off of (perceived) non-shooters to help cut off driving lanes. Bring the game into the gutter.

Both teams have creation-plus-shooting combos that can bend things if they're clicking. The Celtics may be okay giving up mid-rangers, but that's typically where Butler wants to operate. The Heat may be okay trading rim attempts for threes, but how safe of a bet is that with Horford and Williams shooting a combined 21 of 47 (44.7%) on corner triples?

If either team catches a rhythm, the zone will be broken out.

(Quietly, the Heat weren't a good zone offense during the regular season [0.96 PPP, 19th] either.)

As beautiful as the Heat offense looks when they're screening and cutting all over the place, they have possessions where ill-timed cuts can make life easier for an opposing defense. That's exacerbated when teams go zone — you want to force a zone defender to choose between two players, so improper spacing allows the defense to muck things up without much work.

It's odd to watch the Heat go haywire in the middle of the floor. When a zone is run against their second unit, you feel the lack of playmaking with Dewayne Dedmon at the 5 in place of Adebayo. But with the starters, you sometimes get weird bouts of passiveness.

That's a darn good counter to a 2-3 zone. Butler gets right into his comfort zone with minimal pressure and... kicks out of it? Huh?

On the flip side, this could be a real problem area for Boston though, a team that ranked 27th in zone offense (0.9 PPP) during the regular season per Synergy. And the Heat don't just go zone; they go to all kinds of zones.

Much like the Celtics had to quickly adapt to Milwaukee's physicality after their matchup with the Brooklyn Nets, there may be an adjustment period when the Heat throw out their zone. Per Second Spectrum, the Celtics have seen just five (5) zone possessions in the postseason. You might get that in the first six minutes of Game 1.

2) Who can beat drop coverage when they get it?

This can be somewhat of a Tatum question considering his struggles against the Bucks in Round 2. The numbers weren't great — the Celtics generated a shade under 0.9 PPP on trips where Tatum saw a drop — but the film was more key.

He'd often pass up more fruitful mid-range attempts, instead opting to string out ball-screens and isolate against a late switch. He's a good enough shot-maker to make that work, but it's a tough diet to live on. And against a team like Miami, I'm not sure how many pockets he can afford to pass up. I've written about his lack of a floater before; per Synergy, he's converted just 2 of his 10 runners this postseason, and I'm not sure which number is more concerning.

But this is really a Heat question. Tyler Herro struggled against the Celtics when faced with drop coverage. Between Smart and Derrick White at the point of attack, Herro couldn't consistently shake free. And even when he did, Boston did a good job of providing help at the nail to at least make Herro uncomfortable.

This is an obvious thing to say, but the Heat are going to need him to get going. Aside from (this version of) Butler, Herro's their best shot-creator in the half-court. He'll need to take pressure off Butler, and carry some of the load when he's heading the second unit.

Whenever Lowry is back, he'll need to channel the same aggression from the last meeting (23 points, 16 shot attempts, 12 threes) if the Celtics drop against him. Ditto for Vincent, whose jumper has quietly fallen off a cliff during the postseason.

At the risk of sounding reductive, these may be the true X-factors of the series.

Both players offer fiesty on-ball defense across multiple positions. Both can juice their offenses in the pick-and-roll, particularly with their downhill chops. And both will likely be ignored when they're stationed off the ball, adding a layer of difficulty for their teammates to generate efficient offense.

White hounded Herro when matched up against them, and found enough utility as a ball-mover for the Celtics to win his minutes +11 in 32 minutes during his lone outing vs. Miami).

Oladipo missed all of the regular-season meetings, but he'll likely see Boston's third-best defender when sharing the court with Miami's other creators. His rim pressure is valuable, but his three-point shooting (27.3% this postseason) can swing things.