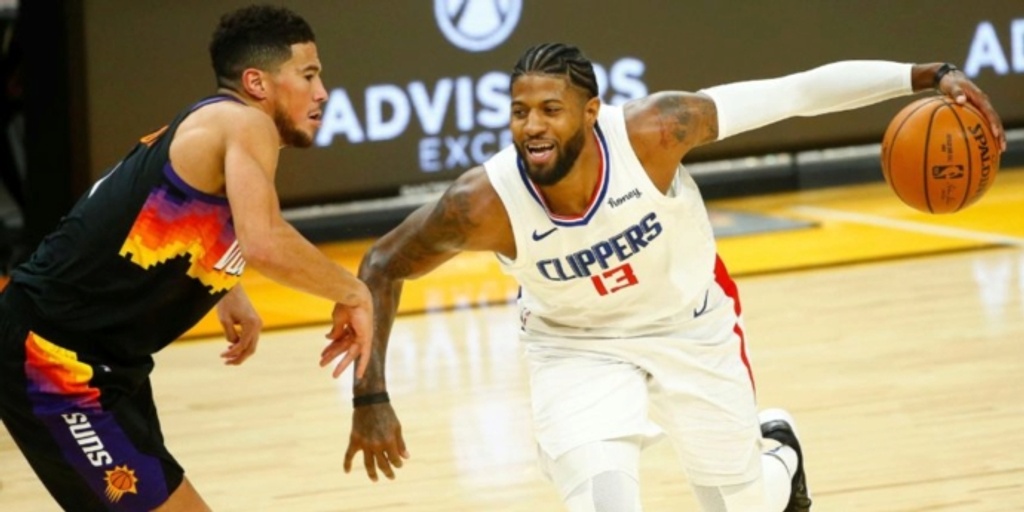 Scouting Report: How the Clippers and Suns will defend each other

This year's Western Conference Finals is a basketball nerd's version of the Spider Man meme. The Phoenix Suns and Los Angeles Clippers are a pair of switch-heavy, pull-up heavy teams with smart coaches that aren't afraid to mix things up. They're also missing very key pieces -- Kawhi Leonard (and Serge Ibaka) for the Clippers, Chris Paul for the Suns.

Have I made my point yet?

I’m not a coach -- I'm just a pun-loving basketball fan with a hankering for film breakdowns. But instead of a traditional series preview, and with Game 1 behind us, I decided to go into the basketball trenches and devise gameplans for both teams. The tone of this piece will be a little more informal, but it will still be informative (at least I hope).

First, let's look at how the Los Angeles Clippers will try to stop the Phoenix Suns.

The Nicolas Batum-at-the-5 lineup deserves a shot considering the success it had against Rudy Gobert in the last round. Sizing back up and inserting Ivica Zubac back into the starting lineup remains an option.

Something to watch for: Ayton offers more as a scorer than Gobert does, especially on the block. His 0.93 points per possession (PPP) on post-ups this season outpace Gobert's mark (0.62) by a solid margin. If Ayton is able to bully Batum -- or any of the Clipper wings -- it may call for the Zubac adjustment.

The Suns may have the most versatile pick-and-roll attack in the NBA. Drag screens in transition. Screen-the-screener actions from the wings. A buffet of options out of the HORNS alignment -- a player in each corner, and a player stationed at each elbow, for those who aren't familiar.

(For the nitty-gritty of their playbook, I highlight suggest this piece.)

Not only can this team get you in rotation with their variety of ball screens, they have built-in counters whenever you begin to figure things out. The switches have to be on-point and physical to prevent easy slips. When in drop, the backline will have to be on point. Pull in a bit early to take away easy rolls if necessary. Sprinkling in some zone could be a rhythm-breaking option in spurts.

Booker is one of the most complete offensive players in the sport. Smooth off the dribble, physical when getting downhill. Superb footwork. Early reps as a point guard helped instill all the basic pick-and-roll reads.

There isn't a full-blown weakness to hammer home, which has allowed him to flourish during the postseason (28-7-5, 61.5 True Shooting %) so far. He wasn't as great against the Clippers this season (23-5-5, 60.6 TS); the absence of Paul (at least for the beginning of the series) should make it a little easier to hone in on him.

Major Key: Cut Off His Runway

It's easier said than done, of course, but you have to keep Booker off his spots. He's too good inside of the arc as a scorer, and he'll have an easier time picking out passing reads if he's able to pressure the rim if there's no friction beforehand.

If Zubac is in the game, he may need to defend pick-and-rolls closer to the level of the screen. Playing deep drop is inviting Booker to boogie his way into the mid-range area, get his defender on his hip, and fire away.

This is an early offense example, but you can see the issue with letting Booker get downhill with a ton of space.

Playing the big higher can be a counter to throw him -- and the Suns' offense -- out of rhythm. Force him to string out those ball screens and trust the help behind the action.

The Suns go to "Chicago" action here, though one would wonder why they're running it inside the arc. At any rate, Nicolas Batum goes under the handoff. Luke Kennard is there to provide nail help so Booker can't flow into an easy pull-up at the right elbow.

Booker reverses course, only to be met by Zubac on the other side of the screen. The left elbow pull-up isn't there either. Booker retreats, then attempts to drive past the hedge. There's no clean driving lane, and no easy pass to make.

Now, there were a couple of windows. On the second retreat dribble after the hedge, Dario Saric is available. Booker loves jump-passes (something to keep an eye on), so that isn't completely out of his wheelhouse. But that's a tough play to make.

As he nears the end of the drive, you'll notice Lou Williams pulling over from the weakside corner. Bridges is wide open. A jump-pass to Bridges is available, but again: that's tough. If you're tasking Booker to make LeBronian passes on a consistent basis, you'll be in a good spot as a defense.

It's important to note that this isn't a foolproof plan, only one to make things more difficult for Booker. Here's a possession from earlier in the quarter.

Serge Ibaka doesn't bring enough funk, while Batum's footwork and positioning is awful. Booker's able to flip directions without any real ball pressure, and that allows him to hunt out the mismatch inside.

(This was a "good option vs great option" scenario for Booker. Considering just how open Bridges is, I'm not sure which is the great option in this case.)

One of the Ayton/Crowder/Bridges triumvirate would be the answer under normal circumstances, but nothing's quite normal about this season, is it?

Beyond that, Paul's pull-up game will be under a microscope in this series. He's seen a steady dose of drop and at-the-level defense throughout this postseason. The Clippers are a switchy bunch, and this isn't the Hornets Era Paul that could blow by virtually anyone.

Paul will hunt bigs whenever they're out there. Mr. Zubac, I'm looking at you. This will absolutely be a mini-battle that could swing the series.

Now let's take a look at how the Suns will try to defend the Clippers.

This should be pretty straightforward. If the Clippers go to their Batum-at-the-5 lineup as they did some in the opener, you could make the argument for flipping a couple of matchups. Maybe Ayton could "guard" Mann, Booker could take Batum and you just switch actions if necessary.

The Clippers want to spread you out. They want to bomb you away from three. Ask the Jazz how difficult it is to keep them from establishing a rhythm.

Without Kawhi Leonard, the Clippers are short their best overall player and their best rim-pressure guy. Paul George and others (namely Reggie Jackson) have stepped up in that regard, but it should be a little easier to keep things in front if the discipline is there.

Paul George is an absolute stud.

He was an absolute menace during the regular season series (32-7-4), and has been a menace during the postseason (26-9-5) so far. He's a three-level scorer in the purest sense of the word, able to fire from deep off the bounce, flow into pull-ups (more on that shortly), or put his head down and get dirty buckets at the rim.

With no Kawhi, George easily becomes priority number one to slow down.

George, for better or worse, is a pull-up artist. His high release point makes his shot incredibly difficult to bother. Add in his smooth handle, and you have a guy that can shoot over the top of you and get to the jumper whenever he wants to.

But with that, he can lean on it a little too much. One of the shifts for the Clippers this season, and especially this postseason, has been George becoming a more willing driver.

Sending him to his weaker hand is a tendency play. Per Synergy, George pulls up nearly 67% of the time when driving left in isolation situations. When going right, that percentage drops to 42.9% -- still his most frequent action, but he's much more willing to drive (38.1%) and get into the teeth of the defense when going right.

Even outside of isolation situations, that tendency holds for George. Peep his pick-and-roll film, and you'll notice a healthy amount of those possessions that end in paint touches come with him driving towards his dominant side. If he snakes, resets and gets the ball in his left hand, you can bet he'll be looking to set up a pull-up or stepback.

You have to recognize that you're still choosing the lesser of two evils with a shade. George may be less inclined to pressure the rim when driving left, but he's much more comfortable getting into his jumper. The Clippers love beginning George-led actions -- traditional pick-and-roll sets, drag screens in transition, staggered screens off-ball -- on the right side of the floor so George can work right-to-left.

There's only so much you can do with him. Limiting his ability to get downhill -- thus limiting some of the drive-and-kick opportunities that could get others involved -- may be a safer bet.

Jackson's playoff run -- 16.6 points with a 61/44/92 shooting split -- has quickly shifted from "it would be nice if he could keep this up" to "he needs to keep this up" with the injury to Kawhi. He doesn't have the luxury of being a luxury anymore.

In Jackson, the Clippers have an end-of-clock bailout option to complement George. He's a spot-up threat that can loosen things in the half-court. He's a guy that can get to the rim and straight-up make things happen.

Thus far in the postseason, Jackson ranks in the 75th percentile or better as a pick-and-roll scorer (93rd percentile), spot-up threat (90th), and isolation scorer (76th). He can complement his scoring chops with basic passing reads, but he's wired to get buckets. Slowing him down could really hinder the Clippers' offense, because it's not like he'll get gun-shy.