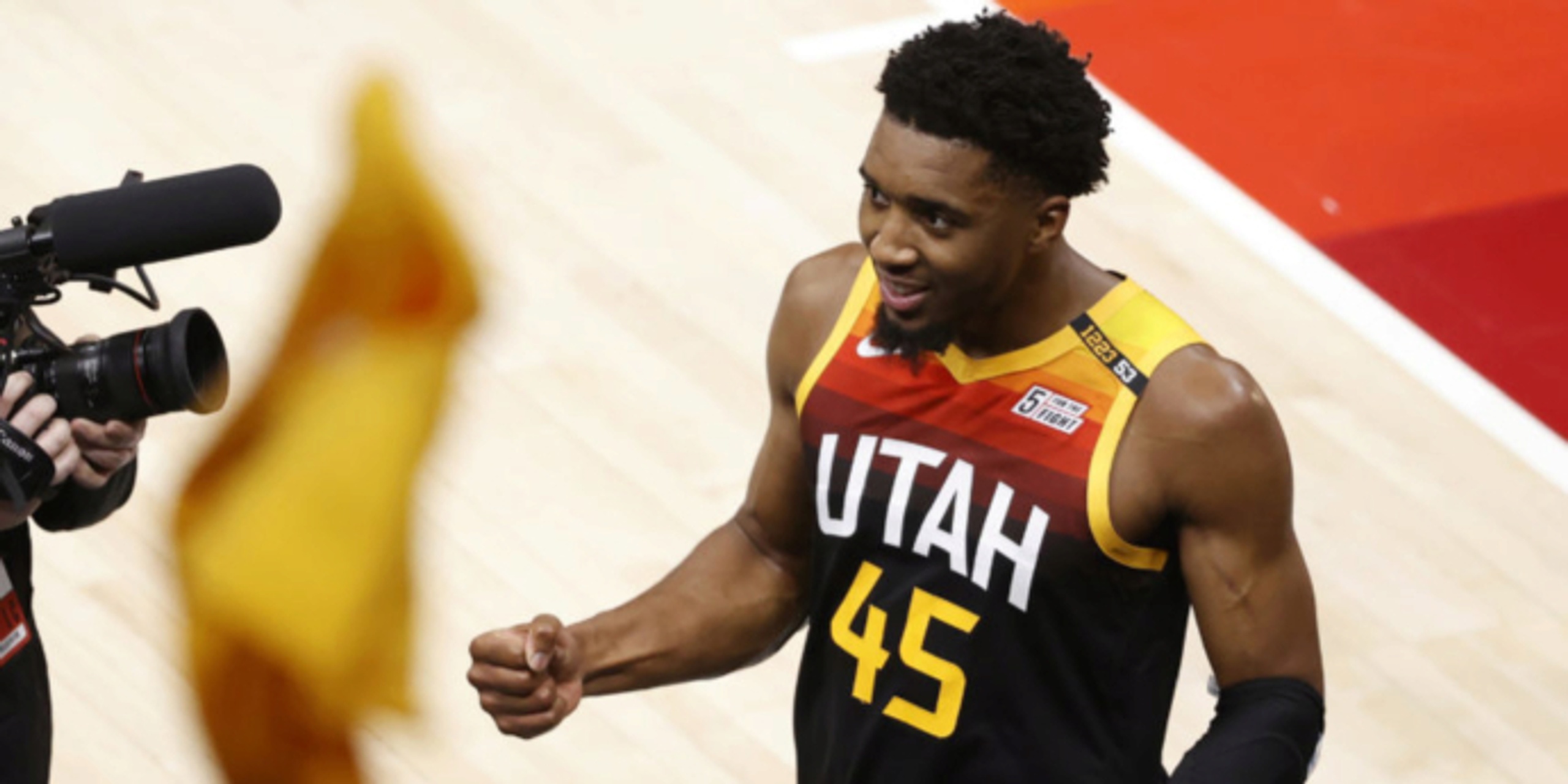 We're reaching the point where there is no good answer for Donovan Mitchell in a playoff setting.

The numbers speak for themselves: 32.9 points with a 60.9 True Shooting percentage through his first eight games of the postseason. A 43% clip on nearly 11 threes per game is patently absurd.

Beyond the numbers, the way that Mitchell is going about this has been eye-opening. Base schemes just haven't worked.

Drop coverage has invited Mitchell to pull-up at will. Straight drives into shots, screen rejects into open pockets. You name it, he's done it.

Switching has also been futile. Mitchell has been diligent about hunting mismatches. Players at a speed disadvantage have been dusted by Mitchell. Not switching quickly enough has left wide enough windows for Mitchell to pull-up against.

The Clippers have had to break character. Not only have they limited the amount of time they've had a traditional center on the floor with Mitchell, they've dialed up their aggression with their smaller units. They're sprinkling in doubles to throw off the rhythm of Mitchell's attacks.

It's a gambit that has succeeded -- at least compared to the other base schemes. It's also a gambit that Mitchell is starting to get comfortable with.

We're starting to see more possessions like this, where Mitchell sees where a double is coming from and attacks the opposite side. It's not just the method of attack, it's how quickly he's attacking.

The Leap may be upon us, folks.

[Insert fancy intro about how Breanna Stewart isn't the only good player on the Seattle Storm here.]

We'll start with a couple of stats.

Among 32 players that have logged at least 50 pick-and-roll possessions this season (passes included), Loyd ranks eighth in efficiency (.904 PPP). Among the seven players above her in that ranking, only Skylar Diggins-Smith (15.6) is averaging more possessions than Loyd (12.4).

Put another way: Loyd is one of the best high-volume pick-and-roll threats in the sport.

Loyd's handle is tight. She combines that skill with superb footwork, allowing her to create space and fire on a whim. Watch how quickly she reads the coverage (ICE/"weak"), and how easily she flows into the jumper.

Loyd is also a strong passer. I enjoy how quickly she recognizes passing windows, as well as her overall ball placement. She might just be the best entry passer in the sport because of it. She's also wildly good at hitting slips, an element that makes quick-hitting pick-and-rolls with Stewart impossible to defend.

Loyd doesn't just get busy with the ball in her hands. She's a strong off-ball mover, able to cut into open space when attention is paid elsewhere. Her ability to balance herself carries over to her off-ball screen usage. Not only is she experiencing a career-year as a three-point shooter (39.5% on 5.8 attempts), that production is coming off a heavy dosage of looks like this.

Combining that kind of off-ball utility with her on-ball chops is why Loyd is one of the most dangerous offensive players in the W.

Lost in the fun of Kevin Durant's historic night and the Milwaukee Bucks' insistence on playing stu-, er, less-than-optimal basketball, was Jeff Green lighting it up beyond the arc.

Green dropped 27 points on Tuesday night, joining Durant (49) and Blake Griffin (17) as the only Nets to score in double-figures. Green went 7-of-8 from deep; let's just say this is not a thing that Green, a career 34% three-point shooter, does with any regularity.

Beyond the hot shooting night, I was impressed with his defense. He found himself matched up with all three of the Bucks' star players at different points, either switching ball screens or defending (stagnant) isos. He more than held his own, particularly against Giannis Antetokounmpo in the second half.

It's unreasonable to expect that kind of shooting performance from Green again, but it's important that he does offer some spacing. He has the ball skills to attack closeouts. Defensively, he has the mobility to hang when switching, and he has enough strength to make post-ups difficult.

The Nets have missed Green's versatility; Tuesday night's game was a great example of what he can bring to the table.

Okay, in all seriousness:

Some simple, yet effective stuff from the Hawks here.

John Collins and Clint Capela set up like they're about to flow into Double Drag, but Trae Young calls for something different.

The something different: some screen-the-screener action involving Bogdan Bogdanovic.

Capela sets a screen for Bogdanovic to come off, then Bogdanovic "ghosts" the screen for Young. Since the Sixers don't want to switch Seth Curry onto Young, Curry simply shows. Ben Simmons stays home, which puts two to the ball. Bogdanovic ends up getting an open three out of it.

This is freaking beautiful execution.

Kelsey Plum (glad to see her back!) flies off the baseline exchange, lifting to the left wing. Destiny Slocum pitches the ball inside to Hamby as Plum finishes the first part of her route, but peep the weak side. You'll notice that the same thing is happening. This is essentially an option play.

Slocum chooses the side with Hamby and Plum. As Hamby receives the ball, Plum flips the funk and goes backdoor. This feels like a variation of "Blind Pig" action. Not 100% sure, but I dig it either way.

I will never get tired of watching Chris Paul pull strings in the half-court.

Much like the Hawks example up top, the Suns give a Double Drag look. The Nuggets are playing drop coverage with JaVale McGee (loosely defending Dario Saric), but are hedging hard on the first screen.

Oh, wait, are they playing ICE coverage? Look at the way JaMychal Green positions himself.

It may not be clear, but it ultimately doesn't matter either way. Paul sees an opening, so he cuts his route short and flips the ball ahead to Saric. Cameron Johnson reverses course immediately, and Saric acts in concert with Johnson by flowing into a handoff. With McGee below the free throw line, there's no hope for a contest.

There is plenty of high-level basketball content out here if you know where to look. I wouldn’t be where I am as a writer without reading a ton of Zach Lowe or Chris Herring or Caitlin Cooper or Mirin Fader or... well, you get the point.

Anyway, here are some -- not all, but some! -- of the stories I’ve read lately that I think you should check out. Their Twitter handles will be linked under their names, so click and follow if you don’t already.

Gibson Pyper, also known as Half Court Hoops on Twitter and YouTube, wrote a breakdown on Spain pick-and-rolls. If you thought I wasn't sharing this, you don't know me at all.

PD Web goes deeeeeep with a breakdown of Jalen Green.

Feels like Jackson Frank has been in here every week, but his feature on Mikal Bridges is well worth your time.

Katie Heindl on Miami's abrupt end, and the perceptions around it.

Zach Lowe's breakdown on the layers of the Suns' pick-and-roll attack is tremendous stuff.

Tyler Tynes is one of the best feature writers on the planet. This one, on Dawn Staley, won't disappoint.

Caitlin Cooper writes her farewell to the short-lived Nate Bjorkgren era in Indiana.