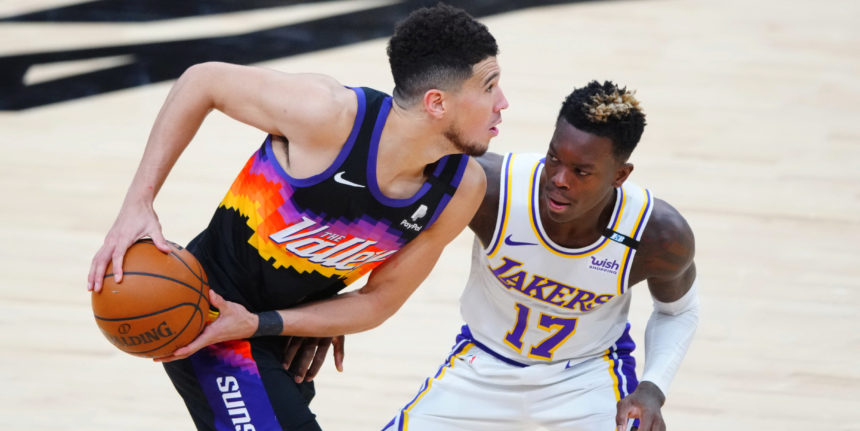 Pardon the jurisdictional bias, but the best thing to see over the first weekend of the NBA playoffs was the crowd at the raucous Madison Square Garden (the “World’s Most Famous Arena”) -- even if the final result was not exactly what the New York Knicks had in mind.

Anyone who has been to New York over the past 14.5 months can understand, but for those who haven’t, here is the deal: New York City has struggled to return to normal since shutting down in March 2020. For example, 110,000 restaurants went out of business during the pandemic. NBA teams who have come into Manhattan and Brooklyn likened it to the post-apocalyptic scenes in the Will Smith movie “I Am Legend” as they wondered why there were no people on the streets.

The trains that run beneath MSG are still largely empty, although the subways are much more crowded than they were just a month ago. And seeing so many Knicks fans suddenly congregating together, led by Spike Lee and Tracy Morgan, was truly a sight to behold after keeping to ourselves for more than a year.

The TNT broadcast duo of Spero Dedes and Greg Anthony could've captured this moment even better had they been in the building and felt the energy, but they were broadcasting this game remotely. Let’s hope the networks get the broadcasters back into the arenas sooner rather than later.

The crowd of 15,047 made it the largest indoor event to be held in New York since the pandemic began.

"Having fans, I think, is great," Knicks coach Tom Thibodeau said. "But we've got to play better."

Especially Julius Randle, whose regular-season success against the Atlanta Hawks was expected to continue in the postseason. But the likely Most-Improved-Player-award winner went 6-for-23 from the field, and the Hawks eked out the Game 1 win on Trae Young’s game-winner with 0.9 seconds left after he singlehandedly broke down New York’s defense. Young is a good villain to have around as the series waits to resume Wednesday night. If ever a guy was channeling Reggie Miller, it was Young last night. He crossed over Frank Ntilikina four times on the game-winning drive.

The most surprising result of the weekend came in the last of the eight games when the Memphis Grizzlies defeated the top-seeded Utah Jazz, 112-109, for the first win by a No. 8 seed since the Orlando Magic defeated the Milwaukee Bucks last season in Game 1 in the Bubble. That one eventually turned into a 4-1 series win for the Bucks, so we shall see where this leads the Grizzlies.

But give Taylor Jenkins’ crew their props. In the past week, they have ended the seasons of Gregg Popovich and Steph Curry and now hold a 1-0 lead over the best three-point-shooting team we have seen in quite some time. They’ve only won one game, but every year, there is at least one series that’s won or lost in Game 1; maybe this is that series. Donovan Mitchell was reportedly upset about being a last-minute scratch, but the Jazz already announced that he will return in Game 2.

What else was striking about the weekend’s eight games? Let’s go series by series:

Lakers-Suns: Sunday provided a lesson of how time can stand still when emotions and the referees get involved. Early in the fourth quarter, there was a sequence in which Chris Paul got under LeBron James on a box-out and sent him to the floor, Cam Payne and Alex Caruso got into a dustup (Payne picked up two technicals upon review and was ejected) and Kyle Kuzma’s three-shot foul against Devin Booker was overturned upon review. In real time, it took more than 10 minutes to play just 30 seconds, and the Lakers were not able to use the extra time to their advantage. They are going to have to take another look at how they are defending the center position after Deandre Ayton outplayed Anthony Davis while Andre Drummond spent just 19 minutes on the court. James and Davis combined to miss five of 11 free throws, which is a pattern we saw to varying degrees from game to game.

Heat-Bucks: The award for the weekend’s best finish goes to the game that was the first one played on Saturday afternoon, when Khris Middleton’s jumper with 0.5 seconds broke a tie for the game-winner. A couple of other observations: Jimmy Butler’s lower back is taking a beating that makes you remember Mike Tyson’s famous line: “Everybody has a plan until they get punched.” With Butler shooting 4-for-22, the Heat really had no business being in the game this long but were helped by Giannis Antetokounmpo going 6-for-13 from the foul line. The winners went 5-for-31 from three-point range.

Blazers-Nuggets: The award for most deceiving crowd shot goes to this game, which had the largest attendance of the season in Denver – 7,732, almost none of whom were sitting within the frame of the broadcast shot from high above center court. Denver could be in trouble here, folks, as Jamal Murray’s scoring is not being replaced by Michael Porter Jr. (1-for-10 from three-point range) or Aaron Gordon (16 points). I would not be surprised to see Markus Howard, last season’s NCAA scoring leader at Marquette, get an even longer look tonight after he played 20 minutes in Game 1. It’s no surprise that Nikola Jokic had only one assist after his teammates missed 25 of 36 three-point attempts.

Mavericks-Clippers: Los Angeles led 98-95 with just over six minutes left but then had just one bucket (and two missed free throws, both by Marcus Morris) in the next nine possessions to fall behind by seven before Paul George dunked with 1:15 left. A game-closing 16-5 run has the Mavs up 1-0 against the team that tanked its way into the non-Lakers bracket, and we shall see if the karma police continue to make them pay.

Celtics-Nets: Another thing that is lost on folks not located in the New York metropolitan region: Almost nobody is talking about the Nets. It is all Knicks, all the time. And this series appears as though it is going to be a walkover, which should keep the current dynamic in place at least through Wednesday, when Game 2 of Hawks-Knicks is played at Madison Square Garden. Despite Kevin Durant going 1-for-8 on three-pointers, the Nets outscored the Celtics by 17 in the second half in what appeared to be a return to the cruise-control mode they displayed shortly after James Harden was acquired from Houston. No free throw villain in this one just yet.

Wizards-Sixers: Russell Westbrook stepping out of bounds off two missed free throws by Ben Simmons with 38 seconds left (Simmons was 0-for-6 from the line) was a huge mistake, and another empty Sixers possession followed by a missed three by Westbrook with 17.8 seconds left ended Washington’s final chance. Tobias Harris (37 points) showed once again that he does not get enough credit for Philadelphia’s success. Washington had 38 points of bench scoring, something they will continue to need if they are going to be competitive in this series.