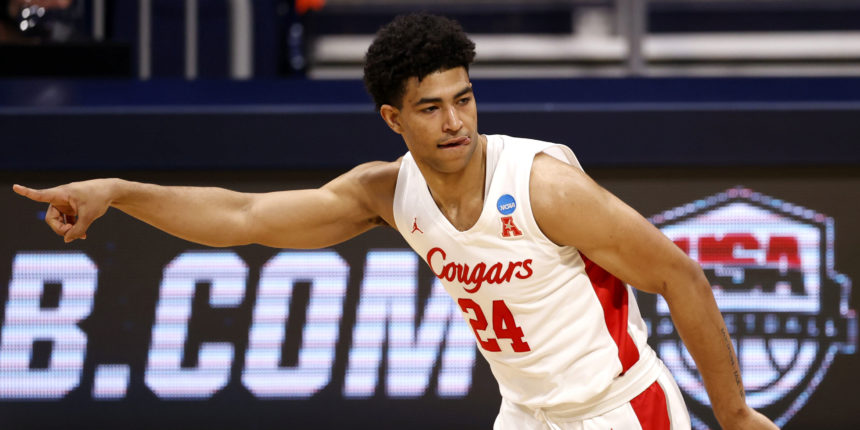 Perhaps no player made more waves in scrimmage action at this year's NBA Draft Combine then Quentin Grimes.

The sweet-shooting guard out of Houston scored 27 points in the final scrimmage of the Combine, and shot a blistering 12-of-20 across two games in Chicago. But Grimes also turned heads with some impressive passing and on-ball defense.

Even before his second performance, Grimes said teams have been taking note of his all-around development.

"[Coaches] love how mature I've grown -- really came into myself, came back to the player that everybody knew I could be," Grimes said during media availability on Thursday. "They just really loved my transition from the University of Houston to show my own kind of whole game, my jump shot and my shooting ability, and [Thursday] I showed my overall package: rebounding, playmaking, shooting."

Grimes' signature skill is his perimeter shot. He made over 40% of his three-point attempts at Houston last season, which helped him average 17.8 points per game as a junior. Grimes fully expects that to translate to the NBA level.

It's been a winding road for the 6-foot-5 sharpshooter. Originally considered a top-10 high school recruit, Grimes struggled as a freshman at Kansas, and ended up transferring to Houston after just one season. He spent his sophomore year re-working his developmental process under coach Kelvin Sampson before breaking through as a junior.

"I know everybody had expectations for me to be one-and-done, but obviously it didn't turn out like that. Now, going to the right situation with Coach Sampson -- he kind of prepares you for life," Grimes said.

"He's a super tough coach; he's gonna hold you accountable every day. No days off, got to give 150 percent effort. So I just come in with a mindset every day, to come in here and play as hard as I can, he'll really try to let you be able to play freely and play your game."

As of Thursday, Grimes had worked out with the Boston Celtics and New Orleans Pelicans, while also meeting with a host of other teams, including the Milwaukee Bucks, Denver Nuggets and Dallas Mavericks. He says he's received positive feedback about his offensive and defensive potential on the ball. As draft day inches closer, Grimes wants to continue the positive momentum he's built up over the past year.

"[Being drafted] is what you dream about; it's what you work your whole life for," he said. "I feel like it hasn't really clicked in yet because I've been so focused on just taking it one day at a time and just trying to improve myself and improve my game every day. But I feel like creeping up to those last couple of days before the NBA Draft, then it'll probably probably hit me for sure."

Check out our 2021 NBA Mock Draft page, which includes scouting reports for each prospect.