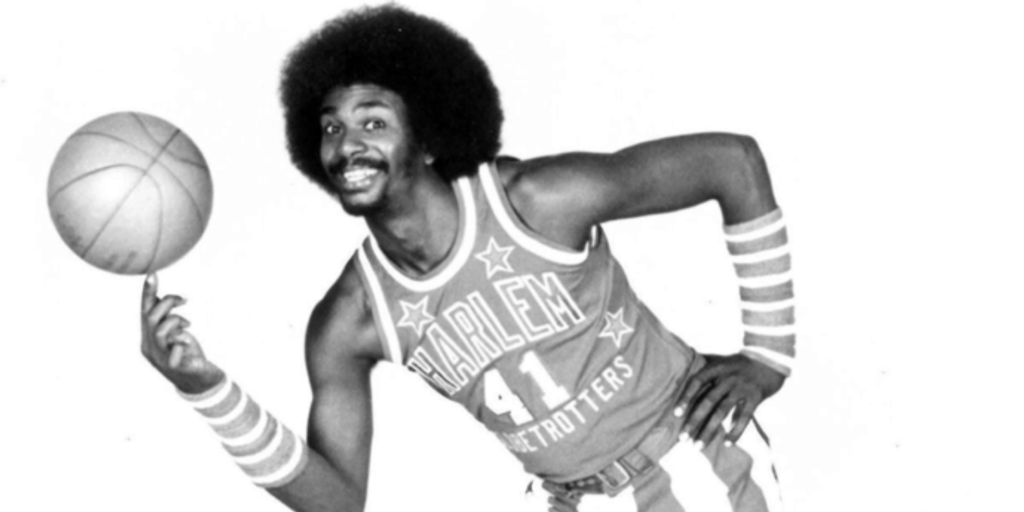 A showman who has been with the organization since 1977 — as a player, coach and director of player personnel. Dunbar, a college All-American at the University of Houston, is often considered a precursor to Magic Johnson, because of his size — 6-foot-10 and unique ability as a ball-handler.

Dunbar played a year of pro basketball abroad before calling it quits on a “straight” basketball career. He was working at a jewelry story in Houston, when he signed a free agent deal with the Rockets. It was a deal that ultimately didn’t lead to an NBA career, but it did open the door to the Globetrotters.

Nicknamed "Sweet Lou" as a Globetrotter, Dunbar has a gregarious presence that radiates, even over the phone. When he tells a story, he often punctuates it with an infectious chuckle. Separate from our conversation regarding being racially profiled by Santa Barbara Police, here's a look into a talk we had recently:

Who were your basketball heroes growing up?

Lou Dunbar: My first one was Wilt Chamberlain. Coming up I wore the number 13 because of Wilt – I loved Wilt. Going into high school, Elgin Baylor. I switched my number to 22 because of Elgin Baylor.

Did you ever meet Wilt?

Dunbar: My coach, Tex Harrison played with Wilt; they were roommates. I met him through Tex Harrison in Hawaii – he used to live over there. We went out for lunch or dinner. From what I saw, Wilt was a great guy.

Why do you think that generation of players is so overlooked or forgotten today?

Dunbar: Nobody knows who they are. You have to be a student of the game. You can’t just be a student of this era. Everything they told Wilt he couldn’t do, he did it. Look at the record books, he’s in every category – then you have guys like Oscar Robertson. Back then they played real basketball, wasn’t none of that crying. You come to the well, if you want to drink, you better be ready to drink.

Even guys like David Thompson who came out when I came out; David Thompson was something special; but you don’t hear people talking about him – David Thompson was a beast, man. He invented the alley-oop — he and a little guy, Monte Towe. My senior year of college we went on an All-Star tour; every game we played, David Thompson got an alley-oop the first play of the game – he was great at going backdoor, he’d fake up top to the free throw line and go backdoor and Monte Towe would throw that alley-oop.

Who were the guys that showed you the ropes when you first became a Globetrotter?

Dunbar: My first year I played with Meadowlark Lemon and Curly Neal. I tell these young guys today the opportunity they have is so much different than when I came up. They used to use my young legs for the first dunk of the game and then after that I’d sit and watch like I had bought a ticket.

Meadowlark gave me one of the greatest compliments I had being a Globetrotter: he said I picked this up better than anybody who ever played with him – I knew all the positions on the floor.

My second year I played with Geese Ausbie and Marques Haynes.

As far as being a showman, Meadowlark was guy who did stuff by timing. Every show, you know Meadowlark was about to do this, or that. Geese, we never knew where he was – he was spontaneous, I loved that about Geese. He was hilarious; he just went off the cuff. I picked up a little of everything from both of those guys.

What made you come back to the Trotters year after year?

Dunbar: This is not for everybody. Tex Harrison used to say that all the time. Nobody travels like the Globetrotters: most of time we play seven days a week and sometimes twice on Saturday and Sunday. It’s not an easy gig so you have to have some love for the game and this organization to be able to do it day in day out.

Regardless of how many games we played a week I loved what I did. I had the best job in the world. It was kind of like Santa Claus. We put smiles on people’s faces every day. A lot of people get up and say man, I don’t want to go to work.

You are a Houston guy. Did you ever play at the Fonde Rec Center?

Dunbar: Come on man. You can’t come to Houston and not do that. Once we got off the road that’s where we went to play. I recruited Moses Malone coming out of high school, he was down there. All the pros – John Lucas – everybody; whose who in the game of basketball and they went to the Fonde Rec Center.

With the Globetrotters, we do fool around a bit, but when we come back home, we go to Fonde and get it on.

How do you think you’d have been as an NBA player?

Dunbar: I don’t think I’d have been bad. I went that route and was tired. I played a year in Europe – came back signed a free agent contract with the Houston Rockets and was in LA in the summer pro with those guys. They would play me sparingly. I thought I did alright when they played me.

There comes a point in your life when you have to move on.

People from the Globetrotters asked me to come to training camp and everything else is history. I’ve enjoyed what I have done. I think I left a stamp on some people’s lives.  It’s been a good run. It’s like everything else you have your good times you have your bad times. I can tell you the good outweigh the bad. I’d never trade it for anything in the world.