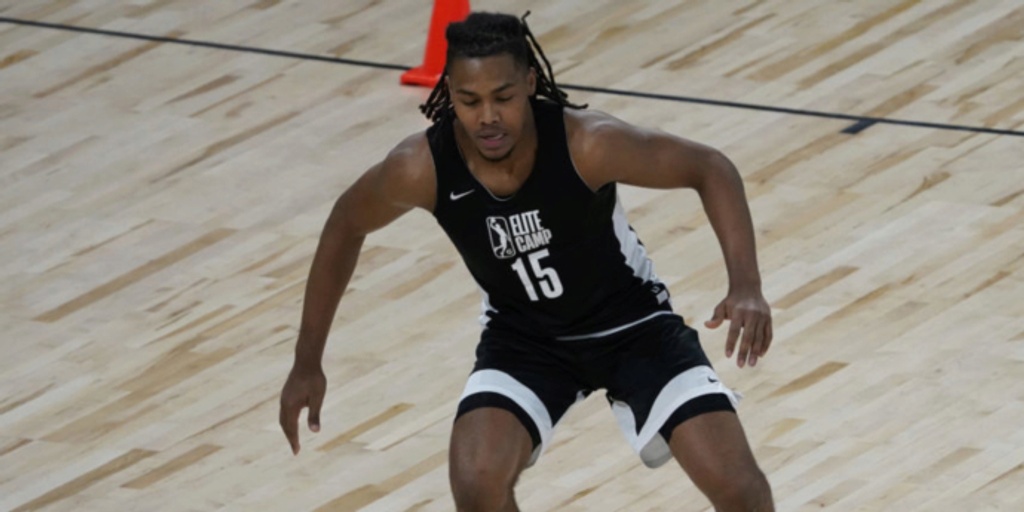 The NBA Draft is often thought about and discussed in terms of finding potential superstars. Top-10 picks and the sure-fire prospects rightfully receive the most attention from media and those who cover basketball, but each year there are a few players in the second round who are selected with a long-term outlook. These international players are filled with untapped potential, but given the right fit and organizational investment, they can become valuable assets to an NBA team.

Here are a few names that have come to NBA fruition:

The 2021 NBA Draft will be no different, with a handful of players likely to be selected as projects with the future in mind.

Hukporti is physically gifted with his tools and length at only 18 years old. In his 21 games with Nevezis, he averaged 10.4 points, 7.4 rebounds and 1.2 blocks, and showed that even though his game is still a bit raw on both ends, he has the potential to be impactful at the NBA level. Scoring in the low post has been his bread and butter for a while now, but he is actively working to improve as a shooter. He measured 6-foot, 10.75 inches without shoes and posted a 7-foot, 2.5-inch wingspan. BasketballNews.com's Lead NBA Draft Analyst, Matt Babcock, saw Hukporti live in Chicago at the NBA Draft Combine.

“Although I think Hukporti is more of a long-term project than being someone that can be expected to contribute to an NBA team right away, he is certainly not a stiff," Babcock said. "I originally thought that he would only be considered as an option for the draft-and-stash route; however, after watching him in Chicago, I wouldn’t be surprised to see a team consider selecting Hukporti and bringing him over right away. It could be advantageous to get him into an NBA strength-and-conditioning program and also on the court with NBA coaches sooner than later.”

Begarin is a tremendous athlete with good positional size at 6-foot-5 and 190 pounds. At the recent NBA G League Combine, he played well in the scrimmages, including a steal and Eurostep finish in transition. Our Matt Babcock was able to see him up close in Chicago, as well.

“Begarin has a lot of room for improvement in regards to his basketball IQ and feel for the game, but his physical tools are impressive and he seems to have a solid motor," Babcock said. "I do believe that he would be a good option to draft-and-stash.”

Still 18 years old, he is physically developed and played 33 games this season for Paris Basketball in the LNB Pro B League. He averaged 11.9 points, 3.5 rebounds and 1.4 steals, and shot 36.4% from deep; with improved feel for the game and refinement on offense, Begarin has tons of untapped upside.

Badji has incredible physical tools, and he stands 7-foot-1 with a 7-foot-8 wingspan. This length, paired with his innate rim protection instincts, makes him a menace in the paint. His offense is still extremely raw, but he excels with his back to the basket in the post, using his frame to get to the rim and finish over his opponents. Every so often, he’ll use impressive footwork and touch to score in the mid-range, as well. His long-term projection is likely as a lob target and rim protector, and he is one to watch as we approach the draft.

In 10 Eurocup games for Antwerp, Bleijenbergh averaged 9.4 points and 2.3 assists in 23.9 minutes per contest. At 6-foot-10, he is comfortable running the pick-and-roll and excels in creating open looks for his teammates as a facilitator. He plays with change of speeds and pace, and is comfortable operating with or without the ball. With his current skill set and continued development, Bleijenbergh has real potential to become a point forward in the NBA.

Makoundou is a long, rangy, athletic forward who plays with a tremendous motor on both ends of the floor. He excels scoring off movement and in transition, playing above the rim with ease. In his 30 games for Cholet this season, he has only averaged 16.4 minutes per contest, so he hasn’t had a chance to truly show what he’s capable of. But with his size and current skill set, he’s one to monitor moving forward.

Once regarded as a potential first-round pick, Sylla is a 6-foot-8 forward from Senegal who excels attacking the rim. With his 7-foot-2 wingspan, he is a strong rebounder on both ends, and plays with high activity as a cutter. Stretching the floor as a shooter has always been a concern, but he still has upside with his athleticism and physicality.

Alocen is a quick, shifty guard who is aggressive and flashy as a facilitator. He is tremendous in the pick-and-roll and has great vision, giving promise to him being a rotation-level point guard in the NBA. At 6-foot-4, he is a strong ball-handler, but questions remain regarding his shooting (27% from three in 2020-21). Due to his playmaking and ability to create for others, he remains a viable option in July’s draft.

Jokubaitis has good positional size at 6-foot-4 and195 pounds, and has shown to be an intelligent lead ball-handler. He’s comfortable in the pick-and-roll and continues to develop as a playmaker, improving as a scorer in an increased role in 2020-21. This season, he hit 38.8% of his three-point attempts, flashing the ability to score in both the mid-range and from deep. His play can be inconsistent at times, but the tools and feel for the game could make him a solid choice.