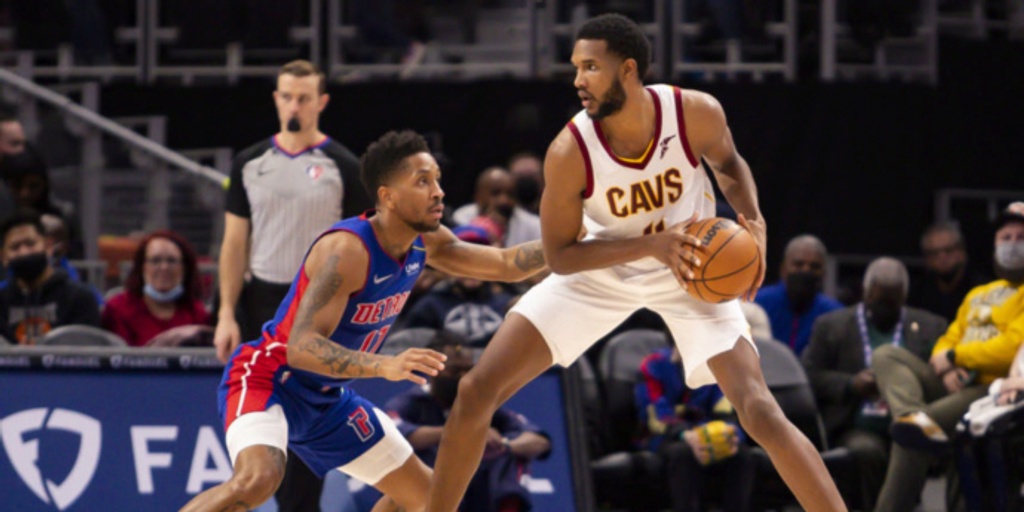 Evan Mobley has flashed brillianace in a complementary role for the third-seeded Cleveland Cavaliers as a rookie, bolstering one of the top defenses in the league. He's factored in primarily as an outlet scorer, putback machine and opportunistic bucket getter on offense. However, due to injuries, primarily one sustained by Darius Garland that's kept him out of the last four contests, Mobley has received more reps on-ball out of necessity.

Across the first 41 games of Mobley's rookie season, 68% of his baskets were assisted, according to Cleaning the Glass. Over his last five contests, just 56% have been assisted. His efficiency has dipped (55% TS to 47% TS), and while some of the drop is small-sample size, he just isn't fully capable of some of the ground he's breaking. With that said, the flashes of creation with confidence and quickness shouldn't be overlooked.

While seemingly a minor shift on paper, the breadth of self-creation has been notable on-court, but through non-traditional means.

Mobley isn't running much pick-and-roll (God, I wish he was though) and he's not isolating at a ridiculous rate. Mobley's offense is an amalgamation of wonder: stride-based drives and extension finishes, quick mid-post flurries, face-up creation off actions and some late-shot-clock wizardry.

Mobley's ground coverage has been on full display defensively throughout the year, and those same principles have shown out even more recently in the halfcourt offense.

He's not taking many shots from deep, just 1.4 per game (converting 28.6%), but his combination of length and athleticism make him a tough player to leave unguarded. Mobley's ball skills and handle are smooth for his size, and his coordination is impressive. Much in the same vein as Jaren Jackson Jr., length + athleticism + a modicum of ball skills = havoc getting downhill. It's not exactly E = mc^2, but I'm not Einstein, and it's efficacy is proven on-court!

Even then, Mobley has shown a level of coordination that JJJ didn't possess at the same stage; the ability to put together those lengthy strides and effective handles is not a simple task.

Give Mobley the space to attack off the drive, and attack he will with a quickness. Then, you're likely fouling him at the nail as you recover, or he's got an easy look in the paint. That quickness is such a key aspect. If he had a tendency to hold the ball, we're not having this conversation and I'm not writing this article, but this is Evan Mobley!

Once his shot is coming along on higher volume and without hesitancy, that will be significant for Mobley's development. But what he's shown already operating from the perimeter has impressed.

Fake DHO's have become an absolute cheat code with Mobley, forcing the defense to be weary of a drive from either him or his teammate in the action.

He may not get the finish, but the defense is collapsing, and the beauty of the Cavs is that a miss at the rim is right in their wheelhouse for another attempt.

If his defender is able to get into his hip and bump him off his spots, he can be forced into tough shots inside and outside the paint. Smaller defenders with broader frames (Saddiq Bey and Miles Bridges) have been particularly capable of forcing Mobley into less comfortable and effective looks.

Even then, the functional strength he's displayed along with his ability to draw contact (5.0 free-throw attempts per over his last five games compared to 3.3), and some of the flashes he's shown finishing through it, lead to bewildered laughs from onlookers and frustration from opponents.

He works in a great deal of mid-post looks, but not in the sense of a ball-holding, clogging-and-slogging possession as often gets surmised (the post is not a bad place!!!).

Mobley optimizes quick clear-outs and a rip-through move to use his limbs as weaponized foul magnets, or a cross-screen out of the corner into a quick face-up jumper or post-up depending on the look he draws from his defender.

Much of his post-up-oriented offense is read and react or when the ball is dumped to him for a scoring opportunity. Draw a mismatch and Mobley is quickly backing down and gunning for an instant foul.

Much like with his drive and face-up game, he can get jostled in the mid-post with good positioning and strength. He's seemingly much more comfortable going to his left out of face-up opportunities and with his footwork in general, although he's more than capable from either side. There are ways to sit down on his game and I'm interested to see how defenses approach him in the playoffs. But even then, he has counters.

While they're not fully polished, what he's showing in his bag as a rookie, especially recently, is absurd.

I mean, what are you supposed to do with this?

Fellow rookie Alperen Sengun defended Mobley fairly well throughout their most recent match-up, and it just didn't matter to an extent. (Mobley had a career-high 29 points, but the Cavs played one of their worst collective games of the season).

Mobley is shooting 38.2% on fade-aways and step-backs on 68 attempts, according to InStat Scouting. That's not a ridiculous mark, but again, the flashes are bright and the potential is brimming. Considering the majority of these shots come as last-resort, late-clock and garbage-possession attempts, it's encouraging.

His release point on his jumper is pretty close to unguardable, and as he continues to grow into his body, improve his strength and tweak his game, it's awe-inspiring to imagine what his face-up game could look like in the future. He's canning 41% of his long-range jumpers, per Cleaning the Glass, a nice 69th percentile among all bigs in the league.

There just aren't many 7-footers capable of putting together multiple dribble moves fluidly and flowing into a jumper like this.

While he may be a ways from putting it all together, that's partially what's so mesmerizing about Evan Mobley. He's playing at a borderline All-Defense level already and flashing the offensive upside and creation that created buzz about whether he should be the No. 1 overall pick in the 2021 NBA Draft. It's far too early for a redraft or to declare who should or shouldn't have been drafted where, but it's hard to debate Mobley's dominance as a rookie. As he continues to dip his toes into the developmental waters, enjoy the flashes, because, man, they are fantastic.