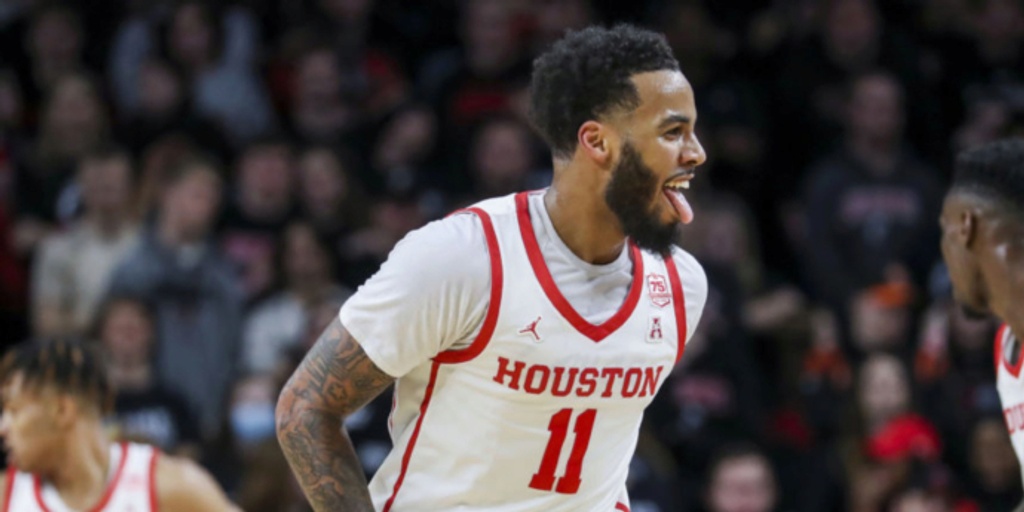 In a game where the home faithful blacked out the arena, No. 6 Houston visited Cincinnati and had their way with the Bearcats, winning 80-58. Fabian White Jr. had a tremendous game and led Houston in scoring, finishing with 22 points, 9 rebounds, 2 assists and 2 blocks. David DeJulius led all players with 25 points.

Houston (20-3, 9-0 AAC) entered this one undefeated in conference play amidst a tremendous season. They are led by Texas Tech transfer Kyler Edwards, who is shooting 38.6% and averaging 14.2 points per game. UConn transfer and senior center Josh Carlton is also playing well, and averaging 10.7 points over his last 10 contests.

The Bearcats (15-7, 5-4 AAC) are led by DeJulius, who over the last four games entering this one was scoring 16.8 points on 50% shooting from three. Junior wing Jeremiah Davenport is averaging 13.4 points and 5.0 rebounds per game.

The Cougars got started early, hitting five of their first seven shots and jumping out to a 12-3 lead. They would stretch the lead to 36-15 at the 5:30 mark and it appeared to be getting ugly. DeJulius and the Bearcats would answer over the next few minutes, ending the half on a 12-2 run.

Houston led 42-31 at the break. DeJulius led all scorers with 18 points, while White Jr. started 3 of 3 from deep and posted 15 points. Edwards had 8 points at the half.

Davenport connected on a deep triple to open the second half which got the crowd raucous again, but White would follow up with his fourth to re-extend the lead to 11 points.

The rest of the game was pretty cut and dry. Each time the Bearcats scored, the Cougars had an answer. Jamal Shead had a phenomenal second half and at times was unguardable. He finished the night with 17 points, 6 assists, 5 rebounds and 3 steals.

Taze Moore ended with 13 points, 4 assists and 3 rebounds. The Bearcats hit only 4 of 20 from behind the arc, but Jeremiah Davenport connected on 2 of his own to end with 9 points. Viktor Lakhin provided 7 points off the bench.

Houston was a -6.5 favorite entering the night and is now on a 12 game winning streak.