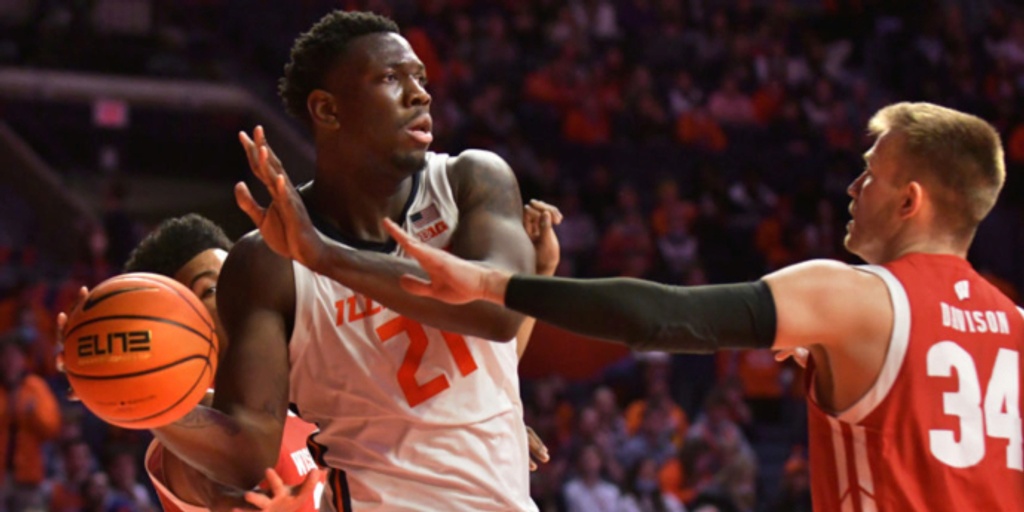 Champaign, IL  -  Kofi Cockburn had a monster game with 37 points, as No. 18 Illinois defeated No. 11 Wisconsin 80-67. The Fighting Illini got a huge conference win.

The Badgers (17-4, 8-3 B1G) are currently projected a No. 3 seed in the NCAA tournament and have been led by one of college basketball’s best stories — the emerging Johnny Davis. The sophomore guard leads the team in points, rebounds, assists and steals, and is making a case as a top-10 pick in the 2022 NBA draft.

The Fighting Illini (16-5, 9-2 B1G) control their own destiny in the Big Ten and are projected a No. 5 seed for March Madness. Junior center Kofi Cockburn, recently returned from a concussion, has helped the team get back on track after dropping games to Purdue and Maryland.

In a first half with numerous lead changes — the biggest lead either direction being only six — Illinois took a 42-38 lead into the break. Cockburn got started early and had a sensational first half with 20 points, 7 rebounds and 1 block on 10 of 12 from the field. Johnny Davis had 13 points and 9 rebounds while Wisconsin’s Tyler Wahl scored 12 points on 6 of 8 shooting.

To start the second period, four different Illinois players made a bucket in the first three minutes, extending the lead to 51-40. Alfonso Plummer connected on a triple at the 16:44 mark to end a 9-0 run, which forced the Badgers into a timeout. Lorne Bowman II and Steven Crowl would then turn it on and cut the difference back to 65-59.

From that point on, Cockburn was nearly unstoppable. He dominated the interior the rest of the way and secured the 80-67 win for Illinois. Davis had an inefficient night hitting only 5 of 19 from the field, but ended with 22 points and 15 rebounds. Wahl posted 14 points and 6 rebounds. Jacob Grandison had a solid game for Illinios with 14 points, 7 rebounds, 4 assists and 2 steals.

Illinois moves into sole first place in the B1G standings.