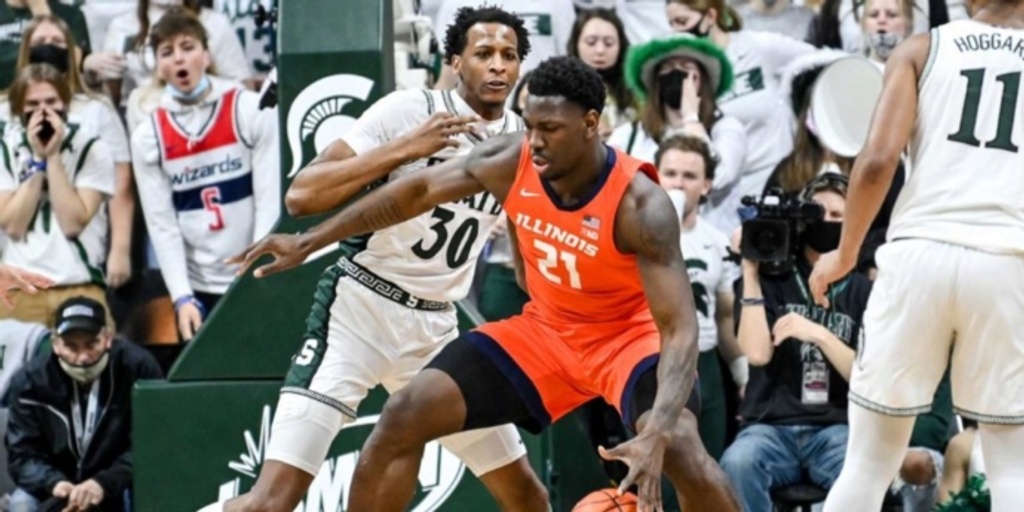 No. 12 Illinois defeated No. 19 Michigan State 79-74. llinois’ last road win in East Lansing was in February of 2015, but that changed with a big-time win today. The Illini withstood a comeback from the Spartans, as Trent Frazier hit a dagger pull-up triple with 25 seconds to play. Kofi Cockburn led all players with 27 points. Tyson Walker had a phenomenal game for Michigan State off the bench, scoring 26 points.

Illinois (19-7, 12-4 Big Ten) entered this one projected a No. 4 seed in the NCAA tournament, slipping a bit after losses to Purdue and Rutgers. Cockburn continues to be one of the most dominant forces in the country, averaging 21.4 points and 11.3 rebounds per game. Alfonso Plummer and Frazier have been reliable all season and will need to keep things up for their team during the homestretch.

The Spartans (18-8, 9-6 Big Ten) came in having lost three of their last four contests, desperately needing to get back on track. They rank 24th nationally in Adjusted Efficiency, but simply haven’t been able to score consistently recently. Gabe Brown leads the team with 12.1 points per game, but potential first round pick Max Christie will be an x-factor during the last few weeks of the season.

Illinois jumped out to a 7-2 lead after a Da’Monte Williams steal and transition bucket. Brown answered with a corner three as he scored the first five points for Sparty. The Illini stretched the lead to 17-8 as Brown picked up his second foul at the 12:00 mark and Michigan State hit only 3 of their first 14 attempts from the field.

The visitors took a 34-22 lead into the break and quickly extended it to 40-24 early in the second period. Illinois remained in control for a good while until Tyson Walker and AJ Hoggard cut it down to 67-59. Walker then connected on a three at the 3:47 mark while, at the same time, a whistle under the basket sent Julius Marble II to the free-throw line. Cockburn was then called for a 3-second violation and the momentum completely shifted, revving the crowd up again.

Cockburn and Walker traded buckets as Illinois held a 71-69 lead with 1:57 to go. Frazier stole the ball with 1:02 to go and finished a tough transition layup. Walker converted an and-1 to make it 76-74 with 47.7 on the clock. Frazier hit a deep pull-up triple with 0:25 on the clock, which all but ended the game, as Illinois would get the ball back and run out the clock.

Jacob Grandison scored 24 points on 6 of 10 from behind the arc. Frazier finished with 12 points, 5 assists and 3 rebounds. Joey Hauser posted 11 points for the Spartans. Hoggard finished with 15 points and 8 assists in a strong outing.

Tom Izzo remains one win from tying Bob Knight for the most overall wins at B1G schools, at 662.