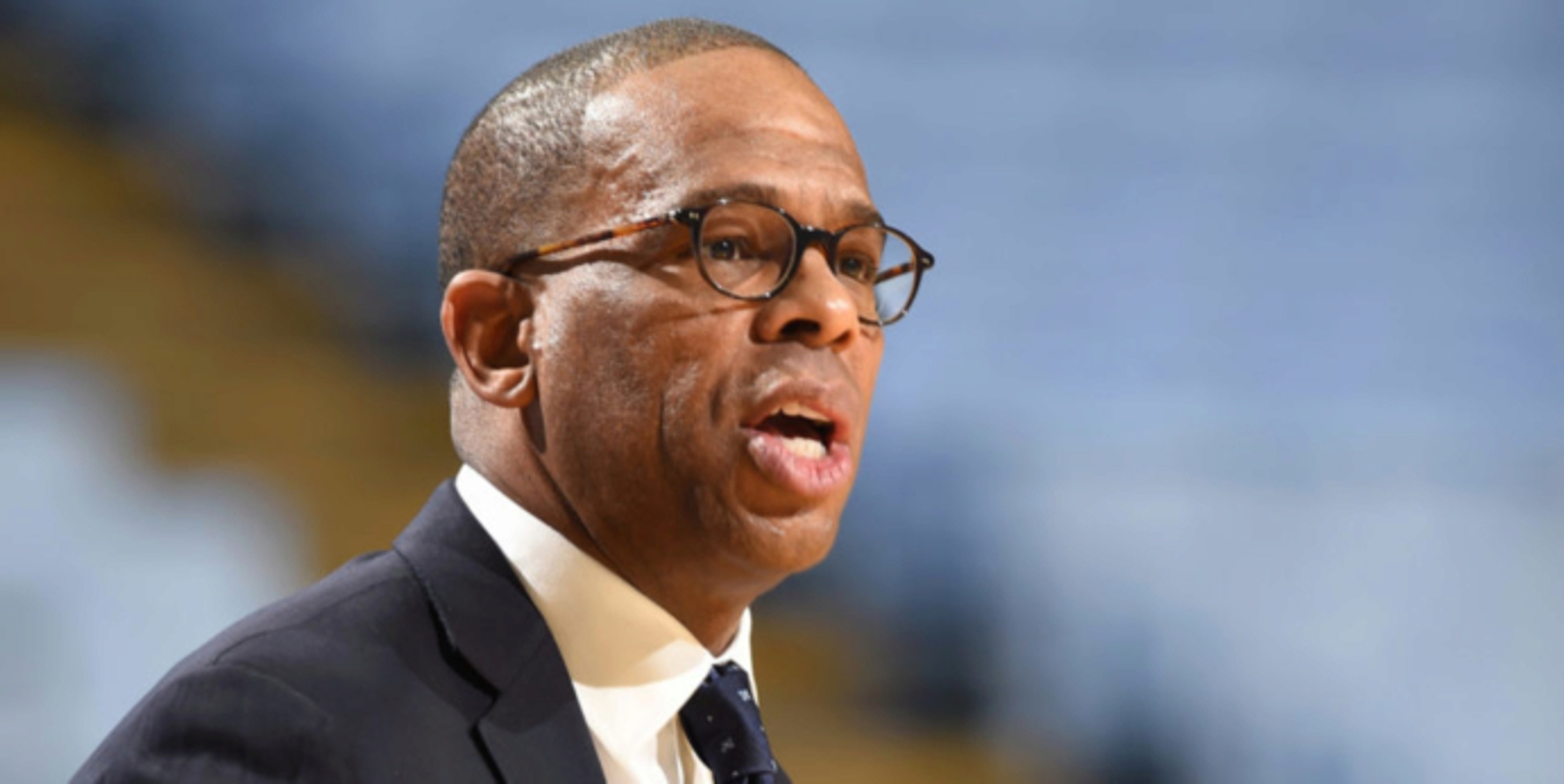 Two days ago, my former teammate with the Washington Wizards, Hubert Davis, was introduced as the new head men’s basketball coach at the University of North Carolina.

Hubert will succeed the legendary Roy Williams to become the Tarheels' first-ever Black head coach for the men’s basketball team -- an amazing accomplishment in and of itself.

Anyone who knows Hubert knows he’s one of the nicest guys on earth. His goofy laugh, huge smile and kind heart are some of the most memorable traits I remember from our playing days. However, he raised quite a few eyebrows with a statement he made to a group of reporters Tuesday at his introductory press conference.

“I’m proud to have a white wife," Hubert said.

I know what you’re thinking: that had to be taken out of context. Well, here is the full quote and context of the statement that has since then gone viral.

On my radio show in Washington D.C. with Dave Zirin, "The Collision: Sports And Politics," our guest this morning was Kevin Powell, a writer, civil and human rights activist, poet, journalist, public speaker, filmmaker and television personality from the MTV hit reality show “The Real World." We discussed my former teammate’s comments in-depth. Here is a transcript of our conversation:

Dave Zirin: It's great to have you on the show, [Kevin]. So much we want to talk to you about. We might as well just jump right in since we just heard [the audio of the comment]. I mean, what was that? It was a very antiseptic, boring kind of press conference introducing Hubert Davis. No one was paying too much attention to it. And then he said, "I'm proud my wife is white," which is not something you normally hear at a basketball press conference. It just raised some eyebrows. What was your reaction when you heard that, Kevin?

Kevin Powell: I said to myself, "This is how racism works in this country, where a Black man..." Let me double back for a second. I don't have an issue with people being in interracial marriages, interracial relationships. I have people in my family who are. I have people who I love who are. I have friends who are biracial, multicultural. The issue is when we feel as Black people, as people of color, that we somehow have to make white people comfortable by letting them know that we're not too Black. "And therefore, let me mention the fact that I have a white wife and I have biracial children." That's what I heard from it. It was almost like he was apologizing for being Black, apologizing for the horrible racism that feeds that statistic that only 26% of NCAA coaches are Black males.

It didn't even fit. It didn't make any sense, which is why you see the uproar all over social media. Why are you being an apologist for racism? Just because you're married to a white sister does not mean that racism doesn't exist. And it's North Carolina, it's the United States of America. George Floyd trials [are] going on. We just celebrated, sadly, one year of Breonna Taylor being killed. This is the climate of the country. And sadly, we have a lot of people who still don't want to have [that conversation]...Just tell the truth, just speak the truth. I mean, Harry Belafonte is married to a white sister. We can go through a list of brothers who have been progressive, revolutionary, radical, and they didn't apologize for their Blackness. They just happen to be married to a white sister. You don't have to do that. It's shameful to me. I just thought of slavery when I heard that, and the seriousness about it.

Etan Thomas: It's interesting because I played with Hubert Davis. I played with him for two years. One year with the Washington Wizards, and [the other] when I was drafted to the Mavericks. He was on the team with Dallas; I played with him there. I know him, and my wife knows his wife. We know each other. You start to know each other as family. I don't think he meant it, the way that it sounded. I could be giving him too much credit, but I don't think he meant it that way. But what it seemed like he was doing was playing into that old narrative that when a Black man reaches a certain level of success, that what comes along with that is that he has a white woman on his arm. And just the fact that he said he was proud that his wife is white -- that was his actual phrasing, those were his words -- I just have to believe that he didn't mean it that way. That's what I'm going with. I don't think he meant it that way. But the way it came across -- without me knowing him personally, without me having played with him -- I mean, it definitely raised quite a few eyebrows.

Powell: The thing that I think about is when you get to that level, it's not like you haven't had opportunities to speak in public or speak privately. You've had plenty of opportunities to practice. I always say to people when we're talking about race and racism in this country, you have to read the temperature of the room. Again, I don't care who people are married to. I don't care who people date. Love is love is love is love, like [creator of Hamilton] Lin-Manuel Miranda said. But what I do care about is when something comes across as if you're apologizing for racism, and that's what it felt like to me. It sounds like you felt the need to let people know that you're a "safe" Black person. You're not one of those dangerous Black people, "because look, I got a white wife and I got biracial kids." That's the way it came across. And that's actually really dangerous to me,  when people do that.

Thomas: Yeah...even the way that he first changed the phrasing of the question. If you hear the actual reporter that asked him, he said that, "You being North Carolina's first Black head coach." And he said, "Well, I'm proud to be African-American." I mean, it might be something subtle, but changing the phrasing in itself, when you're listening to it, you're like, uh-oh, where's this going? That's what I thought once I started hearing it. Because like you said, Dave, all before that it was just a regular, boring press conference.

Zirin: I want to ask Kevin if he agrees with something my wife said about it. Always a little dangerous, but Kevin, you do not have to agree with what my wife, Michelle, said about this. Little pressure, but Michelle, she teaches in DCPS. She associate-teaches majority students of color or Black students. And she said to me that when you do this, you have to be conscious of impact. It can't just be your intent. "Oh, Hubert Davis didn't intend to do that." You need to take accountability and ownership of the impact that your words have. That's more important than what your intent was, especially in 2021. What do you think about that, KP?

...You two know this. You gentlemen are brilliant and articulate, and you have this great platform. You know what you put out there, [and] you can't take it back because it becomes a permanent record. I'm not saying we should censor ourselves, but I think we should give a lot of thought to: "How is this going to fall with people?" Particularly, if I'm trying to get certain messages across. If the message is that we're all in this together, part of the human family, the human race, I support that. I support that in so many different ways. I support that as an activist, I support that as a Christian. But if the message is "Racism is not as bad as it was, because look at me. I've got a white wife, and I'm a Black coach at UNC," which is what people are looking at...that's the meme that's going out there.

What is wrong with him? It's almost just what Jay Z is saying in that song from [his] "4:44" album: "I'm not black, I'm OJ." That's what it comes across as with Hubert Davis' words, at least to me and the millions of people that are responding to it. I just think you put an unintentional spotlight on yourself when you don't think about your words, and you feel like you have to say these things. I felt like it wasn't just something that was on the cover. I think he really feels this based on his experiences, and I think that's even problematic. How has this man navigated race and racism all these years? What kind of conversations do he and his wife even have? Because the thing that I admire about folks that I know who are Black and white and married in this country, is that they have talked about having very difficult, uncomfortable, necessary conversations about race and racism. Just because you're married doesn't mean our individual choice has eliminated systemic racism. It has not.

I understand Kevin Powell’s point, just as I understood the perspective of Temple University professor and host of BET News, Marc Lamont Hill, who also addressed the subject on his show "Black News Tonight."

Maybe I’m just trying to take up for my former teammate, but I do really believe that he didn’t mean it the way it came across. It may be a good idea for Hubert to do a follow-up interview to further explain himself. We're seeing all of the people across social media rip him to shreds these past two days, at a time when everyone should be celebrating him getting the new head coaching job at his alma mater and making history as the first Black head basketball coach in North Carolina.

Words are important. Timing is important. Clarity is important. And if Hubert Davis didn’t mean it the way it sounded to so many people, it may be a good idea to address it, so he can start off this new adventure on a good note.