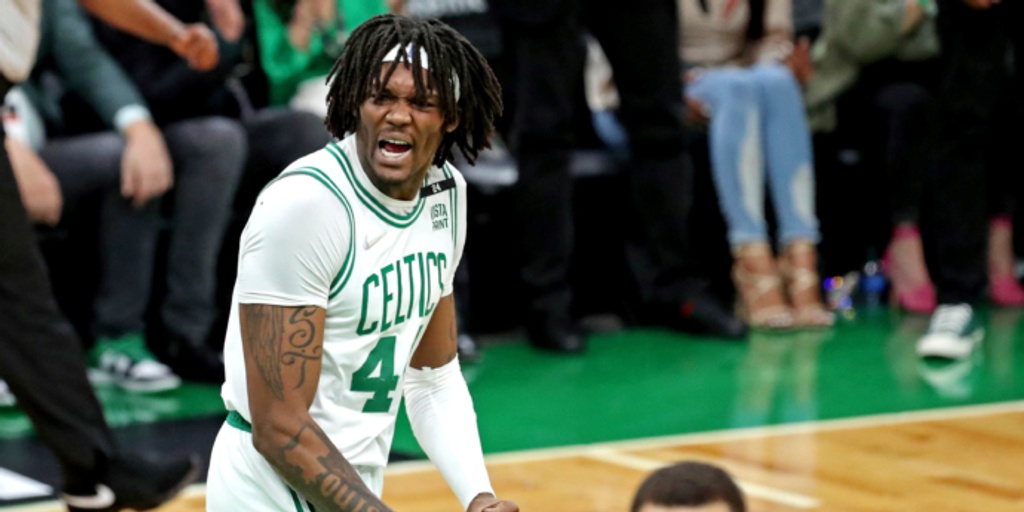 Shams Charania of The Athletic released his latest NBA trade slop drop Monday morning, and it restated several points on the Boston Celtics' involvement in the Kevin Durant sweepstakes. Notably, according to Charania, Boston has not made Marcus Smart or Robert Williams III available.

Smart is entrenched in the Celtics franchise as its longest-tenured player, emotional leader and reigning Defensive Player of the Year. But the withholding of Williams also speaks to how highly regarded he is on the roster and how critical he was to Boston's NBA Finals run last season.

Williams broke out big time in 2021-22, averaging 10.0 points, 9.6 rebounds and 2.2 blocks per game with a stunning 73.6% clip from the floor. He landed on the All-Defensive Second Team and anchored one of the best defenses in the league. A year ago this Wednesday, Williams signed a four-year contract that could be worth up to $54 million. He's already made that look like a massive bargain.

The 2018 first-round pick thrives in his classically-defined archetype as a rim-protecting center, two-way rebounder and lob finisher. Williams has already showcased elite traits in that role — traits that, if he never improved even fractionally, would still be among the best in the world for the next several years.

However, Williams' role also clouds viewers' visualizations of his next steps. At age 24, and, with one healthy-ish season under his belt, Williams still has plenty of room to grow with the Celtics. But if he's already so good at what he does, and Boston rarely asks him to do anything else, what is the trajectory for his impact?

Fortunately, between Williams' additional skills and his functional areas of improvement, he can continue to shoulder more responsibility as a young big man.

Celtics fans have continuously marveled over Williams' passing flashes during his first few seasons in the league. His assist-to-usage rate has been in the top 20% among centers in each of the past three years, per Cleaning the Glass. And, despite receiving few touches outside of play-finishing chances, Williams can dazzle with his vision.

I love watching Robert Williams pass the basketball. Always makes such rapid decisions for the Celtics. These are two assists from today, the one-handed midair redirect to Pritchard after the rebound is silly pic.twitter.com/bWf4V9Rf3a

When Boston tapped into Williams as a passer, they often set him up at the top of the arc or slightly offset on the wings. It's amazing how imposing he is from that range despite posing zero threat as a shooter or driver. Having Williams quarterback the offense from here also opens up opportunities for Jayson Tatum and Jaylen Brown to move off the ball and use their strength and speed to get open instead of ball-handling and creating.

It's almost like Tatum is running a wide receiver option route in the above clips. In the first two plays, Jayson is slipping screens and cutting to the basket while Williams rifles passes in for layups. In the third clip, Tatum is using a Payton Pritchard flare screen and hitting a three. The fourth clip is another flare screen, but Williams and Tatum both recognize the open space, and the former leads the superstar into a driving layup. For good measure, the last clip is Brown faking off a similar pindown and cutting to the basket.

With "Timelord" running the show, off-ball defenders have to key in on Boston's dynamic duo, and it opens up easy reads for him to make, like this one to Grant Williams:

Letting Robert Williams direct from the arc is a great way for the Celtics to leverage Jayson Tatum off-ball. He drew three Bucks defenders with his cut and that created an open three for Grant Williams pic.twitter.com/Mw3K2qqorL

The gripe here isn't with Williams III; rather, I wish the Celtics would put him in these positions more often. He has a high overall turnover rate, but rarely gives the ball away in these situations. It places less of a load on Tatum and Brown as self-creators and gets more players moving around the half-court in general.

There's also untapped intrigue with him at the high post. According to PBP Stats, Williams III had 84 elbow touches across the entire 2021-22 regular season. His 16.7% assist rate ranked second among the 99 players with at least 75 elbow touches, behind only Memphis Grizzlies big man Steven Adams. Now, some of these touches are mere handoffs. But others are Williams connecting with shooters on a short roll, or directing traffic out of a post touch.

Jared Weiss of The Athletic detailed how Boston's offense drifted away from post-ups as the season went on, and how adding more back with Williams involved could make sense. Given Williams' vision and the success that comes when players orbit around him, I would agree.

Any individual scoring development like a mid-range jump shot would be icing on the cake, as Trevor Hass of Celtics Blog wrote. But head coach Ime Udoka already has untapped potential right in front of him in the form of Williams as a passing hub. Manifesting more touches for a tertiary option is much easier said than done, but integrating Williams further could seriously juice a Celtics offense that often stagnated.

Defensively, however, the onus is on Williams to improve his switchability.

The 6-foot-9-inch center is a remarkable roamer and shot-blocker — in the highest echelon of rim-warping players across the league. He hit his defensive stride strongly down the stretch because Udoka and the coaching staff put him in defensive positions to be successful. Sporting News writer Stephen Noh intricately broke down how the Celtics kept Williams out of the on-ball limelight whenever possible and made his job all about rotating and swatting.

That's great, and it proved to be successful enough to get Boston to within two games of a championship. It also required some luck and some heavy lifting from Al Horford, who used a stretch of good health to play some of the best switching defense we saw all season at age 35.

Horford, now 36, can't be expected to carry the same burden throughout another title push, and the Celtics only have one other center in line for possible rotation minutes in Luke Kornet. Williams will have to defend in ball-screen coverage and switch onto guards at certain points.

Last year, it didn't go so well. Boston started out switching 1-through-5 on defense and changed that as the year went on. Who knows if it was Williams who caused the shift, but his struggles certainly played a part.

As shown in the clip above, Williams can't move with the necessary lateral quickness to stop drives at the root. He has to rely on his length to catch up when he gets beat, and while that leads to some highlight-reel recovery blocks, it's not a fail-safe he should want to lean on. Williams is also historically a foul-prone perimeter player who bites on pump-fakes far too often, though he tempered those temptations last year.

I'd claim that Williams improved in the moments he did have to switch onto isolations later in the season. It seemed he played those possessions more conservatively and was willing to give up the three-ball, knowing he has the vertical pop to reach shots like this:

Don't expect Williams to become some unicorn-like defender who can smother players all over the court. If Williams can at least contain drives and keep defenders thinking about the threat of a block, that's a win for Boston. He's got the all-world rim-protection in his pocket already.

Williams is already a high-end starting center whose talents can help Boston get back to the Finals. If he breezes through a heavier passing workload and makes some progress as an on-ball defender, we could be talking about a sub-All-Star type of center next season.

Robert Williams III only underscores that the Celtics, even after reaching June, still have room for progress.