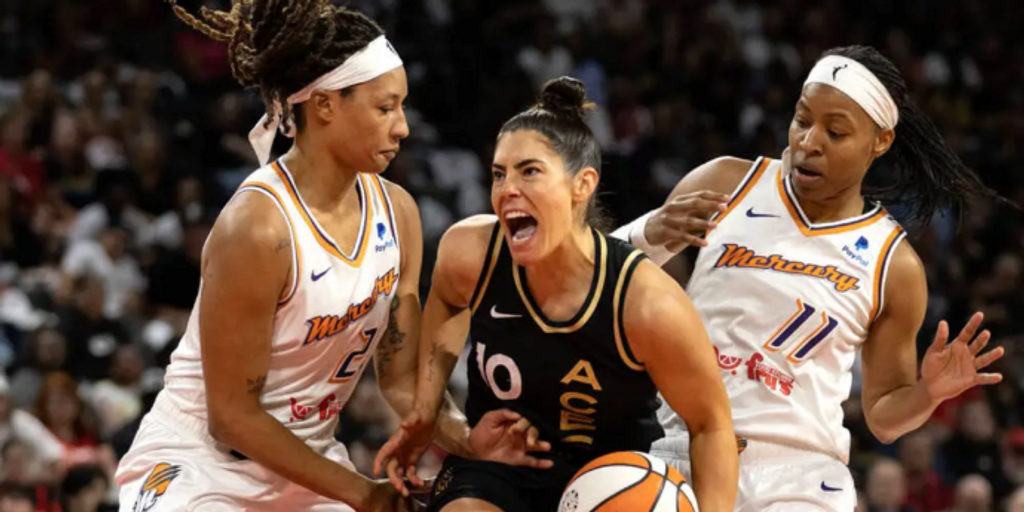 Why the WNBA should change their playoff format... again

I feel bad for the Phoenix Mercury.

They're fresh off a season-ending blowout loss to the Las Vegas Aces. The 37-point beatdown included multiple playoff records being broken by the Aces — most consecutive made field goals to start a game (10), most threes made in an opening quarter (8) and the most made threes in a game (23) for starters.

Beyond that, it was an uncerimonious end to a so-difficult-it's-hard-to-fathom year for the Mercury. The detainment of Brittney Griner cast a dark cloud over the organization, and rightfully so. Everyone wants Griner home as soon as possible. To follow that case while trying to play basketball was a difficult duality to work through.

On top of that, there was the implementation of a new head coach in Vanessa Nygaard, some turmoil between said coach and her best player, Diana Taurasi's up-and-down season (and as she found her stride, she suffered a season-ending quad injury because, of course), Tina Charles' departure and a boatload of injuries (and absences) suffered throughout the roster... I don't know how they made it through. The Mercury should be commended for their strength this season.

It would've been nice to see them get a home send-off at the very least. But because of the current playoff format, that simply didn't happen.

The WNBA just shifted to a best-of-three first round after having single-elimination games to kick off the postseason in years prior. Going to a series-based first round was a step in the right direction; selfishly, I'd love to see more done. For example, give us best of three in the first round, best of five in the second round and best-of-seven in the Finals. There are scheduling woes that people smarter than me have much more of a handle on, but a man can dream.

I will say, though: If a best of three is what we have to work with in the first round, the home/road split should be handled differently.

As of now, the higher seed gets to defend homecourt for the first two games. The win-or-go-home Game 3 is played on the lower seed's floor.

I understand why that setup exists; it's a way to reward the higher seeds for their regular-season play, and incentivizes the league overall to push for the best record possible. There's a "take care of your business" element to giving the higher seed the first two games. If they lose one of the first two games, as the thinking goes, they have nobody to blame but themselves for having to close things out on the road.

While that line of thinking is fair, I'm not sure how much business sense it makes. It's hard to ignore that part, since The W is still very much in growth mode.

Within that lens, I'm not sure why the league has agreed to a format that includes the possibility of a team not getting a home game — which means not getting the revenue that comes along with hosting a home playoff game.

The NBA comparison isn't 1-to-1 for a multitude of reasons, but being able to host home playoff games (and the money that comes with that) is part of the calculus for lower-seeded teams making playoff pushes instead of taking the step back and playing for better lottery odds.

Frankly, I'd be asking some semblance of "What was this season for?" if I'm (a fan of) the Mercury. This season was filled with hardships. The three best players on the roster weren't available. You drew the best team in the league, and you didn't even get to bring things home. There was no young, blue-chip prospect getting valuable playoff reps (which could've been the case for, say, the Atlanta Dream if they held on). What was gained here?

X-Factor, we gave you everything we had. Thank you for supporting us every step of the way. We love you 💜 pic.twitter.com/DzL3WBx922

The Mercury example won't happen every year — dear God, we hope not — but it's a loud example of the flaws of this current system. Ideally, the best of three would follow a 1-1-1 game format, with the higher seed getting to host Game 1 and Game 3. I'd wager that isn't the case right now due to the lack of charter flights across the league.

(That really needs to be settled by the way. There's no reason we should be having flight threads and flight rants from WNBA players in 2022. There are owners willing to pay for the flights. If cheap/broke owners don't want to oblige, they're in the wrong darn business.)

While flights remain an issue, the obvious compromise is to flip the current format. Give the lower seed the first game, then the higher seed gets Game 2 and Game 3 to close things out. It's counterintuitive on the surface, but it's a way to guarantee a home game (and revenue) for both sides without giving away a competitive advantage for the higher seed.

Think about how pressure-packed a Game 1 would be for the lower-seeded team. This is the chance for them to land a punch en route to a potential upset. The stakes would be high, which should also set the stage for incredible playoff atmospheres.

The Mercury have long had one of the best (playoff) crowds in the league; Could you imagine what Game 1 of this series would've been like once you factor in how much this team has gone through this year? It would've been one for the books, regardless of how the actual game would've gone.

We shouldn't rob teams (and their fans) of that opportunity. Again, a 1-1-1 setup is the most ideal. If The W and their owners can come to some sort of agreement around charter flights, that should be the move.

Absent of that happening, though, a 1-2 setup makes more sense than the 2-1 setup we currently have.