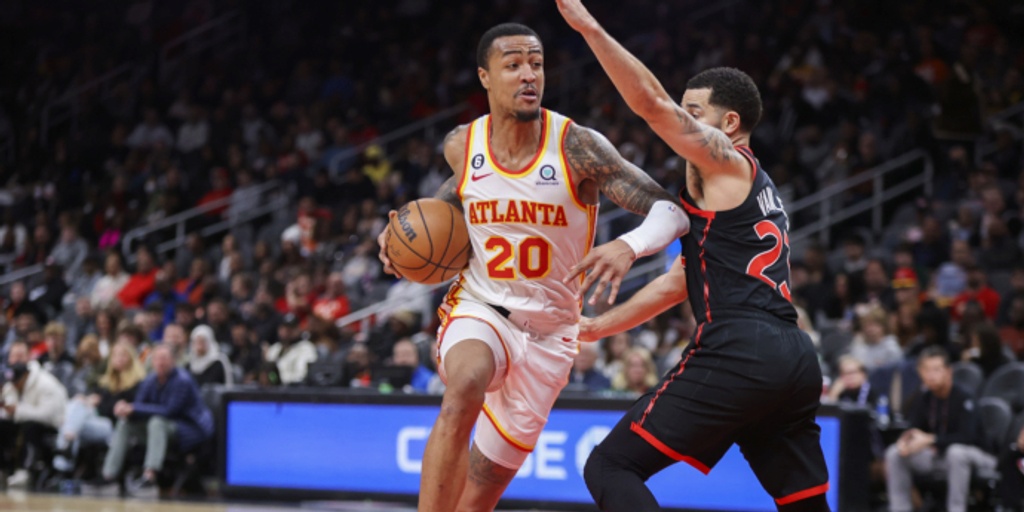 It feels like trade rumor season doesn't begin until John Collins' name is brought up.

Over the weekend, The Athletic's Shams Charania reported that the Atlanta Hawks "opened preliminary trade discussions" involving the talented forward, while listing the Phoenix Suns as a team with some level of interest.

Jake Fischer of Yahoo Sports added more Wednesday, citing the Utah Jazz as a team that would covet Collins on their roster. From Fischer:

The Jazz’s interest in Hawks forward John Collins is real, league sources said, and would seem to indicate Utah is considering how to add to this winning unit rather than subtract from it. Right now, the likelihood of Collins landing in Salt Lake City, though, seems low. Atlanta approached the Jazz about swapping Collins for Markkanen, sources said, which did not generate any traction.

It's easy to see why the Hawks would want Lauri Markkanen. Markkanen is scorching the nets this season, averaging a career-high 22.3 points (64.2% on twos, 36.1% on 5.7 threes per game). He isn't just a better shooter than Collins, but he's also a more willing shooter — on top of being able to get shots from different platforms. Pick-and-pops, spot-ups, off-ball relocations and movement triples coming after screens are all in Markkanen's bag.

Considering Markkanen can also get his own — 56.7% of his twos and 74.4% of his threes are assisted on, compared to 67.2/85.7 for Collins — he could take some of the creation burden off of Trae Young and Dejounte Murray.

It's a little more difficult to parse out Utah's interest, even if the likelihood of a move doesn't seem high right now.

The Jazz are off to a 12-7 start behind the NBA's fourth-best offense. A move for Collins would be aiding a strength, particularly his ability to bend defenses with his rolling (and slipping) in ball-screens. Assuming the jumper bounces back — he's canning only 26.9% of his threes this year after draining nearly 39% of them across the last three seasons — Collins would be a valuable screening partner for their ball-screen-heavy guards.

I'm not sure how much Collins would solve Utah's solid-but-sliding defense. He's a better mover and weak-side rim protector than Kelly Olynyk, for example, but even the most optimistic view of him as a defender overall is neutral right now. You could argue the Jazz would have more room to ramp up their pressure in ball-screens; Olynyk has mostly operated in a drop to less-than-stellar results, whereas Collins may be more comfortable operating at the level.

If a deal were to come to fruition, it seems likely that Olynyk would be the big piece coming back to Atlanta. His spacing and secondary (and honestly, random) playmaking in the half-court would open up avenues for the Hawks.

(Secondly, it's worth keeping an eye on the Hawks' tax situation. Swapping out Collins' long-term money for the expiring deal of Olynyk may be more valuable than the Hawks' fan base would like.)

Figuring out the rest of the deal is the fun part. As Fischer wrote in his piece, Mike Conley's salary could get them there, but two questions immediately pop up.

1) Do the Hawks need another point guard, even one who's played as well as Conley has before the injury?

2) Would the Jazz even have interest in moving Conley in a deal like this? He's still their most reliable creator out of ball-screens. You can talk yourself into a Conley-Collins two-man game down the stretch; Sexton-Collins might look different, at least early on.

The answer may be Malik Beasley, a sharpshooter (38.8% from three on 7.0 attempts over the past four seasons) whose deal could come off the books this summer ($16.5 million team option for next season). The deal could also expand to include Rudy Gay ($6.5 million player option for next year) and Justin Holiday (expiring) swapping places as a "we're taking on the Collins money" tax from the Jazz.

I think there's further conversation to be had between the two sides, even if I didn't have the initial conversation on my bingo card.