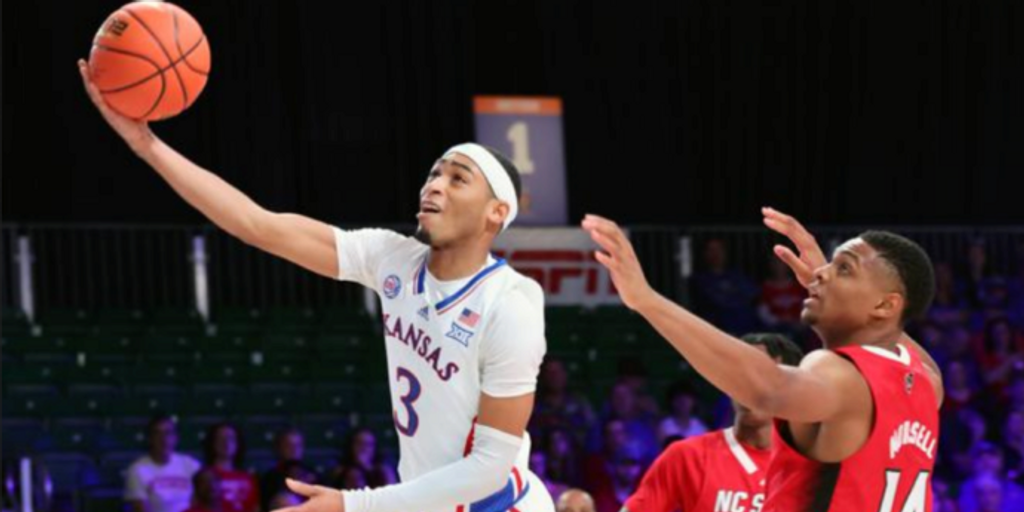 Dick had 18 on six 3-pointers in the first half before going 1 for 8 from the field after halftime. Jalen Wilson added 19 points and 11 rebounds for the reigning national champion Jayhawks (5-0), who blew an eight-point halftime lead and a nine-point second-half lead before grinding it out in the final minutes.

N.C. State played a fast pace, picked up full court and stayed within arm’s reach of Kansas the entire way but couldn’t take a second-half lead even after tying it five times, the last coming at 63-all on Jack Clark’s jumper with 7:14 left.

Kansas had imposed the suspension on Self and assistant Kurtis Townsend as part of the fallout from a pending NCAA infractions case tied to the federal investigation into corruption within the sport.

Self was allowed to coach practices, so he remained involved with the team up until gameday. The rest of the time, he said, he got a dose of the helpless perspective of a fan while assistant Norm Roberts led the team. He said he couldn’t even take notes until he watched the game on a replay.

As he emerged from the tunnel Wednesday, he was greeted with loud cheers from a boisterous Kansas fan section. He had a slight smile as one fan dangled a Jayhawks national championship banner as he walked by and gave several fans a line of high-fives as he headed to the court.

But Dick quickly took the spotlight with a barrage of outside shots. He went 6 for 9 from behind the arc in the opening 20 minutes, the last seeing him knock down one through light contact from Morsell and fall to the floor just before the halftime horn.

Dick got up with an emphatic shout and clapping, while Morsell could only respond with a frustrated shrug as Kansas took a 39-31 lead into the break.

N.C. State: This was N.C. State’s first appearance at Atlantis since 2017 at the start of Kevin Keatts’ coaching tenure. That Wolfpack team opened that tournament with a stunning upset of No. 2 Arizona and this year’s bunch flirted with another while giving Kansas fits all the way to the final minutes.

Kansas: The 6-foot-8 Dick is off to a strong start. He came in averaging 16.8 points while shooting 10 of 20 from 3-point range, then surpassed his (short) season high of 23 points from the opener against Omaha.

N.C. State: The Wolfpack will face the Wisconsin-Dayton loser in Thursday’s consolation bracket.

Kansas: The Jayhawks advanced to Thursday’s semifinals to face the Wisconsin-Dayton winner.