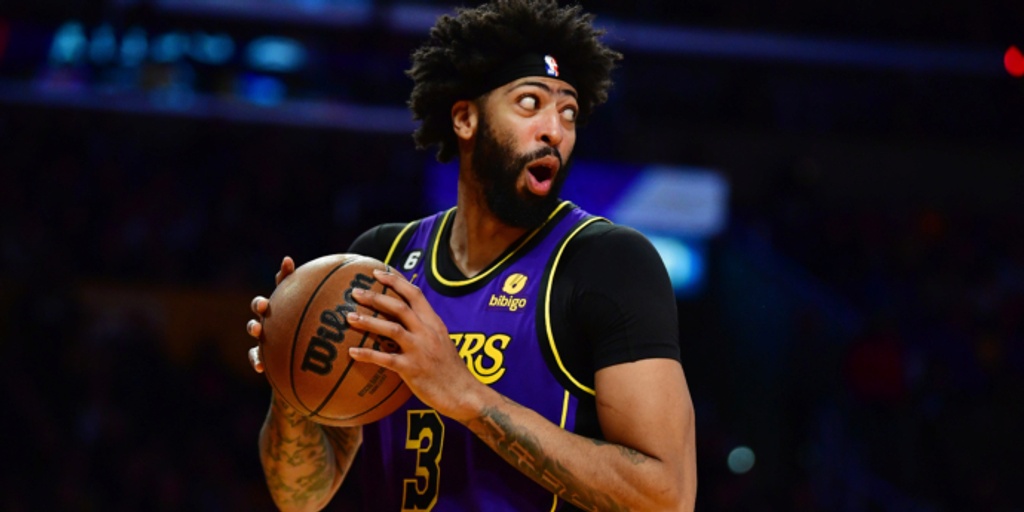 With Anthony Davis owning the paint again, keep your eye on the Lakers

It's probably disingenuous to say we're witnessing a new Anthony Davis as of late.

We've seen him dominate games as a solo act. We've seen him throw opposing game plans out of the window with his two-way prowess alongside a co-star. He's settled into being a darn-good No. 2 alongside an elite primary, with that setup peaking during the Los Angeles Lakers' 2020 title campaign.

But it probably isn't right to say the old Davis is back, either. This version feels like a hybrid: The athletic marvel of old with a slight shift in mindset. However you want to describe him, just make sure you note how ridiculous he's been.

I've been wildly impressed with Davis' process. This hasn't just been a hot streak of jump shooting (though having the jumper going helps; he's drained 53.3% of his mid-range attempts during this four-game stretch).

There's been a real emphasis for him to get in the paint. He's been able to isolate against slower defenders, get them off-balance and get downhill. There's been a comfort against smaller players, slow-playing things before tossing his body around. Even in ball-screens, AD's rolling more; he's rolled on nearly 69% of his screens during this four-game stretch, up from 60% before it, per Second Spectrum.

No matter the opponent or the method, the results are the same: High-value shots, shooting fouls drawn or both.

What's really popped for me has been the work Davis has done after the catch. Too often in the past, Davis would receive a cross-screen to set up a post touch, only to receive the ball 15 feet (or further) from the basket after being knocked off his spot. He could still attack from there, but it would be a steeper climb. Davis would compound things by settling, catching and holding before firing a rhythm-busting jumper.

We haven't seen that play out too often as of late. Even when he's pushed out, he works to get both feet in the paint. This really popped in the Brooklyn game on Saturday.

On the season, the average shot distance for Davis is 6.5 feet. That's easily a career low, besting his rookie campaign (7.8 feet) where he attempted six threes the entire season.

It would be easy to attribute the lower shot distance to Davis practically taking threes out of his diet this season; only 7.1% of his shot attempts have come from beyond the arc, his first time dipping below 10% since the 2016-17 season. But even his average two-point shot distance is down, from 7.8 feet last season to 6 feet this season per PBP Stats.

Davis has been phenomenal on the other end, too. The Lakers have had him toggle between a deeper drop and having him up to the level of the screen when defending pick-and-rolls. No matter the task, Davis has proven to be game.

When in a drop, Davis has been able to walk the line between disrupting the ball-handler's space and not letting the roller get behind him. When he's at the level, he uses his length to hinder potential passing lanes, but is still quick enough (and a good enough leaper) to prevent lobs from being thrown over him.

(Of course, it's worth noting the Lakers have been on a string in general. Drop coverage doesn't work without good screen navigation, or timely help when those point-of-attack defenders get screened off. When everyone is doing their job, the whole of it flows more smoothly.)

Opponents have generated just 0.8 points per possession (PPP) when running a ball screen at Davis over the last four games, an elite number that isn't far off his season-wide mark (0.85 PPP). Zooming out, opposing teams see their rim rate — the percentage of shots coming at the rim — drop by 3.6 percentage points with Davis on the floor, a mark that ranks in the 86th percentile, per Cleaning The Glass.

And when players do try Davis at the rim, it doesn't generally go well. They're converting a shade under 54% of their shots at the rim against Davis over the past four games, a mark that would rank sixth among high-volume rim protectors (min. 5.0 rim shots defended per game) across the entire season.

Davis won't be a 35-and-18 guy moving forward; that's MyCareer stuff you shouldn't reasonably expect. But if this is the mindset from Davis — getting to the rim and free-throw line at will, patrolling the paint with gusto — the calculus could change for the Lakers. They're slated to get LeBron James back on Friday; I don't need to explain how much he may help their offense.