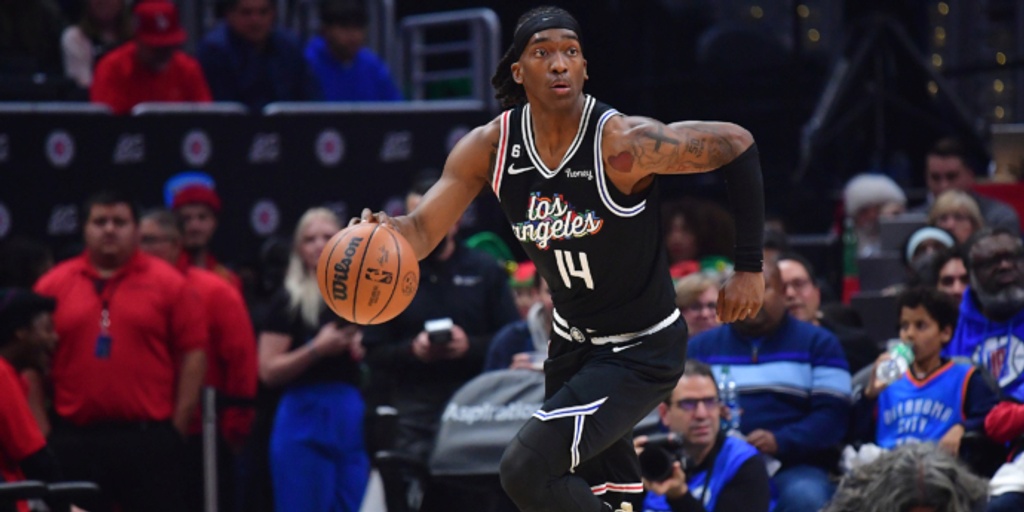 With the Clippers searching for direction, where should they turn?

With 6:45 left in the first quarter, Terance Mann brings the ball up the right side of the floor.

Kawhi Leonard (yeah, he's playing) attempts to set a flat screen on Tobias Harris to help pry Mann open, but mostly whiffs on the pick. Mann finds himself in the right corner, staring down Harris as the clock ticks.

Ivica Zubac steps up to set a screen this time, this time to Mann's left. With the right side emptied, Mann could run Harris off a bruising screen and force Joel Embiid to defend the 2-on-1 with minimal help.

Instead, Mann rejects the screen and continues driving to his right. He's able to get two feet in the paint, Nashing around while drawing the attention of Embiid and (a trailing) Harris. That opens up a window for a dump-off pass to Zubac, leading to two points.

It's a simple possession that takes half the shot clock to complete. It features three things we haven't seen enough of from the Los Angeles Clippers this season: Kawhi as a screener, a paint touch from a guard and easy, efficient offense being created.

The Clippers have been disjointed all season long. Their 23-23 record and minus-0.7 net rating screams "mid," not "sure-fire title contender." There's obvious bail to shoot; of the 46 games the Clippers have played, their best three players — Kawhi, Paul George and Zubac — have only appeared in 15 games together. Even with that, the Clippers have barely won those minutes — plus-14 (+2.6 NET) in 260 minutes.

That's probably the most concerning portion of this Clippers season for me. It's one thing to be searching for continuity; everyone was already banking in maintenance days for Kawhi, specifically. I am not here to argue about the merits of that; do it on your timeline, if you must.

But it's another thing to be searching for answers. It's felt more like the latter from the Clippers this year. That's baked into some of the lineup choices of course, but you've also seen it with the roles on the roster.

No player speaks to this dynamic quite like Mann. His rise in the rotation has been a joy to watch. From energy piece, to connector, to "Hey, he's kinda baking Rudy Gobert right now" to connector-plus-defensive-stopper to... point guard? To point guard!

Mann has done a solid job of mixing in his snappy nature with more on-ball patience. He's served as the rim threat among the Clippers' starters, parlaying that gravity into reads like the one above.

To that point: On trips featuring a Mann-led ball-screen during this stretch, the Clippers are generating 1.13 points per possession (PPP) — a mark on par with Luka Doncic's league-leading clip.

(Of course, the volume and responsibility isn't close between those two — Mann's at 13 picks per 100 possessions during this stretch, while Luka's at nearly 69 per 100 on the year — but the point is that the Clippers have been getting good stuff from Mann as of late.)

Pick-and-rolls aren't the only part of half-court offense though. And zooming out, the Clippers have posted a 95.7 offensive rating in the half-court; that ranks 21st over the last five games, and is only slightly better than their season-wide mark (94.8, 24th).

The idea of Mann kicking off possessions has a similar feel to Marcus Smart (or Derrick White) with the Boston Celtics. If Mann (Smart/White) is tilting the defense with a drive, that means he's kicking it out to Kawhi and George (Jayson Tatum/Jaylen Brown). The theory is sound.

Mann doesn't have the kind of passing chops that Smart does, which lessens the overall impact of that gambit. Beyond that, Smart's role in that dynamic is a bit of a luxury. The Clippers currently need Mann to shoulder that kind of load right now.

That speaks to the growth Mann has shown throughout his young career, but it also signals a problem team-wide. And this is where we put on our glasses and look at what the Clippers have gotten out of John Wall and Reggie Jackson lately.

Let's take a cursory glance at the box-score numbers since the beginning of December, shall we?

The efficiency isn't really close. Narrow it down to the latest five-game sample, and the gap is even wider.

On drives specifically, you really start to see difference between the three. Per Second Spectrum, here are the numbers on drives that feature a paint touch since Dec. 1:

Add in just how much better Mann has been defensively, and you start to understand why we're getting close to recycling the "Do the Clippers need a point guard" question from the past two seasons.

It's undeniable that they've gotten underwhelming results from their point guard stable this season, so much that Mann has had to shoulder more of that load as of late. The Clippers could certainly benefit from better point guard play.

Do they need an actual point guard? I'm still not sure I'd press that button, though it's worth mentioning they've recently been linked to Mike Conley, per the reporting of Substack's Marc Stein. Maybe they think so.

Conley could help some of the half-court quarterbacking. He's averaging a career-high 7.5 assists this year, and can still get busy behind the arc. On the flip side, he's in the midst of his worst inside-the-arc season; he's converting a career-low 42.9% of his twos, with a lot of that due to a career-low 50% clip inside of three feet.

If they're interested in Conley, would they be willing to kick the tires on a reunion with Chris Paul? Like Conley, he could provide some structure in the half-court. There's a similar aversion to the rim, and uptick in volume from beyond the arc. Both have partial guarantees for next season (and beyond, for Paul). I'm just sayin'.

Before he was eventually moved to the New York Knicks, the Clippers were linked to Derrick Rose as a potential suitor. Rose currently finds himself outside of the Knicks' rotation; I'd doubt it would take much to acquire him if there was still interest there.

The answer could be another wing to operate as the tip of the spear. Maybe the perpetually-available Eric Gordon, since we're on the topic of reunions.

Regardless of which pathway is chosen, the current setup feels untenable. They haven't done enough from beyond the arc, in terms of volume (12th in three-point rate) or efficiency (37.3%, 10th), to compensate for the lack of juice they're getting at the rim — 23rd in rim rate, 26th (63.8) in efficiency.

Until we see change in one or both of those areas, the Clippers' title hopes will be just that: Hope.