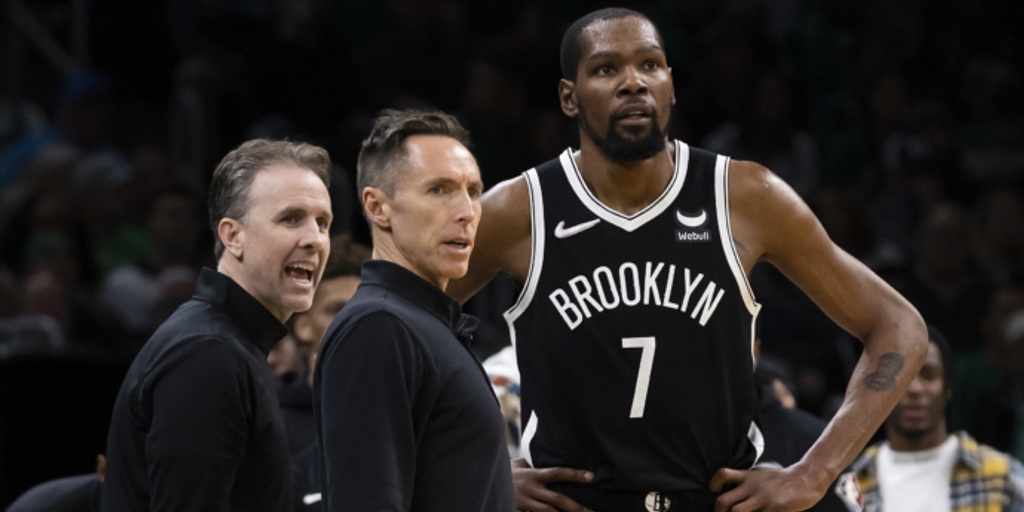 Things could get messy with the Brooklyn Nets.

Most of the chatter surrounds Kyrie Irving's future. He's up for new money — either on an opt-in-and-extend deal, or by opting out and testing the free agent market. The Nets are reportedly willing to play ball, but not in the way Irving wants. That ranges from a shorter-term deal, to an opt-in-and-prove-it type scenario.

Irving, of course, wants long-term security. He's one of the most talented guards to lace up a pair of sneakers, and balled out in (self-imposed) limited action to the tune of 27.4 points on 59.2% True Shooting, and a shade under six assists per game. If he and the Nets aren't able to come to agreement, he's reportedly ready to find a new home via sign-and-trade.

That's enough to flip this summer on its head. But the domino effect could lead to an even bigger shift: Kevin Durant wanting his Brooklyn exit too.

The Athletic's Shams Charania has reported that Durant is monitoring the Irving situation and mulling his own options. On the most recent episode of The Lowe Post, ESPN's Zach Lowe said that teams are already setting up contingency plans for a potential Durant pursuit.

We're less than a week out from Irving's opt-in decision, which means it's more than possible he and the Nets are able to find common ground and we laugh about all of this. But if they aren't, and Durant actually becomes available, there isn't a team in the league that won't inquire.

And why would any team skip over the possibility to acquire a top-15 player of all-time? This is a player who just slapped up 30-7-6 on 63.4% True Shooting this season, and was in the thick of the MVP race before suffering an MCL injury in mid-January.

Though Durant doesn't have the threat of free agency as leverage — he just signed a four-year extension last August — you have to assume he'll have some say in his next stop, if it gets that far. The Nets will want to do right by him. And with him heading into his age-34 season, it's fair to assume he'll want to land somewhere he'd have an immediate chance to win.

The challenge from there will be finding teams that have enough to offer the Nets to appease them — because you're not getting equal value for Kevin freaking Durant — while also having enough of a supporting cast to pursue a title with.

The first team that came to mind was the Phoenix Suns.

They have a trio of young pieces — Mikal Bridges, Cam Johnson and the oddly-wasn’t-given-a-max Deandre Ayton — they could theoretically offer up. Between Ayton’s max in a sign-and-trade, Bridges’ extension kicking in and Johnson’s team option, the Suns could easily get to north of $40 mililion in salary to make it work.

(There could be some haggling for Johnson. The Suns do have all their picks from 2023 and onward — and it's not like they're fans of the draft anyway — so maybe they'd be willing to sub in future firsts in an effort to keep Johnson.)

I can hear Boston Celtic fans yelling now because of the age gap, but using Jaylen Brown as the centerpiece of a deal for Durant is feasible. They'd love to form a Big Three with Durant, Jayson Tatum and Brown of course, but it's hard to picture a package of Marcus Smart, Al Horford, Grant Williams, Payton Pritchard and picks getting it done. Starting with Brown would get them in the room pretty quickly.

Then there are the Miami Heat, who would try to use Tyler Herro as the blue chip piece to build a deal around. With Herro's question marks as a lead-dog — can he get to the rim enough? — and defensive shortcomings, on top of him being extension-eligible this offseason, I don't know if that would be enough. Herro and Duncan Robinson wouldn't be enough salary anyway, and it's hard to imagine the Heat toss Kyle Lowry into a deal considering a) what it cost to bring him in and b) his relationship with Jimmy Butler.

And to that point, a Durant pursuit could serve as a fork-in-the-road moment for this franchise. Whose timeline is most important: Butler's or Bam Adebayo's? Because like the Celtics with Brown, the Heat could put themselves in the room easily by offering up Adebayo in an effort to maximize Butler's window. I'd be shocked if they went that route, but it's something to keep in mind.

There are funkier options that intrigue me. Lowe already touched on it in his most recent pod, but Zion Williamson (and other stuff) for Durant is something to think about. The New Orleans Pelicans have enough young prospects (that may not even have room to crack the rotation, as things currently stand) to raise Brooklyn's brow. Even with the health concerns for Williamson, it's hard to pinpoint a trade headliner with his kind of potential.

The other issue with a Zion-led package is his current cap number, a little over $13 million. Him plus other young pieces sound nice in theory, but it'd be hard to cobble up the salary to match Durant's number from there. At best, it would cost them Jonas Valanciunas, who Brooklyn could use or ask to be rerouted to a third team. One way to make all of this easier would be to swap out Zion and use Brandon Ingram as the headliner instead. New Orleans would have to decide if they'd want to push that button following the postseason run Ingram just had.

The Toronto Raptors could offer up Scottie Barnes as a headliner, though I'm sure they would try to keep him (and Pascal Siakam) out of talks. Would three of Fred VanVleet, OG Anunoby, Gary Trent Jr. or Precious Achiuwa plus pick equity get it done? The Raptors do own their first-round picks moving forward.

The Memphis Grizzlies have enough non-Ja Morant pieces — Jaren Jackson Jr and Desmond Bane in particular — to put something together if they want. If the on-court potential of Morant and Durant isn't enough, they'd easily be the most prolific Twitter duo in the league. But the "if they want" looms large in this regard. They may not want to give up on JJJ considering his importance to their defense. And as good as Bane is offensively, it's at least fair to question what his potential as a legit primary guy is.

If there's one other team worth monitoring here, it would be the New York Knicks. Between Julius Randle or RJ Barrett — offering up both would defeat the "having something for Durant when he gets there" point — they have something to build a deal around. Immanuel Quickley would likely be involved regardless of which headliner the Knicks choose.

Beyond that, the Knicks have the mid-tier salaries necessary to match Durant's number, as well as an influx of future picks due to their draft-night moves. If their cards are played right, there exists a world where they could cobble a deal together for Durant, have at least one young(ish) guy they like, and meaningful enough cap space to make another splash.