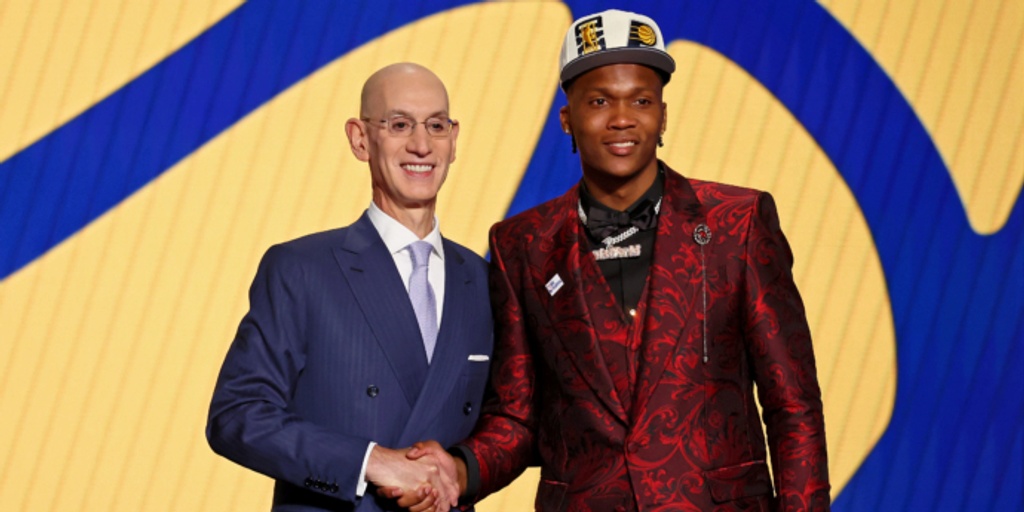 The 2022 NBA Draft had a consensus top three, which eventually turned into a top five atop the board: Duke’s Paolo Banchero, Gonzaga’s Chet Holmgren, Auburn’s Jabari Smith Jr., Iowa’s Keegan Murray and Purdue’s Jaden Ivey. Throughout the pre-draft process, one player continued to be slept on and left out of this top tier: Arizona's Bennedict Mathurin.

After being selected No. 6 overall by the Indiana Pacers, the 20-year-old wing is ready to prove that he’s one of the best players in this draft.

Mathurin, the PAC-12 Player of the Year, averaged 17.7 points, 5.6 rebounds, 2.5 assists and 1.0 steals per game on an efficient 57.6% True Shooting. A huge sophomore leap for Mathurin showcased how translatable his game is within the modern NBA. Everything Mathurin excels at and everything that NBA executives are coveting these days are one in the same. Not only is Mathurin an explosive athlete, he’s seemingly unfazed by defenders within his shooting pocket. With an ability to hit contested looks at a well above-average clip already, the offensive upside for the former Arizona Wildcat is immense.

Mathurin’s two-way potential is through the roof, but his wiring is what sold the Pacers on him from the beginning. Once Indiana found out they were selecting No. 6, they zeroed in on Mathurin. The Pacers’ entire front office, including head coach Rick Carlisle, were present at Mathurin’s Pro Day in Santa Barbara last month.

During Mathurin’s workout in Indiana, he struggled during a certain drill where he was supposed to hit 20-of-25 shots in order to ring a bell. He came up short, and it bothered him. Mathurin was determined to ring that bell before leaving the next morning, so he asked if he could do a second workout that evening. This was a first for the Pacers. Carlisle decided to use this extra session as an opportunity to work with Mathurin one-on-one.

"That was my motive to come back to the gym," Mathurin said. "When I really want to achieve something, that means I’m gonna do it. I came back the same night with Coach Rick and made sure I rang the bell before I left Indiana.”

Mathurin’s maniacal work ethic didn't go unnoticed. Carlisle and the Pacers were blown away by Mathurin during his visit, and they knew by the end of the night he was going to be their selection at No. 6 overall.

“He had his workout in the morning and then we had lunch with him and he was going to be staying over that evening and traveling out the next day," Carlisle said. "He asked if the gym was open and if he could come back at 8:00 at night to work out and just work on some things. I said, ‘Sure, how about I meet you at the gym?’ He said, ‘Yeah, that’d be great!’ So, we got together and had about an hour session, working on footwork and stuff like that.

"It told me a lot about him as a guy that really has a great intellectual curiosity for the game, a great love of the game. Guys that have a chance to really succeed and achieve in this league have a real fascination with self-discovery of getting better. And he’s one of those guys. I could just tell. I could tell in the morning, but that evening, it was clear to me that this was our kinda guy.”

Based off his on-court fit alone, you might not find a better backcourt marriage formed from this draft than Mathurin joining Tyrese Haliburton in Indiana. With Haliburton’s elite floor-general skills and three-point shooting prowess coupled with Mathurin’s aggressive three-level-scoring profile, they perfectly complement each other and have the makings of a dynamic backcourt for years to come.

Indiana’s selection of Mathurin was their first pick inside the top-10 since 1989 (when they took George McCloud at No. 7 overall). A historic moment for the organization over three decades in the making, they are banking Mathurin realizing his full potential and blossoming within their system. With a point guard like Haliburton setting him up, plus an early bond formed with his new head coach, Mathurin has a chance to have an immediate impact during the 2022-23 campaign.

“The staff was really good to me when I went there for my team workout," Mathurin said. "I feel like they really believe in me.”

With the selection of Mathurin and the acquisition of Haliburton back in February, the Pacers have ushered in a new era. Indiana has been reluctant to rebuild in the past, but with a sturdy foundation now in place, prioritizing the development of their young core is the wisest move to make long-term.

“As we build out this team, I wanna say this: it’s gonna take a little bit of time,” Pritchard said. “The draft is one part of a chance to build a team, a chance to remake a team.”

Although the Pacers didn’t trade any veteran players on draft night, expect to see the Pacers to continue remaking this roster around Mathurin and Haliburton. Also, last year’s rookie class of Chris Duarte and Isaiah Jackson figure to play key roles for years to come as well. Malcolm Brogdon has been one of the hottest names on the trade block, plus Myles Turner’s availability continues to be bandied about. Don’t rule out Buddy Hield or TJ McConnell as potential trade candidates as well, if Indiana really wants to put themselves into the chase for projected 2023 No. 1 overall pick Victor Wembanyama.

For the betterment of the organization, Indiana embracing a rebuild is long overdue. Seemingly shifting course once Haliburton arrived, the Pacers had a golden opportunity to reset their overall calculations. During the draft, Indiana placed an obvious emphasis on improving their athleticism.

“Since really around the trade deadline, we made some moves to get this team more dynamic,” Carlisle said. “We were last in the league in dunks at that point in time, and then some things happened, we moved some pieces. Isaiah Jackson who’s here. Tyrese who’s here. And things just went the other way.”

The more you watch of Mathurin at Arizona, the more you realize he’s just beginning to scratch the surface of his two-way potential. Although Mathurin was very inconsistent on the defensive end, with his athleticism, he has the potential to become above-average in that area. On the offensive end, Mathurin could be a consistent 20-plus point-per-game scorer since he'll have the ultimate green light alongside a pass-happy point guard in Haliburton.

In Indiana’s free-flowing offense under Carlisle, Mathurin could easily see a heavy workload early on as he develops. Possessing such a clean shooting stroke and explosive pop off of one or two steps, Mathurin has the framework to become a consistent All-Star. And with his work ethic already turning heads in Indiana, he’s ready to help turn the organization around as a culture-changer.

“I mean, I bring my heart to the Pacers,” Mathurin said. “I’m really fortunate for them to draft me. My goal is to have an impact already on both ends of the floor and bring Ws to the team.”

Everyone discusses the likes of Banchero, Holmgren, Smith, Murray and Ivey. Don’t be shocked if Mathurin forces his way into that conversation. After taking massive leaps over the last few years, Mathurin’s upside makes him one of the most intriguing prospects to follow entering his rookie season.