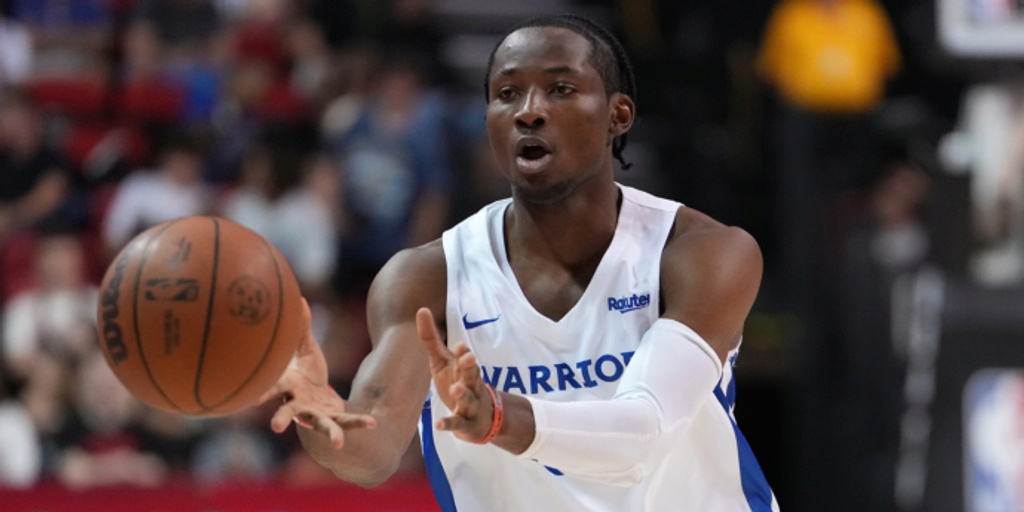 Even with the sporadic nature of his minutes and his role, Jonathan Kuminga’s rookie year with the Golden State Warriors couldn't have gone much better.

At just 19 years old, he’s already a champion, and there were many moments throughout the regular season and playoffs when he strutted his stuff. His top-tier athleticism drew the eyes of many, whether it was via a bursty, sky-high slam, a leaping rebound, a sneaky steal or a block out of nowhere. On top of that, with a 6-foot-8, 210-pound frame, he already had the NBA body to match.

But with Steph Curry, Klay Thompson, Andrew Wiggins, Draymond Green and Jordan Poole dominating the ball for good reason, there was little opportunity for the rookie forward to actually run the show. So, with NBA Summer League underway, the Warriors have put that responsibility on Kuminga — and he hasn’t shied away from the challenge.

Through three games in Las Vegas, Kuminga is averaging 20.3 points, 3.7 rebounds and 2.3 assists per contest on 42.6% shooting from the field. Moreover, he is leading the entire Summer League with a whopping 39.1% usage rate, taking over 18 shots a night in the process, and working on what he does with the ball in his hands.

Believe it or not, Kuminga didn’t get off to the best of starts.

In Golden State’s Vegas summer opener against the New York Knicks, he went 2-for-10 from the field for only 4 points and coughed the ball up 5 times. His decisions weren’t the greatest, electing to drive into multiple bodies and appearing a little out of control.

The sophomore’s second game, on the other hand, was a different story. From the tip, Kuminga played at his own pace, and it led to a thunderous connection with the debuting James Wiseman on a high handoff for the Warriors’ first bucket of the ballgame.

"It was nice,” Wiseman said of the alley-oop. “We got like a great tandem, but I'm still just trying to figure out how he plays, the screens that he wants, so I can dribble to the basket and we can just figure it out. But yeah, it's all coming together."

Despite his threes being off the mark, Kuminga continued to take better shots, most of which came via self-creation with a smooth stepback. He’s still a locomotive with momentum going toward the rim too, and that threat allowed him to pour in points with a short middy. However, Kuminga imposed his will and got to the line a whopping 18 times.

He ended up with 28 points, 7 rebounds and 4 assists on the night, converting on the game-winning free throw vs. the San Antonio Spurs.

“I know what I’m capable of doing. I’ve just gotta execute and just help the team win... The big difference was just to come out here and prove to certain people that I’m still a (good) player,” said Kuminga, who said he went right back to work after his down performance against New York.

Warriors summer head coach Jama Mahlalela felt Kuminga was trying to do too much in the first game, and in response, told him to slow the game down and let it come to him.

“He was probably less aggressive early, but ended up with way more shots and way better shot selection and presence on the court,” Mahlalela said. “And I think as a player, he realized the more he can move the ball early, the better it will come back and have it near the end. So we’re really proud of him. His pick-and-roll stuff with Mac [McClung] was really good. That kinda invert pick-and-roll, small stuff was really awesome. So good for him.”

Kuminga built on that with a 29-point effort on 11-for-22 from the field, making it back-to-back games with 22 shot attempts. Better yet, he only turned the ball over once against the Boston Celtics after recording 10 total miscues the previous two games. In addition, Kuminga hit 5-of-8 freebies after a 7-for-22 combined showing prior.

There are definitely things to work on. His perimeter jumper is inconsistent right now, as are his dribbling and overaggressive closeouts. And while he clearly wants to make the right play, his execution still has a ways to go.

Having said that, this is an opportunity to go outside of the proverbial box and try something new, and Kuminga is not taking it for granted. He’s found a weapon in that 10-to-12-foot pull-up attacking from the perimeter, has easily created space for himself, has made some solid reads and has driven with the intent to destroy anybody in his path. If you don’t believe that, look at the two missed dunks he’s had — wow.

With the Warriors losing multiple key rotational pieces to free agency, guys like Moses Moody and Kuminga must step in and play their respective parts for the defending champions.

It’s a moment Kuminga has been preparing for since he started this pro journey in Walnut Creek, California with the G League Ignite.

“I mean, I feel good, especially [coming from] the Ignite. I feel like they helped me a lot. I learned the game faster,” Kuminga said. “Having vets like Jarrett Jack and Amir Johnson, just being around those types of dudes is just the same as being around Draymond, Steph and Klay. I’m learning the game faster. I’m not gonna learn everything at the same time, but as long as I’m still around those guys, they just help me.”

That’s not a bad group of guys to get advice from, and it’d be surprising if the Golden State trio’s wisdom didn’t pay off — for both the team and Kuminga.