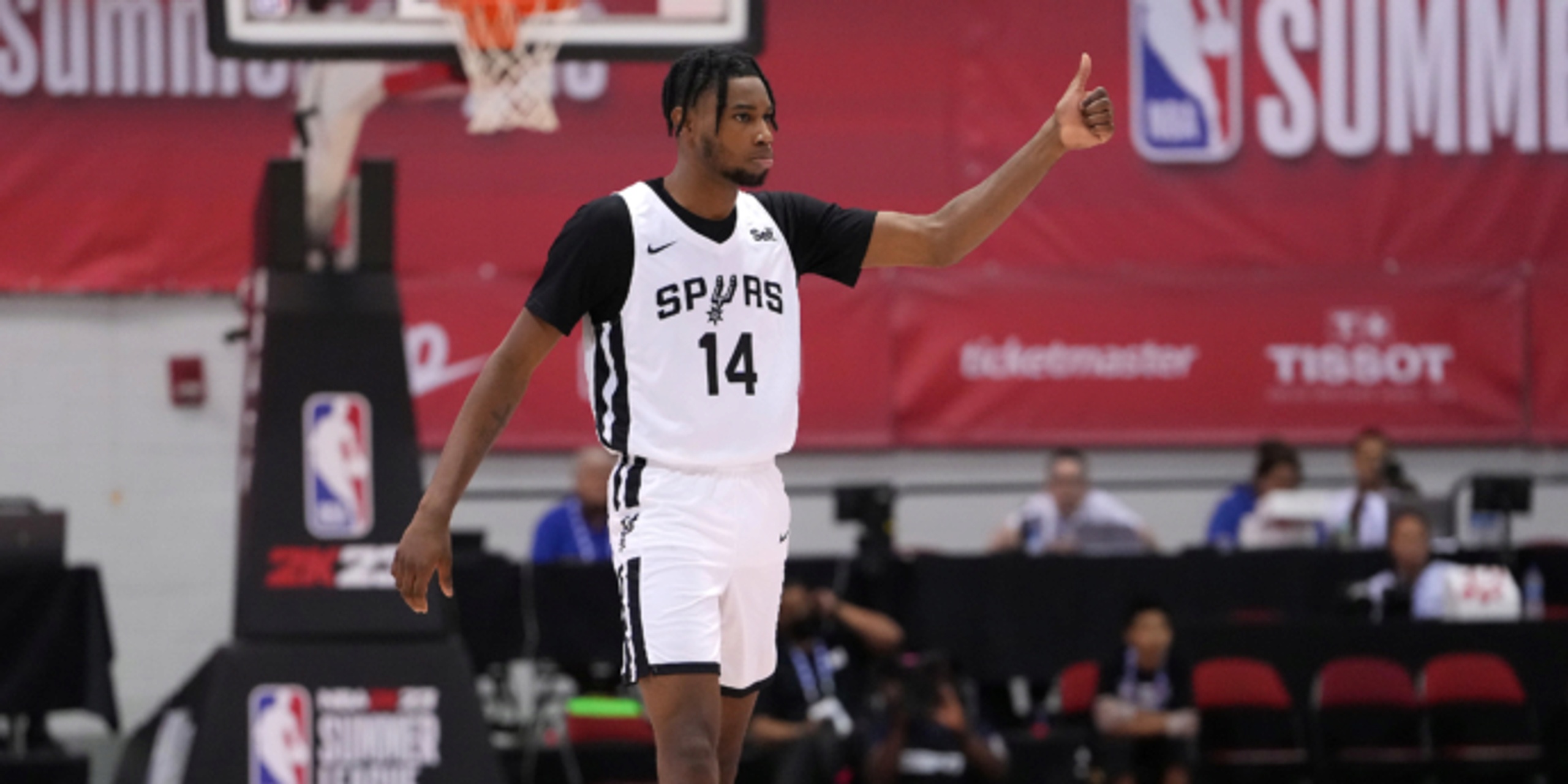 NBA Summer League is one giant laboratory for young players and coaches. Within the Thomas & Mack Center and Cox Pavilion, we can grasp at a multiverse of futures, both for individuals and the league at large.

The San Antonio Spurs think they've found an innovative talent in their fractal of possible outcomes. Blake Wesley turned heads in Las Vegas with his ball-dominant role, and Spurs summer league coach Mitch Johnson believes the rookie is indicative of a movement at the guard position.

Though it was just Summer League, Wesley relished the chance to break himself in as an orchestrator.

"I see myself as a point guard, so going into the NBA I feel I'm gonna be a point guard," Wesley told Basketball News over the phone. "A big key to the Spurs is [being] 6-foot-5, long [and] athletic, so to get guys open is gonna be good for me. I'm gonna get to the paint and find guys."

Wesley handed out at least four assists in all but one of his Summer League contests; he cleared that bar just seven times in 35 contests while a freshman at Notre Dame. The summer Spurs put the ball in his hands early and often, and Wesley showed ease with making plays out of his drives.

In his best moments, Wesley recognized how defenses collapsed around him when he exploded down a lane. He read drop and help defenders, and uncorked some lasers out to perimeter shooters. In the second highlight of the above clip, we're already seeing how Wesley can draw nail help and hit the shooter one pass away.

This pass was bonkers. For Wesley to arrive at this dime, he has to shrug off his initial defender, force help to come over, recognize where the next defensive rotation will be and then wrap the ball around all of them to hit an open Robert Woodard II.

Summer League was expectedly imperfect for a rookie getting his first taste of NBA action. Wesley averaged 17.0 points, 4.0 assists, 3.6 rebounds and 1.6 steals in those five games. He also gave away 2.8 turnovers per game and shot just 27.6% from two-point range (and 34.4% from distance). But the No. 25 pick felt like he belonged with the league's top young talent.

"I felt good," Wesley said. "It was a good experience — a lot of people [in] their first game. [I was] playing against other rookies, other veterans and stuff like that, guys older than me, bigger than me. So to be out there was fun."

Wesley's been an NBA player for barely a month, and still must get ingrained with Gregg Popovich and the rest of the coaching staff. He says that Johnson and Josh Primo, last year's No. 12 overall pick, have helped him make the pro transition smoothly.

Wesley has also spent his first month jelling with his rookie teammates, including fellow first-round picks Jeremy Sochan and Malaki Branham. Sochan and Wesley were already friends and nearly EYBL teammates on Indy Heat before the COVID-19 pandemic forced Sochan back to his home in England.

"I knew Jeremy for a long time, and I know Malaki now. We're all close; we all hang out," Wesley said.

The 19-year-old has a couple of months to get ready for the NBA regular season. Wesley already can't wait to face Ja Morant, another uber-athletic guard, and LeBron James, who is nearly twice his age.

The young guard should receive some trial-by-fire minutes on San Antonio's young roster. Dejounte Murray's departure to Atlanta opens a hole in the backcourt. Wesley isn't an exact stylistic match, but at 6-foot-5 with length and an ability to breeze to the paint, he and Murray share some similarities.

He knows his first jop his to learn from Popovich and his teammates, and find his niche as an NBA playmaker.

"I'm gonna go in and do my role," Wesley said. "Whatever Pop tells me to say or tells me to do, I'm gonna do it. They want me to go in there and be a point guard, so I'm gonna have to keep my point guard skills, get better, get stronger and be ready to work."