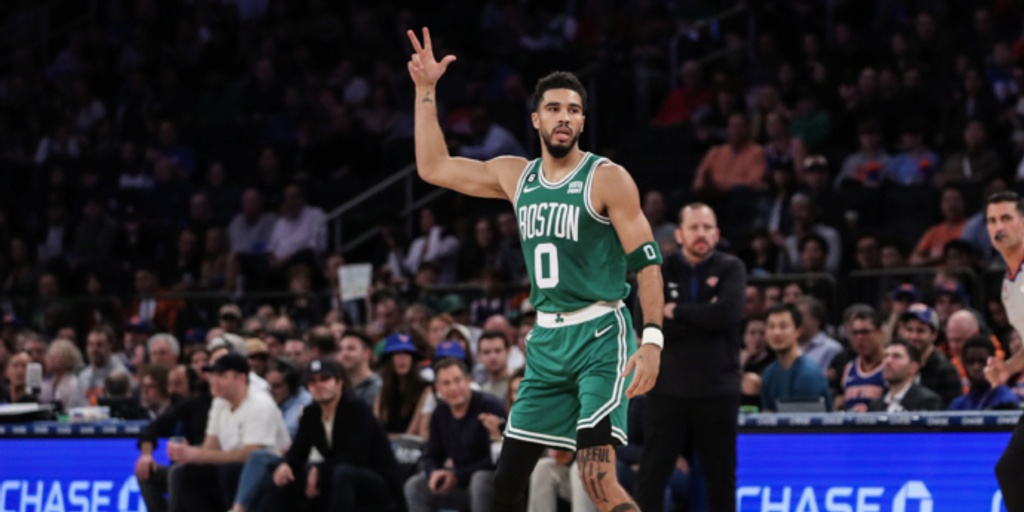 This isn't the Boston Celtics offense that many have come to know and, at various points, loathe.

The Celtics wield the best offensive rating in basketball. They're off to a 10-3 start this season and have scored 110 or more points in 11-of-13 contests. And most impressively, in a year where transition play is on the rise and the leaguewide halfcourt offensive rating is actually down from the past two seasons, Boston has been historically unstoppable.

According to Cleaning the Glass, the C's are averaging 107.6 points per 100 possessions of halfcourt offense. That would be by far the highest number in the history of the site's database, which tracks back to 2003-04. The gap between Boston and second-place Dallas (101.7) is equal to the gap between the Mavericks and the 14th-place Chicago Bulls.

The Celtics are shredding opponents nearly every single night, even as their top-ranked defense from last season is still working out early-season kinks.

It's not like Boston completely overhauled its roster. Malcolm Brogdon was a key offseason signing, as was Sam Hauser (we'll touch on both of them), but the core of the rotation is the same. Payton Pritchard, the best shooter on last year's team, no longer receives regular minutes.

As far as passing — the Celtics hand out 275.5 passes per game, which ranks tied for 22nd in the NBA, according to Second Spectrum. They average 3.18 seconds per touch (ranked t-15th) and 2.41 dribbles per touch (ranked t-10th). So the ball isn't constantly buzzing around the court — instead, the Celtics are emphasizing purposeful ball movement with their spacing and driving.

“We want to put pressure on the rim, we want to finish at the basket,” Al Horford said after Friday's win against the Denver Nuggets. “At the same time, we have to have good spacing around [Jayson Tatum and Jaylen Brown] in case that doesn’t happen. We play inside-out. We get those threes. It’s just the way our lineups are. We have five shooters out there, so we’re really spreading it out.”

The success obviously starts with Jayson Tatum's career year. The 24-year-old is in the midst of his most efficient season ever, averaging a career-best 132.1 points per 100 shot attempts to power his 31.4 points per game. He's shooting 38.7% from long range and decreasing his turnover rate despite being a notoriously slow-starting player.

Tatum's most eye-popping statistic so far is his absurd 79% finishing rate at the rim. Most of those buckets are self-created, where he has taken yet another step forward as a decisive driver while adding hints of a floater game. However, I'd like to steer over to his assisted attempts at the basket. Tatum is 25-for-29 (86.2%) on shots within 10 feet where he held the basketball for less than two seconds. That's unsurprisingly a career-high, per PBP Stats, and it also comes on his highest frequency of attempts in the last four seasons.

It is always easier to accelerate without dribbling a basketball. Boston has used that knowledge by giving Tatum off-ball screens to let him loose and having him surprise teams with delayed cuts (Adam Taylor of CelticsBlog wrote a nice article about those). You'll also see him work as a screen-and-slipper in the above reel.

The goal is to either manufacture a driving lane for Tatum or force a switch onto a bad matchup in bad positioning. Jaden Ivey doesn't stand a chance in his effort against a speeding Tatum. Help defenders aren't even prepared to rotate in some of the other clips.

You'll notice one possession where Marcus Smart feeds a cutting Tatum out of a post-up — leading us to the next hidden offensive development.

Marcus Smart up to 48 assists and just six turnovers in his last five games. Easily the best stretch of his career on that front.

Smart's point guard wizardry has been on full display this season. Quietly, he's also become a post hub for the Celtics. According to Second Spectrum, Smart is posting up 1.6 times per game this season. That might not seem like much, but it it's actually 44th among all NBA players and second among all guards. Also, it's close to double his volume from 2021-22.

What's happening on those plays? In 21 total post touches, Smart has converted 6-of-8 shot attempts, passed the ball 11 times for four assists, and coughed up a single turnover. His 19.0% assist rate out of the post is third among all players with at least 10 total post-ups this season.

Smart knows when to bully his way to the basket against weaker guards. He can then finish through them or turnaround and hit short jumpers. He's also more of a quarterback out of the post, directing cutters and disguising his true intentions, as shown when he hits Horford and Jaylen Brown for assists.

Speaking of Horford — his own marksmanship has made some of the spacing he spoke about particularly effective. He's taking over half of his shots from behind the arc and drilling them at a 48% clip. And, after scarcely shooting corner threes for most of his career, the 36-year-old has exploded to start the season:

According to PBP Stats, the Celtics lead the NBA with 13.5 three-point assists per game. Horford headlines the beneficiaries.

“Mentally, I’m getting in that mindset of I’m shooting more threes and that’s just what it is," Horford told Bobby Manning of CLNS Media. "The game continues to change, and for me, it’s just trying to find a way that I can change too.”

Boston's five-out sets turn Horford into a lethal corner weapon. The Celtics use guard and wing screens frequently (exemplified with Smart in the first clip) that give a plus passer the space to make reads in the middle of the floor. Defenses have to collapse to some degree, which means Horford gets more space.

Then, you have dynamic individual drivers like Tatum, Brown and Brogdon who can fold defenses on their own and make corner kick-outs to Horford. Even Tatum's off-ball gravity pays off for Horford; look at how he makes a mid-air exta pass off of his designed play to a Horford three-pointer in the third clip.

Horford's success is a testament to Boston's ability to create open looks for their center, as well as his own improved consistency from long range. Brogdon's addition has helped generate those chances for Horford and others.

When the Celtics acquired Brogdon from the Indiana Pacers this summer, his swing skill for the franchise was his unstoppable driving prowess. The trait has blended seamlessly into Boston's new-look offense. Brogdon leads the team in drives per game and is shooting a strong 53.8% on driving shot attempts. His 14.0% assist rate on drives places him eighth among 64 high-volume drives in the NBA (with at least eight drives per game).

In these two examples, Brogdon draws in three Memphis Grizzlies defenders before making the appropriate kick-out. His physicality and ball control almost guarantees a paint touch. Then, he can get all the way to the basket if he has a lane, or send a pass back to the perimeter. Or option three: the Celtics continue to move well off the ball and he finds a cutter, like so:

This is what the Celtics should love to see pic.twitter.com/KRebKViDXE

Brogdon and the rest of Boston's attacking players need perimeter threats to make a driving, swinging offense hum. Grant Williams is a surefire sharpshooter at this point, and guys like Tatum, Horford and Derrick White have also started hot. But the latter three have a streaky history and are likely to cool off.

The second-year forward was a two-way player for Boston who primarily spent last season with the Maine Celtics (long live the Red Claws!). The franchise expressed confidence throughout the offseason that he could make the leap, though, and he slid right into the rotation spot that would have presumably been occupied by Danilo Gallinari.

Hauser has silenced all doubters so far. He's hitting 45.6% of his three-pointers, good for 15th in the NBA, and has canned some spectacular difficult shots. One of the key weaknesses Boston stumbled upon in last year's playoffs was that, despite Grant Williams shooting the lights out, defenses rarely keyed in on Celtics role-players beyond the arc. No one threatened enough to pull attention from Tatum and Brown.

This year, Hauser can build a resume worthy of defensive attention.

The 24-year-old is averaging 1.54 points per possession on spot-up plays this season, which slots him seventh among 220 qualifying players. Hauser exudes confidence, barely appearing to think before he pulls the trigger (in a good way):

He's not really a Duncan-Robinson-type who flies around screens or a Payton-Pritchard-type who steps into pull-ups. Hauser just constantly relocates and capitalizes on the space he receives while Boston's other players bend the defense. Notice how several of these attempts are open — for now, defenses still would rather contain Boston's star drivers instead of Hauser's three-ball.

That's going to change if he keeps lighting up the arc. If Hauser can remain a playable defensive piece and be enough of a threat to attack closeouts, in addition to his volume and efficiency from deep — look out. Defenses will have no choice to play the numbers game and focus more on Hauser, and that will in turn make driving the ball easier for the Celtics.

Boston ultimately has so many critical offensive developments compounding on top of each other. The Celtics' juggernaut vibe exists because the players recognize each other's strengths and have learned how to reverberate off each other. It's still very, very early; defenses will build up a film database and send counters, and the true test for this team will be how it adapts throughout the year.

But a hot start under a new coach is always welcome, and the stampede of complementary successes makes this Celtics offense appear built for the long haul.

Romeo Langford is crushing it in the short mid-range 🔥

46 NBA players have self-created over 50 shots within 10 feet of the basket, per PBP Stats.

De’Aaron Fox is the only one making more than 70% of those attempts 😳 https://t.co/0mrPzObsVl