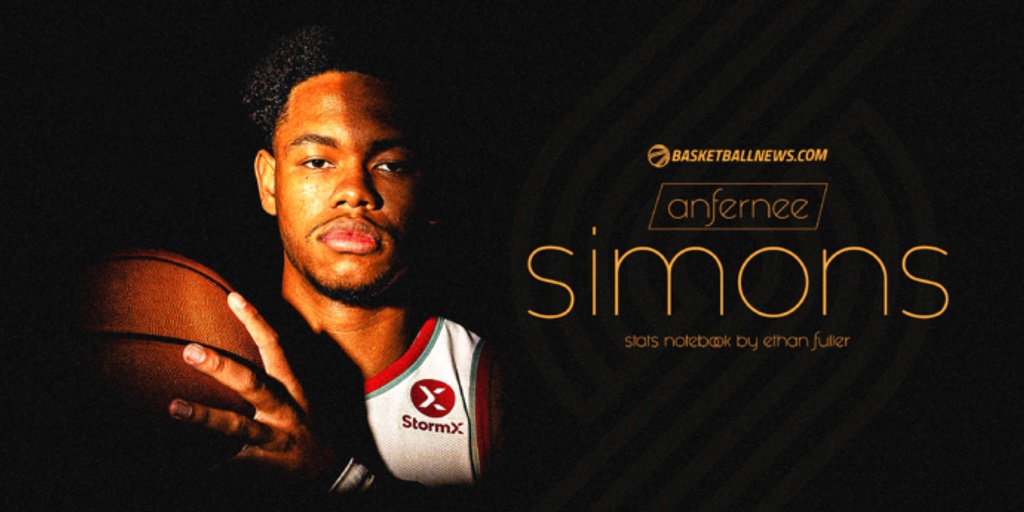 Having missed the playoffs for the first time in nine years, they lost Damian Lillard, Jusuf Nurkic and Nassir Little to injuries for large chunks of last season — and traded CJ McCollum.

To counter, the franchise geared up with some notable summer moves. They traded for versatile forward Jerami Grant and selected the 2022 NBA Draft's biggest unknown in Shaedon Sharpe with the seventh overall pick. Fast forward to Nov. 4 — Portland's injured players have come back healthy (though Lillard is now dealing with a calf injury), and the team has gotten off to a stellar 6-2 start.

Somewhat lost within the offseason retooling is that Portland's plan to replace McCollum was as critical of a question as any other pressing need. Anfernee Simons has been a gamble since he was a rare prep-to-pro draft pick from IMG Academy in 2018. Now, the Blazers are pushing their chips in with Simons, hoping the breakout he started in the lost 2021-22 campaign carries over to major minutes on a playoff contender.

So far, that bet is paying off.

Simons is averaging 36.7 minutes per game — a season-by-season career-high and also more than any individual month from 2021-22 — and putting up a career-high 22.0 points as both a backcourt partner for Lillard and as the primary guard since Dame went down with his injury. Simons' base scoring efficiency numbers are about the same as last year and slightly down in some areas, such as his 37.1% three-point clip (down from 40.5%).

At first glance, Simons doesn't appear to have gained or lost much as a scorer from last year, and one could argue that's enough of a positive. But a closer look shows the 23-year-old has improved in important areas, and if sustained, he could be growing into more than a perimeter bucket-getter.

Historically, Simons has not been much of a rim-pressure threat. According to Cleaning the Glass, that's started to change during this (admittedly tiny) seven-game start to the season.

Simons is taking just over one-fifth of his shots within 4 feet from the basket, which is a noteworthy jump up from his prior two seasons, and he's been more proficient in that range. That's come with the trade-off of fewer demonstrations of his high-level touch in the short-mid-range — but that's fine if it means getting to the basket.

His improvements near the hoop actually carry even more significance than this one table shows. To explain this, we're going to use the findings of Darryl Blackport and PBP Stats.

One of the subscriber features of PBP Stats includes a comparison tool that measures how a player is faring in different scoring ranges relative to their efficiency numbers from the past two seasons, as well as the league-wide average efficiency for the player's shot diet. In short: Is Player X shooting better in a space than he usually has, and is he shooting better in a space than the league usually does?

To this point, 137 NBA players have attempted at least 30 shots within 10 feet of the basket. Simons is making 54% of those shots in different contexts; according to PBP Stats, that's a whopping 11.4% better than expected given his last two seasons. The difference ranks third among the aforementioned 137 players, behind only Bobby Portis (13.6%) and De'Aaron Fox (15.9%).

Simons is also performing 5.8% more efficiently in this zone relative to the league-wide expectation — not quite as jarring of a difference, but a respectable one that ranks 36th out of 137.

So what's been working?

Despite Lillard's presence in five of seven games, Simons has actually seen his frequency of self-created attempts close to the basket rise up. A career-high 22.2% of his field goal attempts are shots within 10 feet where he holds the ball for at least two seconds. Amazingly, he's making 60.7% of those looks, which shatters recent seasons.

He's not a downhill athlete or an ankle-breaker. Simons has instead found comfort with his snappy ability to change speeds, often using some sort of in-and-out dribble, and then gliding to the basket. He's bouncy enough and strong enough to separate from even the best NBA defenders (take a look at Anthony Davis here) and layup shots with his arms extended well away from his body.

Simons also has some seriously impressive touch on his floater. This one came outside the 10-foot radius, but it's an example of what the young guard can do as he scans the floor and seeks out space.

Several of these clips include straight ball-screen actions. Interestingly, Simons has struggled as a pick-and-roll ball-handler; Synergy says he's averaging just 0.79 points per possession and shooting 37.7% from the field.

However, a lot of these are actually plays where Simons is pulling up from long range. He hasn't shot the ball particularly well as a three-point creator and is generally much better off the catch. In fact, Simons is making a career-low 29.6% of his self-created three-point attempts so far this season. His catch-and-shoot rate is 43.6% — a stellar rate that is still actually low for him, and that includes three dud outings in seven games that undoubtedly affect a small sample.

When Simons can use ball screens to give himself space to probe, or when he finds a tasty 1-on-1 matchup, he continues to achieve more success getting to the basket. He's not an elite finisher by any means, but the numbers and tape show Simons is improving. A healthy Lillard return should only help his young partner find easier perimeter chances off the ball and more freedom in the open court.

Look at what Simons can do as he flies around screens and shoots in the face of some tough contests. In fact, according to Synergy, Simons is third across the entire NBA in points per possession coming off of ball-screens. Defenders definitely key in on Simons as a shooter at this point, but with Lillard running the offense, they'll never be able to shift their entire focus to either player.

Simons is somehow in his fifth NBA season and still just 23 years old. He has a lot of growing left to do — we didn't talk about passing or defense at all here. But Blazers fans should feel optimistic. Simons is turning his tools and flashes into production while his team is winning, and this start is just another chapter in the young guard's ascension.

So far, league-wide shotmaking is up year-over-year vs. last season. Early season blip or a relevant trend? pic.twitter.com/KvSC7TMdMI

Andre Drummond has been inhaling rebounds this season. pic.twitter.com/6XGU9llHLM