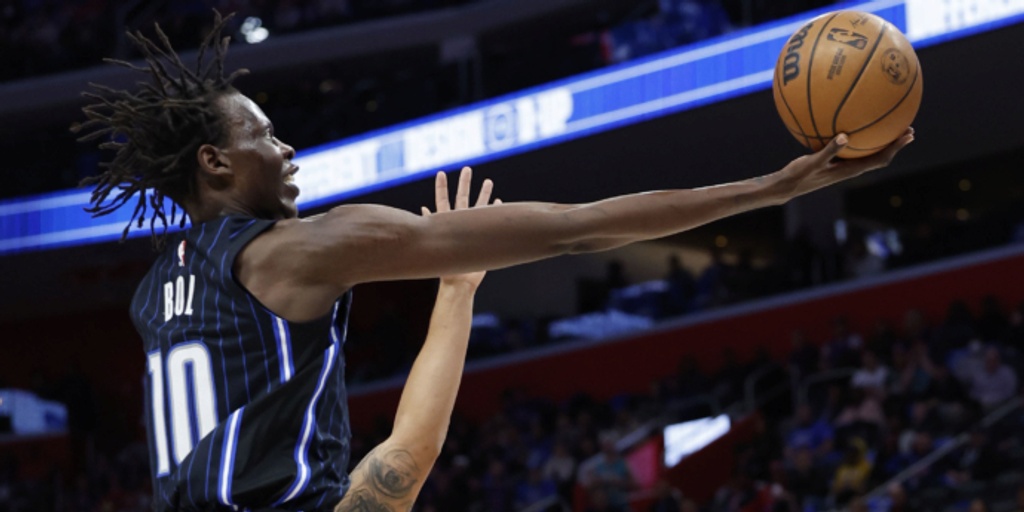 I'll open with a bit of transparency: I don't know if I'll have more fun writing a piece than I will with this one.

It's easy to get lost in Xs and Os talk, rotation suggestions, or transaction rumors. It can be easy to be bogged down by off-court nonsense — looking at you, Josh Primo, and the Brooklyn Nets, as a concept. But there are certain teams, certain players and certain stories that bring me back to the ground floor.

At its core, basketball is a beautiful game. It is art; it is music. It's poetry. It's freakin' fun, man. Watching players make the impossible look mundane is what drew me to the sport. I wouldn't care about the intricacies of Spain pick-and-rolls without having "whew, what a fun/easy bucket" as my foundation.

There isn't a player in the league that breaks my "whew" scale — or makes me laugh uncontrollably —  quite like the Orlando Magic's Bol Bol does.

He's broken my brain virtually; you're not having fun in an online 2K league without having him on your roster. The flashes he showed at Oregon broke my brain in real life. A guy that tall isn't supposed to have the shooting touch and handle capabilities that he does.

There were always valid concerns. The frame was an issue, as were the injuries he's had to work through because of it. There were questions about the motor, among other things. He slid to the second round of the 2019 draft due to a combination of those questions.

But my word, the Bol Experiment may be working in Year 4.

Through eight games, Bol is averaging career highs in points (11.1), rebounds (7.4), and blocks (2.6, 4th in the NBA) in a shade under 22 minutes a night. This has been more than the occasional flash that I freak out about on Twitter; he legitimately looks like a productive rotation player.

Injury and opportunity have thrusted Bol into the Magic's starting lineup over the last three games. He's responded strongly, averaging 13.3 points, 10.0 rebounds, and 2.7 blocks in 29.1 minutes per contest.

Honestly, "opportunistic" may be the best way to describe Bol's play to kick off the year. He's averaging nearly 2 offensive rebounds a game. Overall, 48.5% of his two-point attempts — that he's converting at an absurd 71.7% clip by the way — have been unassisted. You can think a combination of putbacks and grab-and-go sequences for that.

The grab-and-go possessions really stand out. One, it's just wild to see someone like him bringing the ball up. Beyond that, the drives have actually been fruitful. The sample isn't large; the good folks at Second Spectrum have him pegged for 17 drives on the season. But the Magic have generated over 1.3 points per possession (PPP) on trips featuring a Bol drive.

The real fun is that the drives have featured some kick-outs. If he shifts from one-track minded to 1.3-track minded, you consider that a win if you're the Magic. These aren't Luka-like reads, but this is growth worth keeping an eye on.

Defensively, I find myself in awe of Bol's length and range.

You will often see Bol in an off-ball role, either defending a weaker opponent or defending an area as part of Orlando's zone. If he isn't directly involved in the action, he's able to sink down to disrupt drives and spray back out to bother (or dissuade) catch-and-shoot opportunities. Even when he isn't in great position (more on that shortly), his massive wingspan allows him to alter or block shots anyway.

Among 77 players that have defended at least 75 shot attempts, Bol's contest rate (92.59) ranks 12th on the list, per Second Spectrum. That puts him right behind players like Anthony Davis (93.59) and slightly ahead of guys like Giannis Antetokounmpo (92.51).

Aside from the grab-and-go potential, the shooting was the primary calling card for Bol offensively entering his draft year. He hasn't knocked down triples at a high clip (33.3%) or with much volume (1.1 attempts).

To the volume portion, a lot of that is because of Bol's limitations. Because of his struggles to deal with physicality, opponents are comfortable stashing perimeter players on him. What would be pick-and-pop situations are typically switches, negating much of the benefits for Bol.

There's a ton of room to grow as a screener. Again, the frame limits him from being a Steven Adams-esque bully, but it still doesn't feel like he has a firm handle on timing or angles to pry guys loose. I've been on a screening kick lately, and it should come as no surprise that Bol grades poorly in terms of contact rate — meaning how often he generates contact on his screens.

It's not a situation like Brandon Clarke, where he's good at screening but ranks low in generating contact because he's so good at slipping; Bol just has to get better at screening as a concept.

If he's able to do that, more scoring opportunities should rise. Pick-and-pops will open up. The Magic could further explore his usage as a handoff hub if he generates contact better; he already has enough of a handle to fool opponents with fake handoffs. But before that can be a present threat, he has to be able to pry his handoff partner open and force rotations.

On the other end, Bol's spatial awareness still needs work. While his length can help cover his mistakes, it's still worth noting some of the mistakes he makes, particularly when he's tasked with tracking multiple actions at once.

Bol is often stashed on weaker perimeter players, and that weakness speaks to that player's scoring prowess and literal strength. Bol simply doesn't have the strength to deal with 5s. Even some guards have been successful in getting into his chest on drives and pushing him backwards.

He still struggles sliding laterally, and has bigger issues flipping his hips and changing direction. That's led to some pretty ugly "contain" sequences from him. It's telling that he's among the league leaders in blocks, but opponents have converted nearly 67% of their shots at the rim against Bol to this point of the season.

But for now, the positives are outweighing the problem areas for the first time in his career. The Magic have a plus-4.6 net rating in Bol's 173 minutes, and have been dusted (minus-13.8) in their 211 minutes without him. The split looks even better if you remove garbage time.

Cheers to Bol for producing, and an even bigger hat tip to him for being fun while doing it.