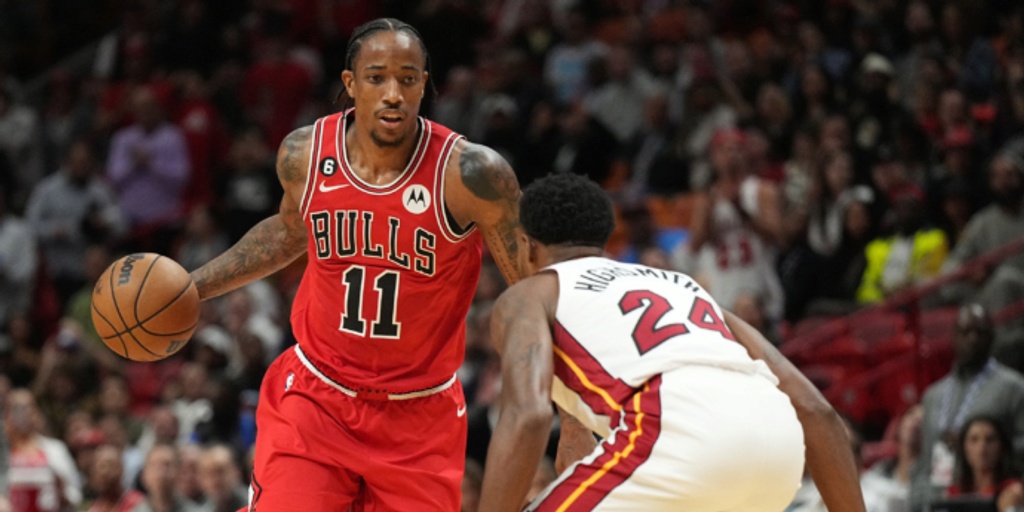 NBA Stats Notebook: DeMar DeRozan is much more than a bucket

Has DeMar DeRozan felt overshadowed to you?

Maybe I need to add to my curated Twitter feed or take a step back from all of the storylines bound to come out of NBA tipoff. But amidst the many electric performances over the past three days, DeRozan's season debut — as dominant as any we've seen so far — hasn't appeared to elicit quite the same national praise as his peers.

DeRozan dropped 37 points on 63.6% from the field and added 9 assists, 6 rebounds and 2 steals for the Chicago Bulls in their Wednesday night win against the reigning Eastern Conference top-seed Miami Heat. He's the second Bull to ever post a 30-5-5 game in a season opener; Michael Jordan did it three times. DeMar's 37 points are also the most by a Bull in a season opener since Jordan in 1995.

Yet, the 14-year veteran is not driving headlines like some other stars. Quincy Pondexter even tweeted that DeRozan is the "most underrated player of this generation." While that's a separate conversation entirely, DeMar is definitely deserving of recognition, and as much more than the mid-range assassin he's come to symbolize.

Since joining the Bulls, DeRozan has eviscerated teams in late-game situations. Check this out, via Secret Base, one of the best follows in sports media:

And then, we get to the quote tweet from Basketball Reference:

Highest FG% in the 4th quarter since the beginning of last season (Min. 100 FG):

Field goal percentage is a very surface-level stat in this age that lacks a lot of context. But that surface level — how often a player makes the shots they take — can still be useful, and it's telling with DeRozan. This man is just a walking bucket, especially in the fourth quarter.

Watching DeMar DeRozan in the fourth quarter of games is truly amazing. Teammates were throwing him grenades late clock — he found ways to get buckets anyway.

Bulls upset the Heat on the road without Zach LaVine to go 1-0. pic.twitter.com/dK8FRzmAFx

Steph Noh highlights that DeRozan wasn't just meandering his way into rhythm jumpers; these were difficult situations that he willed into the basket. And how about that pull-up triple?

DeRozan made two of three long-range shots against Miami. Very quietly, and on just under two attempts per game, he shot a career-high 35.2% from distance last season. That included a 36.1% clip on catch-and-shoot threes. He's still not a major threat shooting behind the arc, but if DeRozan can knock down the shot off of feeds from Nikola Vucevic (and a healthy Zach LaVine), those are open points.

We shouldn't just gloss over his mid-range prowess, either. DeRozan is one of the best in recent NBA history, and Chicago has given him even more freedom to pressure defenses. According to Cleaning the Glass, 71% of DeRozan's field goal attempts came from the mid-range — tied for a career-high. He took a whopping 1,099 mid-range shots and made 49% of them — also a career-high.

Included in that rate is a scorching 53% efficiency mark on "short mid-range" attempts between 4 and 14 feet from the hoop. DeRozan might not be getting all the way to the rim, but he can burst or bully his way to his spots, as he showed on Wednesday. Give him a mismatch, and he'll get an easy floater; give him an empty corner or open baseline, and he'll find a way:

But offense is about more than a bucket. DeRozan has become one of the best orchestrators in the entire league. Last year, he finished tied for fifth in the NBA with an adjusted assist-to-pass ratio of 18.3%. That means that 18.3% of his passes led to either points or free throws for a teammate. It's the third-highest rate of his career behind two seasons in San Antonio, but it makes sense given that DeRozan now has LaVine sharing lead playmaking duties.

The 33-year-old draws so much attention as a scorer that the defense often gives up passing opportunities. And even as he appears to be settling into a scoring move, DeRozan has his eyes open on the full court.

Cool Bulls 4Q moment highlighting DeMar DeRozan's gravity. Alex Caruso with a guard screen and slip (love!). You see Adebayo, Butler and Lowry are all so locked in on DeRozan though, that him plus Caruso's screen totally take their attention from Vucevic. Vuc slides up for a 3 pic.twitter.com/0Am8xKEYCm

In this late-game possession, you see three Heat defenders involved in the central action captivated by DeRozan, with Alex Caruso's slip providing a distraction. Vucevic gets an easy look as a result.

Here are some more examples of DeRozan appearing to settle into a scoring mindset before making a great pass. Shoutout to Ayo Dosunmu on converting some of these. I also tossed in one additional impressive drop-off dime to Vucevic:

All of this is to say that DeMar DeRozan is leaning more into his strengths, improving a major weakness, and coming off of an All-NBA Second Team campaign in his first year with a new team. But many people, myself included, did not have him as a preseason pick to run it back.

Remind me why he can't?

Noah Vonleh had six screen assists in just over 20 minutes last night — one less than Joel Embiid, who played over 37 minutes.

6.0 per game won’t last, but for context, that would have ranked 2nd in the NBA last season.