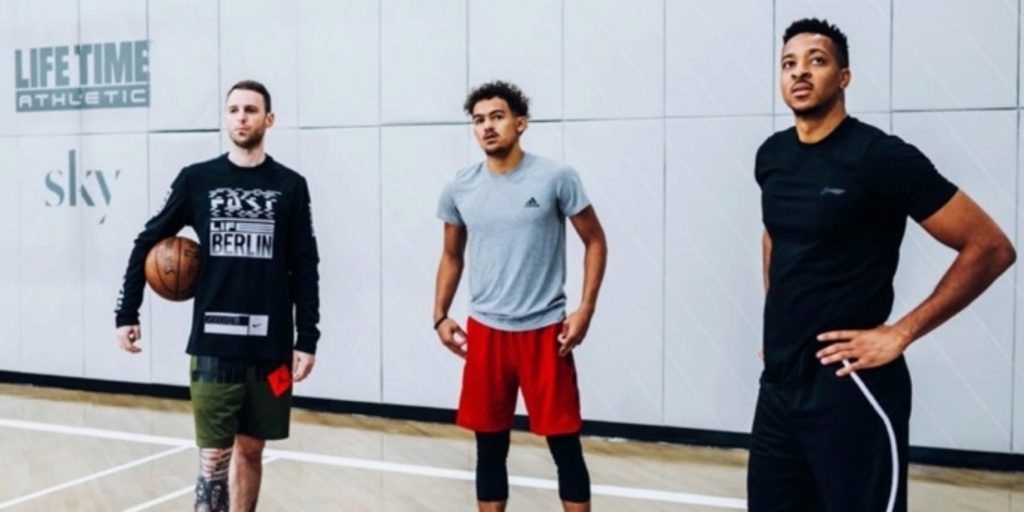 NBA skills coach Chris Brickley: 'My goal is to be the biggest trainer in the game'

Brickley was a walk-on at the University of Louisville who then made the transition to coaching. After working as an assistant coach at the college level for several years, he joined the New York Knicks as their director of player personnel. Since leaving the Knicks to train players individually, Brickley has become one of the biggest basketball influencers in the world, with over 1 million followers on Instagram and his own ESPN+ show (“Declared”). He’s also a brand ambassador for a number of companies such as PUMA, Lids and, now, BODYARMOR.

BasketballNews.com caught up with Brickley to talk about his career, his famous pick-up games, his stint with the Knicks, his BODYARMOR partnership and much more.

You were the New York Knicks’ director of player personnel before leaving to train players independently. How is your job different when you’re running your own training business versus working for an NBA team?

Chris Brickley: I would say that being part of a team, the goal is to win games. You have players come in and out. I was with the Knicks for a few years and we went through 40-to-50 different players. Now, having my own business and doing the training, I know I’m going to have [the same player] - whether it’s Donovan Mitchell or whoever - for five, six, seven years. It’s kind of like a long-term thing and you’re really invested in these players. They’re not going to get traded and you don’t have to worry about contracts and stuff; I’m just worried about getting them better. That’s kind of what I like to do at this point, just lock in with the player and build a relationship with them and develop their game… I just stay locked in to what I do. I wake up in the morning, I talk to the players, I watch games, I do what I need to do in terms of my partnerships, I go to sleep and then it repeats.

Would you be open to working for an NBA team again if the circumstances are right?

Brickley: Yeah, maybe in the future. Right now, I’m super happy where I’m at. But maybe down the line. I wouldn’t X it out.

Fans don’t get a chance to see most of these offseason workouts aside from a few clips on social media, so what are some of the biggest misconceptions about NBA training and the work that players put in?

Brickley: You don’t necessarily expect people to know how hard these guys work; they aren’t going to brag about it. But for sure, to be in the NBA and especially to be successful in the NBA, you need to have a different type of work ethic. It’s not just playing games. It’s not just doing workouts either. It’s watching film, it’s what you take, it’s what you drink. For example, this BODYARMOR partnership that we’re about to announce, what these guys put in their body [matters]. It’s about being mindful in every single thing that you do - from drinking the right thing to eating the right thing to watching enough film to doing recovery and so on. It’s much more than just basketball. 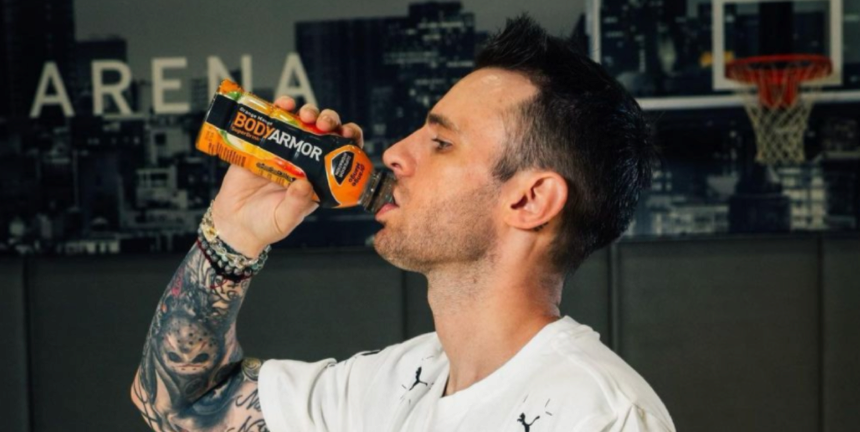 How did the BODYARMOR partnership come together?

Brickley: I’m super excited about it. I think it just makes sense since BODYARMOR is kind of on the rise as a company. They’ve been on the rise; they have everybody from Donovan Mitchell to James Harden to Trae Young - it’s a really good roster of guys. I’d like to think that my company and what I’m trying to build is on the rise too. We’re both grinding to become the best in our fields. I know one of BODYARMOR’s goals is, by 2025, to be the biggest sports drink in the game. For me, my goal is to be the biggest trainer in the game. It made sense and I’ve always been a big fan of BODYARMOR and I’ve always drank it, so it’s very organic.

What advice would you give to aspiring trainers?

Brickley: That’s a good question. First, you need to be passionate about the game of basketball. You have to be willing to understand that you might work for 10 years and not make much money. Things might not really get moving [for a while], so you have to be willing to make sacrifices. You have to be willing to sacrifice your time, sacrifice going out and partying, and things like that. Because, first and foremost, if you want to be a trainer, you need to put your time toward your players. If you don’t have any players, how are you going to be a trainer? So you need to dedicate your time to the players and show the players that you’re always there for them any time. Do they want to watch film late at night? Do they want to work out early in the morning? Whatever time they want to watch film or work out, I’m going to be ready. It’s just a big sacrifice. And you won’t see results for a while. That’s something that I’d want to explain to a young trainer: Don’t think that you’re going to sign deals or get rich or anything like that, just be in it for the love of the game.

You’re basically on call 24/7. You’ve talked about how Carmelo Anthony sometimes wants to work out at 2 a.m. and you never say no. Do guys often reach out in the middle of the night? And what is that like, being on call all day and night?

Brickley: Yeah, all the time. Living where the gym is, it’s a good thing and it’s a bad thing. Guys know that [I’m always there]. Sometimes, guys will be on the road during the season  - especially pre-quarantine - and they might play the Knicks or the Nets the next night and while they’re in town, they want to get some work in at my gym in New York City, at The Summit.

I read that you and Carmelo got close because you would give him honest feedback and constructive criticism after games. I feel like a lot of stars appreciate that since most people in their life won’t say those things. How has that honesty helped your relationships with players?

Brickley: I think you need to be, I think that’s how the relationship builds. There’s no relationship that’s based off of, “Hey, good job! You’re the man! Good job! Good job!” You’re never going to build an organic relationship like that. I think you need to give constructive criticism and you need to explain to them what the real deal is. Like, “You didn’t play as hard as you should’ve tonight,” or maybe, “You need to work on your pull-up off the left and work on finishing with the right.” You can’t just start the relationship like that, obviously, but as you get closer to someone [you can be honest]. That’s what I do, and I think giving constructive criticism works. It shows them that you’re paying attention and that you want to help them get better as a person and as a player, and I think they take a liking to that. And that’s when you can get to work.

You’re known for having star-studded pick-up games in your gym. What’s the craziest pick-up game you’ve witnessed? Is there a certain game that stands out?

Brickley: Yeah, I’ve had a few legendary ones. When COVID isn’t in the way, there are legendary ones every summer. If I had to pick, I’d go with this one from 2017. KD had just won [the championship] and he beat LeBron. That happened and then literally two months after that series, LeBron and KD flew in and they played against each other. They were guarding each other, picking each other up full-court. There was a whole bunch of tension in the gym because they literally just got done playing against each other for the championship, and now they were playing in this private run against each other. That’s something I’ll never forget. There were like 15 NBA guys there: Melo, J.R. Smith (who was also playing in that series), Enes Kanter (who, at the time, had beef with KD), Hamidou Diallo (who was in college at the time). There were all types of funny storylines.

An incredible run today. One of the best open runs of all time? You decide. #AcademyBasketball #RelentlessPursuit pic.twitter.com/bNeHpgG11r

Brickley: Yeah, especially because for big men, the game has changed. The game has evolved even since I was coaching in the NBA. It’s tough to be a big man who just catches the ball on the block and turns and shoots. If that type of game was in, then Enes Kanter would be an All-Star since he’s shooting like 60%. That’s just not how the game is now. You need to be able to dribble a little bit and shoot threes and pick-and-pop and knock down mid-range shots. It’s rare to see teams dribble down and throw the ball into the post; nobody really plays through the post now. Being a big - a real big, a seven-footer - you need to develop a little more [than other positions]. You might be really good at rebounding or you might be really good defensively - there might be one thing that you’re really good at - but it’s rare for a big to come into the league being able to shoot the three, dribble (for dribble handoffs), finish around the rim and play defense. As a big, you need to do a whole bunch of things, so I think it always takes some time.

Yeah, someone like Kanter would’ve been dominant 20-30 years ago.

You have a bunch of players who work hard, but is there a certain player who has really impressed you with their work ethic and hunger to improve? Is there anyone specific who stands out?

Brickley: Off the top of my head, I would have to say Donovan Mitchell, who’s also with BODYARMOR. I’ve worked with him since, shoot, 2015. I worked with him back in his college days and just to see his [improvement]... People were like, “He might go first round, he might go second round; we don’t know.” I saw him work through that and then have an amazing rookie year and still continue to work out at 6 a.m. every morning. Then, he comes back and has another great year and he’s back in the summer and still wants to work out at 6 a.m. every morning. Then, he becomes an NBA All-Star! Through all of these amazing things that he’s done, he hasn’t lost an ounce of motivation. When the offseason comes, he’s texting me, “Ready to go at 5 a.m.? Ready to go at 6 a.m.?” His work ethic is crazy. When I see that he’s an All-Star and has his own sneaker and has his deal with BODYARMOR, it just makes sense. He deserves it all.

What are your thoughts on how Donovan and the Jazz have played this season? It’s been pretty incredible.

Brickley: I think he’s playing great, and they have the best record in the league. I think [credit] goes to their coaching and Donovan’s leadership, and the way they play - the way they move the ball, the way they play defense. It seems like they’re playing faster this year. It’s going to be interesting once the playoffs come because there are a bunch of really good teams. Right now, the Jazz look really good.