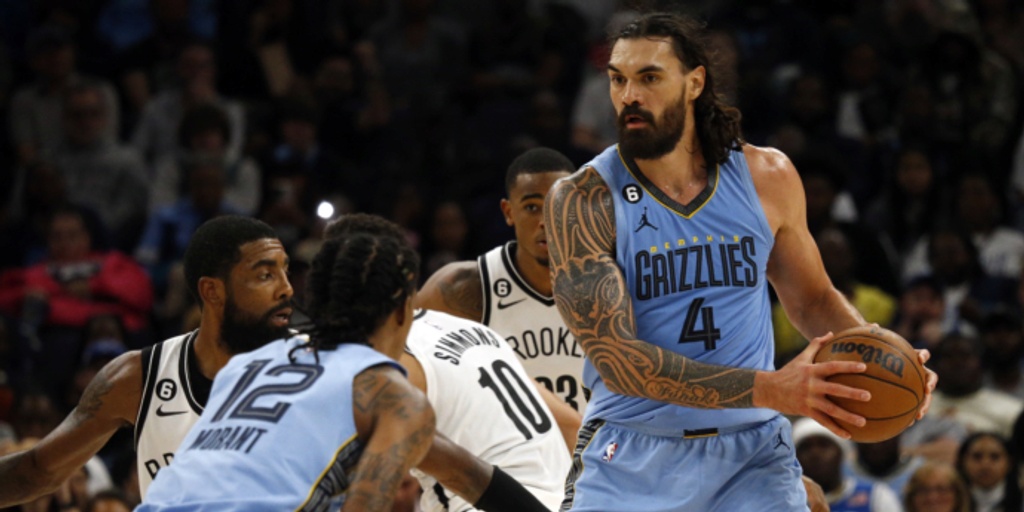 Let’s get into it.

*All stats are through games played on October 29.*

BIG OF THE WEEK: STEVEN ADAMS

Assuming you’re not a student of the James Harden School of Internet Consumption (JHSIC), you’re likely aware of Ja Morant’s MVP-level tear to begin the season.

He’s once again living in the paint, making up finishing moves in midair. If that wasn’t enough, he now has the audacity to bomb away from three with blistering efficiency (56.5% on 4.6 attempts).

Morant is nearly impossible to deal with in his own right; his blend of speed, ball-handling, leaping ability and body control is frankly unfair. With an oak tree like Steven Adams clearing a runway, there really isn’t much you can do with him.

Among bigs who have set at least 75 on-ball picks, nobody has done a better job of laying down the law than Adams, connecting on 83.8% of his screens, per Second Spectrum. The Grizzlies have generated 1.04 points per possession (PPP) on trips featuring a Morant-Adams ball screen, one of the better marks in the league among high-volume pairings.

That value extends off the ball, with his partnership with Desmond Bane being especially fruitful (1.24 PPP). Oh, he’s generated contact on 75% of those screens too.

Adams may not get many buckets off his rolls, but he makes the Grizzlies better. Keep it up, big fella.

WE SEE YOU: AL HORFORD

We won't talk about the defense right now, but the Celtics have generally been fun offensively. They rank first by a decent margin in half-court offense (107.5 ORTG), according to the good folks at Cleaning The Glass.

The off-ball movement of this group has hit differently since the turn of the calendar. With Jayson Tatum and Jaylen Brown both comfortable attacking off screens, the Celtics often opt to have one — or somtimes both of them at the same time — coming off pindowns from the corner.

If you're watching a Celtic game and see that setup developing, keep an eye on the side with Al Horford on it. He gets wide and sturdy, consistently prying guys open for shots or drives.

SMALL OF THE WEEK: FRED VANVLEET

If the Raptors need a half-court bucket — which is pretty often, considering they rank 26th in half-court offense right now — you can expect them to turn to Pascal Siakam. And if they need want to torture defenses in the process, they'll have Fred VanVleet set a screen for Siakam.

The benefits are obvious. You generally don't want to switch your point guards onto a mid-post bully like Siakam. If you're caught trying to stay attached, you run the risk of opening a driving window for Siakam, a three-point window for VanVleet or an open shot for someone else while you try to recover.

A quick stat: the Raptors are generating a blistering 1.28 PPP on trips featuring a Siakam-VanVleet ball screen. There really isn't much you can do against it.

YOU SHOULD HAVE THE FACILITIES FOR THIS, BIG MAN: ANTHONY DAVIS

There's an argument to be made that grace should be afforded here. Anthony Davis has once again been dealing with body ailments, and it isn't like there's a ton of space to roll into within the Lakers' half-court offense.

But, man, some of the whiffs or lapses in effort are pretty loud, even with that context.

I only went with three clips. You can find others elsewhere. He's connected on less than half of his on-ball picks (47.7%) to this point of the season. He needs help going off in this context, but he has to help himself at a certain point. Commit to getting guys downhill and see what may open up.

WE SEE YOU, TOO: ALEKSEJ POKUSEVSKI, MYLES TURNER

Poku, brother, I beg. We understand you're a slight guy, but at least pretend to set an angle and give your guards something to work with. Getting in the pocket doesn't mean as much if the ball-handler's defender doesn't have to think about you at all.

Among 53 players to set at least 70 on-ball picks, Pokusevski ranks 52nd in the percentage of screens he generates contact on (41.7%). It simply won't do, especially if the Thunder actually want to sprinkle in some Poku-at-5 minutes.

I'm giving a little grace because he's has only played two games this season. I emphasize "little" here, because this is a multi-year trend with him. There's a thin line between slipping a screen to keep the defense off balance or honest, and slipping because you want the back — and leaving your ball-handler out to dry in the process.

It's only been a couple of games, but these aren't the reps you want to see to kick off the year.

Screen Time will be back next Saturday!