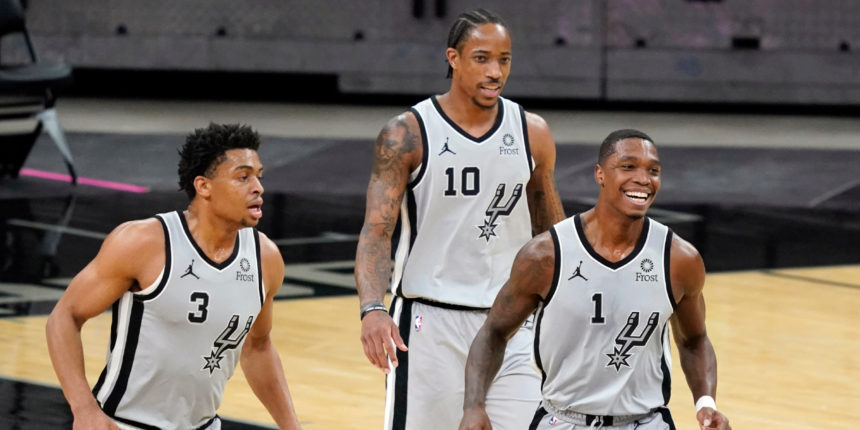 Spurs' veterans, young core getting it done together

Don’t look now, but the San Antonio Spurs are doing it again.

You know, the thing where they outperform certain expectations and cement themselves in the playoff picture despite the assumption that the team is fading into obscurity in a crowded Western Conference. Yeah, that.

In what was essentially a stopgap campaign in 2019-20, head coach Gregg Popovich leaned heavily on his veterans to carry much of the load.

Dejounte Murray was playing in his first full season since suffering a torn ACL, Derrick White had to adjust from being the lead point guard with Murray sidelined to adapting when he returned. Meanwhile, Lonnie Walker showed flashes of brilliance, yet not enough to earn Pop’s trust until last year’s closing moments. To top it off, Keldon Johnson spent the majority of his rookie campaign in Austin with the team’s G League affiliate.

Long story short, DeMar DeRozan, LaMarcus Aldridge, Patty Mills, Rudy Gay and Co. played a lot of minutes and, although scoring wasn’t much of an issue, the team’s defense was not up to par at all; the Spurs had the 26th-ranked defense in the league, allowing 110.9 points per 100 possessions. So, for the first time in over two decades, San Antonio didn’t take part in the NBA postseason. Rumors soon followed that the seasoned DeRozan and Aldridge were trade targets for teams looking for their final pieces to the puzzle, and that Pop and his staff would likely turn their focus toward the youth movement.

But to this point, the Spurs have basically said, 'Why can’t we utilize the strengths of both our veterans and our young core?' DeRozan is respected as a bucket-getter, but have you seen his passing lately? It really started during his final season in Toronto; however, finding his teammates and setting them up have become second nature for the veteran swingman. There’s been a real, steady progression; DeRozan has gone from being a rookie with the lowest assist percentage (4.3) at his position to a veteran ranked in the 100th percentile using the same criteria (29.5) during his 12th season, per Cleaning The Glass. It’s been extremely evident through San Antonio’s first 17 games that he is the team’s primary playmaker (not to mention he’s taking care of the basketball). He’s still pretty clutch too, guys!

Aldridge’s numbers aren’t the sexiest. First, we have to accept the fact that he’s 35 years old, and Father Time comes for everybody in this league that isn’t named LeBron James. Second, it doesn’t mean he can’t pop off for 30 on any night; it’s not like he’s depended on athleticism to hit his backdown fadeaways on the baseline this whole time. His usage has taken a hit, as have his minutes, which should sit fine considering the ascension of San Antonio’s future.

Murray is a stud, and he should be for a long time coming. He has had his shooting issues, but that’s okay because he’s been willing to take those shots, and that’s not where he makes his money anyways. He does it in transition, after he steals your lunch, as he did to Kemba Walker and Jamal Murray in crunch time this past week. Murray also loves driving to the cup and/or spraying out from that depending on what defenses give him. He’s a ridiculously good passer in his own right, as well. And we’re not even going into full detail on his rebounding or his defensive prowess on the perimeter, against the pick-and-roll or even in some isolation situations -- he won’t give an inch.

Maybe the brightest development of the season in San Antonio has been the quick learning of second-year wing Keldon Johnson. You want to talk about being unafraid of the jump? The 21-year-old played 17 games last season and has started in each of the 19 contests in the current campaign. He’s leading the Spurs in rebounding average and taking the second-most field goal attempts, and playing 30 minutes a game as a sophomore in a first-year type of situation. Metrics don’t quite support Johnson’s contributions as a defender; it might have to do with his overaggressive tendencies (2.7 fouls per game) and the fact that a veteran like Gay is just more sound and advanced with his 14 years of experience. (Mills is also included on that fellow-vet list; what a job those two have done off the bench, by the way).

Walker has room to grow as well, even though he is clearly maturing as a player within the team structure. Pop’s gotten him to put up more shots beyond the arc and he’s knocking them down. We’ve gotten this far without mentioning Jakob Poeltl, who is quickly becoming a shot-altering machine and really has been the best in that department behind only the NBA’s block leader, Myles Turner. And first-round draft pick Devin Vassell’s been there for an elbow three when San Antonio’s needed one. There was a bit of good news regarding White’s return Saturday night vs. the Memphis Grizzlies, which should provide even more optimism for a group showing plenty of promise.

The Spurs really are a team in every sense of the word. It goes from Pop’s coaching staff (shout out to future head coach Becky Hammon) all the way down to the players, each of whom has affected a positive outcome one way or another.

And that applies to both the vets and the youngins.