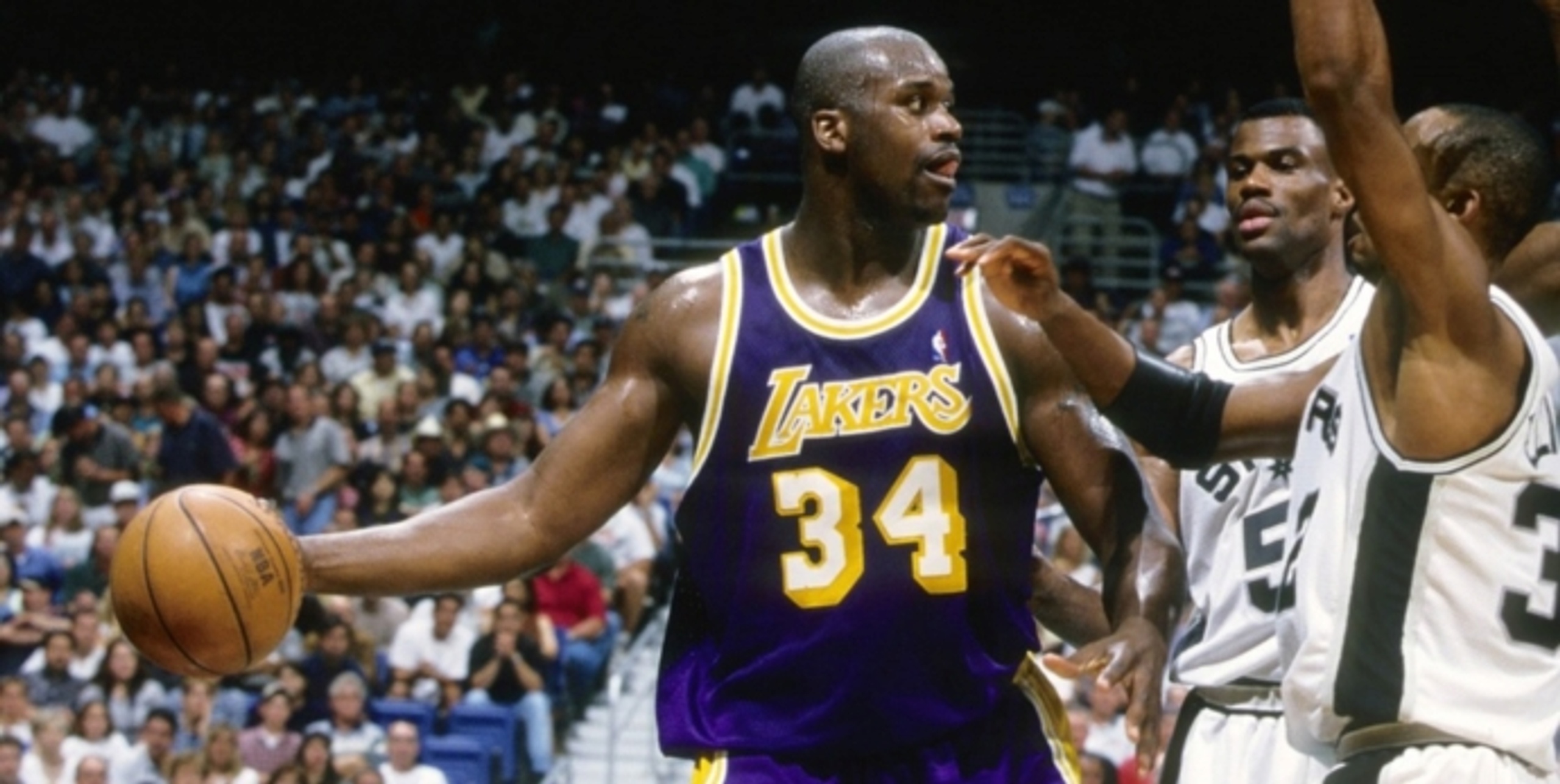 'He offered to pay for my dad's funeral': Why Shaq is best star teammate ever

Jeff Pearlman is the New York Times best-selling author of “Three-Ring Circus: Kobe, Shaq, Phil and the Crazy Years of the Lakers Dynasty," which is on sale now.

When the Los Angeles Lakers selected A.C. Green out of Oregon State with the No. 23 pick of the 1985 NBA Draft, he was greeted by new teammates with the cackles and guffaws of men excited to welcome into their midst a real-life, all-American virgin.

Or, put differently, they decided to give him hell.

Within Green’s first month with the team, the question, “Are you really a virgin?” was asked about 500 different times, 500 different ways. One Laker literally took bets on how long it would take for Green’s deflowering, and a hat was passed around the bus. Nary an opportunity would pass when a player wouldn’t try to temp ol’ A.C. with a chance to get laid.

It was also cruel.

Fifteen years later, the Lakers once again used a late first-round pick on a devoutly religious West Coast power forward. This time it was Mark Madsen of Stanford, who came to La-La Land a couple of years removed from a Mormon mission to Spain. He was aw-shucks and golly-gee and ripe for the A.C. Green treatment.

Then, he was greeted by a man who has to be the best superstar teammate in the history of professional sports.

First, Shaquille O’Neal escorted the rookie on a spree.

“He took me car shopping,” Madsen recalled. “He literally said to me, ‘I’m putting the down payment on whatever car you want.’ I told him I wouldn’t let him, but he negotiated a great deal for me on a Chevy Tahoe.” The next stop was clothing shopping at a big-and-tall store in Beverly Hills, where O’Neal unloaded $2,500 on jeans and Italian sweaters.

Shaq began sitting next to Madsen on flights. He asked about Mormonism, about missions, about Madsen’s goals and dreams and hopes.

Then, he got to work as Madsen’s pimp.

When the Lakers flew from city to city, Shaq made certain to ask most of the flight attendants, “Are you Mormon?” Once, while walking through the team’s offices, Madsen was approached by an employee who was young and single.

“The most interesting thing happened last night,” she told him. “I’m sitting in a restaurant in Redondo Beach and Shaq was in there asking some of the girls if they were Mormon because if they were, he wanted to set them up with you.”

O’Neal, according to a former Laker guard named Mike Penberthy, was the equivalent of having “a big brother with a huge bank account.” When Penberthy arrived for his 2001 Laker debut wearing a suit jacket from Banana Republic, O’Neal pulled him aside. “You don’t have any suits, do you?” he said quietly, so as not to embarrass the rookie.

The following morning, the center from LSU picked up the guard from Master’s College and brought him to his personal tailor. He paid for six suits.

“When my father died, Shaq offered to pay for the funeral,” Penberthy said. “He’s that type of guy.”

In the course of his 19-year NBA career, O’Neal could be egomaniacal, ornery, moody, cruel. He would do things, on occasion, that caused other players to cringe, shrug and moan. Once, in a fit of agitation, he placed a wad of used toilet paper in someone’s shoe. Another time, engaged after a dispute, he dragged Brian Shaw across the locker room floor. Devean George, Laker forward and chronic softie, still likely has some scars from being duct taped naked to a court. 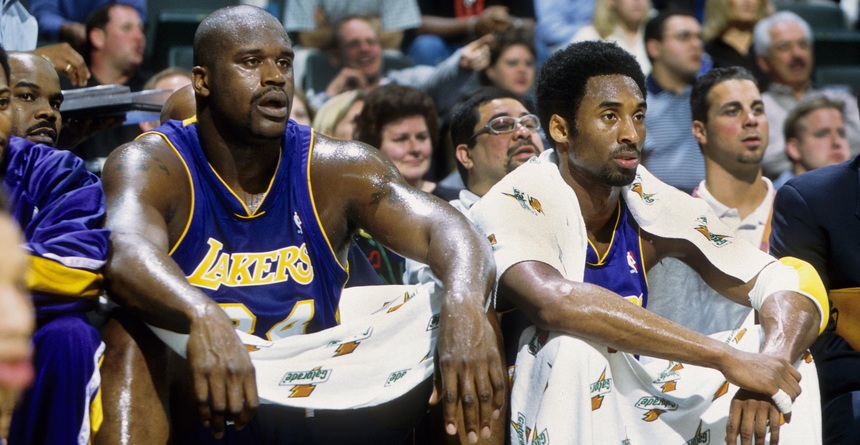 But mostly, he was a man who aspired to be loved and admired, who felt the pain of others’ unhappiness and wanted to make certain your day was as good as his. When people speak of the famously combative relationship between O’Neal and Kobe Bryant, often misunderstood is the root. It wasn’t so much that Bryant was arrogant and self-centered. No, it was that he showed no interest in O’Neal’s embrace.

Shaq wanted to be Bryant’s big brother. Bryant had two sisters, and that was enough. Shaq wanted to be Batman to Bryant’s Robin. Bryant didn’t care for comic books — and if anyone was going to be Batman, it was him. As simplistic as it sounds, this bruised O’Neal’s feelings. He was sensitive to a fault; oddly passive aggressive and gentle. When, on one occasion, he took many of the Lakers out for a fancy seafood dinner, and Bryant passed, the sting itched. When Bryant later arrived at the restaurant, book tucked beneath arm, and found his own table, it burned. No, it hurt.

Before long, O’Neal silently anointed himself the protector of younger players — a guardian against Bryant’s notoriously poor mistreatment of lightly regarded free agents and rookies.

Heading into 2003 training camp, the Lakers signed former Kansas center Eric Chenowith to fight for the job as O’Neal’s backup. He was a journeyman in the classic sense — a one-time New York Knicks second-round pick who bounced from team to team. Never sticking.

Not long after inking his contract, Chenowith received an engraved-in-marble invitation, via mail, that read: ERIC CHENOWITH—SHAQUILLE O’NEAL CORDIALLY INVITES YOU TO HIS HOME TO WELCOME NEW TEAMMATES. Upon arriving, he was embraced by O’Neal, who guided him to the rear of his home and toward a group of Cubans rolling cigars. “Bro,” O’Neal said, “Make sure and take some home for a friend.”

Chenowith was blown away. A few weeks later, while in camp, Bryant ordered him to fetch an ice cream. It was awkward and uncomfortable, and Chenowith felt inches tall.

Then, a whisper from behind.

Of course he did.