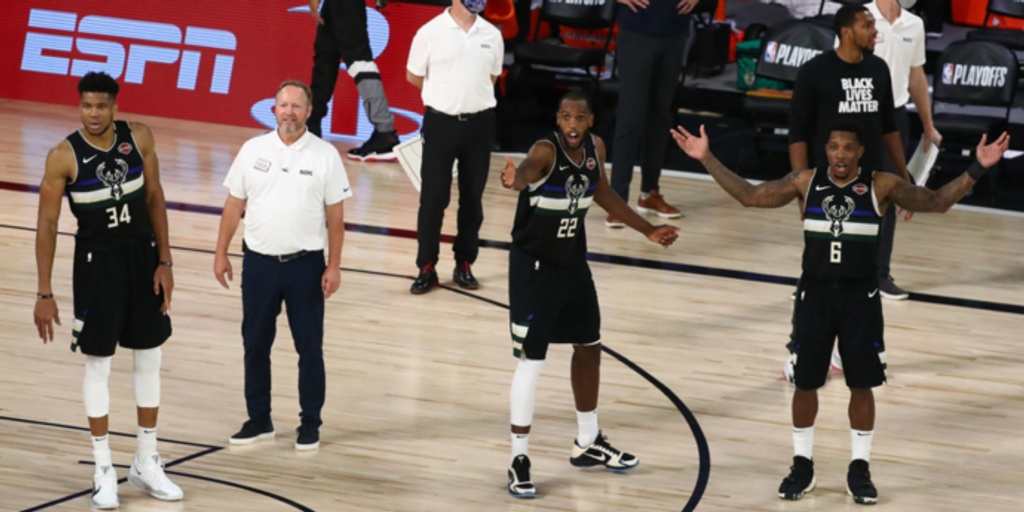 Where will Khris Middleton play next season? It might not be Milwaukee.

That is my personal opinion, but it is based upon conversations I have been having for the past several days with folks I know and trust. Disbelieve it if you want, but look at the facts.

The Bucks flamed out. Khris Middleton was not all that good in the postseason. And in order for Milwaukee to have a team capable of defeating the no-quit Miami Heat, the soon-to-be-healthy Brooklyn Nets, Doc Rivers’ Philadelphia 76ers and every other team in the East that is going to try to improve, the Bucks’ roster has to improve too.

This coming NBA offseason has thousands of unknowns, including whether Giannis Antetokounmpo will sign a super-max extension with the Milwaukee Bucks. He wants changes to the roster, one of which, the acquisition of Chris Paul, is a virtual impossibility.

But another change, dealing Middleton, is something the Bucks may take a long hard look at.

It is an open secret in the NBA that the Bucks are going to try to trade Eric Bledsoe, although no current trade discussions are taking place, a league source said on Thursday. What needs to be discussed in the days and weeks ahead is whether moving Middleton for a more proven playoff performer needs to happen, too.

Middleton didn’t perform particularly well in the playoffs, as the Bucks lost to the Miami Heat 4-1 in the second round. What happens next is critical. Although Antetokounmpo and Middleton are close friends, the two-time MVP wants to win a championship and believes roster upgrades are necessary. However, he hasn’t named specific players that he wants to see replaced.

Trade speculation about Bledsoe has been reported elsewhere, but the same cannot be said for Middleton, who is owed $146 million over the next four years. Middleton has not played well in each of the past two postseasons, as Milwaukee lost a 2-0 lead in the 2019 Eastern Conference Finals against Toronto and then got knocked out this year in five games by Miami.

While the Bucks are kicking the tires on just about every potential move, it’s difficult to find a player with a comparable salary who would appeal to Milwaukee. Middleton is due to make $33.051 million next season, roughly the same number as the following players who theoretically could be available: Tobias Harris, 76ers ($32.7 million); Kevin Love, Cavaliers ($28.9 million), Al Horford, 76ers ($28 million), DeMar DeRozan, Spurs (27.7 million); Andrew Wiggins, Warriors ($27.5 million), and LaMarcus Aldridge, Spurs ($26 million) among others.

If you are the Bucks, do any of those players appeal to you? In my opinion, only one of them does: Love, if he’s at full strength.

Love is three years older than Middleton and has played in 63 career postseason games, going to the NBA Finals three times. He is under contract for three more seasons, making $31.2 million each of the next two seasons and $28.9 million in 2022-23.

Whether Cleveland would be open to such a swap is unknown, but Middleton has been an All-Star each of the past two seasons, and the Cavs are now building around Andre Drummond, Collin Sexton, Darius Garland, Kevin Porter Jr. and an assortment of young players that soon will include the No. 5 pick in the draft. They had nine double-figure scorers last season, but nobody averaging the type of point production that Middleton is capable of.

Another upgrade option that the Bucks have to ponder is Jrue Holiday of New Orleans, who has been the subject of numerous trade rumors involving the Pelicans, who are changing coaches and looking to build around Zion Williamson, Lonzo Ball and this past season's Most Improved Player, Brandon Ingram. Holiday was recently selected by his peers as the NBA's Teammate of the Year, a testament to his value in the locker room.

Pelicans general manager David Griffin has only $83 million in committed salary for next season with Derrick Favors and E’Twaun Moore coming off the cap, so a potential deal with the Bucks would not have to include matching salaries.

Combining the salaries of Middleton and Wesley Matthews ($2.56 million this season, with a player option for $2.69 million next season) would enable the Bucks to bring back a second player who could replace Matthews as a perimeter defensive specialist. That could happen through a trade or through free agency. They can use up to $5.8 million of the mid-level exception, but going above that number would make them hard-capped.

It can safely be said that no team aside from the Los Angeles Clippers had a more disappointing finish to the season than the Bucks, and standing pat with the same roster would not seem to be an option.
Antetokounmpo and the Bucks have to adjust their roster to defeat the Heat, who will be playing in Game 6 of the NBA Finals tomorrow night.

Antetokounmpo missed the final game against Miami because of a right-ankle injury, and his supporting cast underperformed. Middleton shot below 40 percent during the postseason while averaging 20.3 points, and Bledsoe averaged only 11.7 points and 5.7 assists in nine games, shooting 38.8 percent from the field.

The second-round exit has led to speculation that Antetokounmpo will turn down the $254 million super-max extension and bolt for a different market, and Milwaukee’s front office is expected to be proactive in scouring the league for upgrades. Based upon that assumption, Bledsoe (owed more than $54 million over the next three years) and Middleton (owed $147 million over the next four seasons) would be the most likely candidates to be dealt, with Middleton having the higher trade value.

Acquiring Paul from the Oklahoma City Thunder would be extraordinarily difficult, given the two years and $85.6 million remaining on CP3’s contract. The only way a deal could be made would be through a third team that has major salary cap space (Atlanta, Detroit and New York have the most), but that is still very unlikely -- even with ownership telling Giannis that the team is willing to pay the luxury tax in order to keep the two-time MVP in Milwaukee. Giannis and Paul became close in the NBA bubble (particularly during the Bucks’ boycott), which is where this chatter originated.

The answer to many of the questions concerning the NBA is dependent upon what happens with the coronavirus pandemic, but starting the season in January (at earliest) now seems to be a virtual certainty, according to NBPA director Michele Roberts, who has been inside the NBA bubble since July.

”Even before COVID happened, there was a conversation about starting our season later. Why compete with football in the fall? Why don’t we start our season around Christmas? It may very well be that our regular schedule is going to change, not so much because of COVID, but because of the ability to experiment. I wouldn’t bet on returning to the old normal,” Roberts told The Athletic, noting that projections of $8 billion in revenue for the 2020-21 season are expected to come up 40 percent short.

So the league and the Players' Association must first figure out what the salary cap will be next season, along with when the season will start and whether fans will be allowed into arenas. That is the reason why the Bucks are not actively trying to trade Bledsoe. They are in a holding pattern, like every other NBA team.

It was curious to see that Antetokounmpo unfollowed all of his Bucks teammates on Instagram after they were eliminated, and it would have been nice to be a fly on the wall for Antetokounmpo’s three-hour lunch with owner Marc Lasry before he returned to Greece.

Here is the big thing for the Bucks: When you lose, you make changes. And when you want a super-max-eligible superstar to stay, you try to put the best players around him.

Without any changes, Antetokounmpo may elect to play out his contract, after which suitors will tell him that even though he likes Milwaukee and does not care about playing in a major market, the caliber of teammates he wants to play alongside do care about those off-court factors. Milwaukee is not an attractive city for the majority of NBA players, so making the best trade(s) is just about the only option general manager Jon Horst has in order to keep Giannis with the Bucks for the next six seasons.

Also, Antetokounmpo is not the type of person to get overly specific when he requests changes. He is counting on Bucks management to be able to read his mind to a certain degree, so do not expect him to say anything publicly about Middleton, Bledsoe or anyone else on the Bucks.

But Milwaukee needs a second decision-maker and another outside shooter who can also defend on the perimeter, and it will be up to Horst to decide whether to keep Middleton or find a better fit.

If he doesn’t, Antetokounmpo can turn down the super-max and keep his options open. And the Bucks want to avoid that at all costs.

Stay tuned, but do not expect Milwaukee to stand pat. They were a combined 2-6 against Miami in the regular season and the playoffs. They need to get better, and a change at point guard is probably not the only thing they need. Middleton is their best trade asset, and I do not think he’ll be around when next season starts. We shall see.