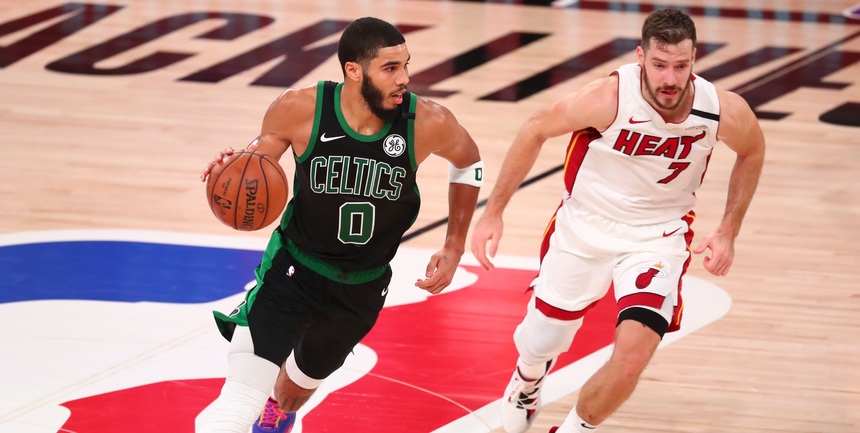 Jayson Tatum and the Boston Celtics clearly are not ready to see the world that exists outside the NBA’s restart bubble.

And a big second half extended their stay at Walt Disney World.

Tatum had 31 points and 10 rebounds, Jaylen Brown added 28 points and the Celtics staved off elimination by topping the Miami Heat 121-108 in Game 5 of the Eastern Conference finals on Friday night.

Daniel Theis had 15 points and 13 rebounds for the Celtics, who trailed by 12 early but took control with a big third quarter. Kemba Walker scored 15 points, Marcus Smart added 12 and Gordon Hayward had 10 for the Celtics.

Goran Dragic scored 23 points before fouling out with 4:27 left for Miami, which got 20 from Duncan Robinson. Jimmy Butler scored 17, Tyler Herro and Jae Crowder each had 14 and Bam Adebayo 13 for the Heat — which could get nothing to fall from 3-point range.

He turned a blew a kiss to the Heat bench after the second one, reminiscent of something Herro did during his 37-point barrage in Game 4.

The opening minutes didn’t go according to plan for Boston, which missed 11 of its first 12 shots, committed four turnovers in that dismal stretch to make matters even worse, and got into a 17-5 hole very early.

But they weathered all that and, even after shooting only 40% in the first half, Boston trailed 58-51 at the break — never leading, but never letting Miami get too far removed from view.

The Heat scored the first basket of the third quarter. The next few minutes were all Celtics.

“In all sincerity, first time I’ve seen Celtics basketball in the last few games,” Stevens told his team during a time-out.

And it was good enough to ensure that Friday wouldn’t be the last time he’d see Celtics basketball this season.

Celtics: Not that any of this should count on a neutral floor, but Boston ended what officially goes down as a five-game “home” losing streak. ... The Celtics are 2-0 when facing elimination games this season. The last time Boston won multiple elimination games in the same season was 2008, when it prevailed in first- and second-round Game 7’s and going on to win the NBA title.

This was the 18th playoff game in Celtics history where they scored at least 41 points in a quarter — and probably not surprisingly, they’re 18-0 in those games. It has happened in 20 different quarters; they did it in three separate quarters in a 157-128 win over the Knicks on April 28, 1990.

The only other time Miami allowed 41 points in a postseason quarter was June 10, 2014, when the Heat were outscored 41-25 in the first quarter of Game 3 of that season’s NBA Finals against San Antonio. Coincidentally, Friday’s third-quarter debacle had the same score: 41-25.