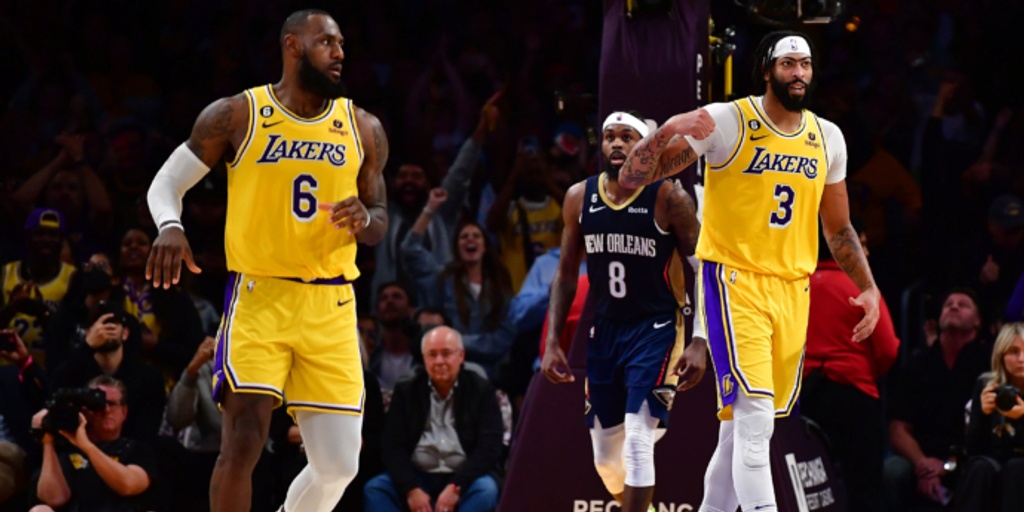 Making 5 predictions for the Los Angeles Lakers in 2023

The Los Angeles Lakers franchise never seems to have a dull moment, and you can bet the roller coaster will continue in 2023.

With another year gone by and 2022 officially in the rearview mirror, it’s time for the purple and gold to look ahead. Similar to the seven trade scenarios we looked at in last week's article, I've decided to predict five things that could happen with the Lakers in the new year.

The Lakers season has been underwhelming so far, but LeBron has not been as he continues to play at an ultra-high level even in his 20th season. And now, he’s on the verge of making history by surpassing Kareem Abdul-Jabbar as the NBA’s all-time leading scorer.

The question wasn’t if he would break the record this season, but when. LeBron has stayed healthy for the most part this year (only missing a handful of games so far) and finds himself just 484 points away from Kareem's mark of 38,387.

If James' scoring binge continues — he’s averaging 36.6 points per game since Christmas, and Darvin Ham has said he will continue to ride him until Anthony Davis returns from injury — LeBron is going to top Kareem BEFORE the All-Star break.

Here are two dates to target, with both games at home:

The Lakers finally make a trade... just not the big one

Going back to before the season started, Lakers' fans have been clamoring for Rob Pelinka and the front office to make a deal. And while LA has talked to a lot of teams, the franchise has yet to pull the trigger.

That will change before the Feb. 9 trade deadline, but it won’t be that big, potential-game changer that some are hoping for.

The Lakers have been clinging onto their oh-so-precious, tradeable 2027 and 2029 first-round picks, and the team doesn’t seem anxious to include either in a deal at this point. Instead, they’d rather count on good returns for minimum-contract players like Dennis Schroder and Thomas Bryant, and the return of Anthony Davis before the end of January.

LA will do something, but it will be around the edges that will involve the expiring contract(s) of Kendrick Nunn ($5.2M) or Patrick Beverley ($13.0M) and some second-rounders. Think of Josh Richardson, Cam Reddish, or Mason Plumlee — players who can help now, but also are on expiring deals so the team can preserve its cap space and reset the repeater luxury tax (something owner Jeanie Buss loathes to continue paying).

The Lakers will get into the Play-in Tournament

Somehow, someway, this team will get into the postseason. Right now, LA sits at 17-21, but is just one game back of the sliding Utah Jazz — losers of five straight — for the 10th spot in the Western Conference.

The schedule is tough, and they'll need LeBron and Davis to stay/get healthy, but this group won’t melt down the stretch like last season; they’ll find an avenue into the Play-In. Maybe the Lakers could get as high as the No. 9 spot if things break their way, but that’s probably their ceiling at this point. From there, they’ll cross their fingers and toes that the LBJ-AD combo can do some damage. Good luck.

LeBron will remain with Lakers next season and beyond

Sure, LeBron is a bit frustrated with this season, and he already sounded off on his “playing basketball at this level just to be playing basketball is not in my DNA” salvo. And it’s not wrong to think that he could get fed up with the situation in La La Land and demand a trade after the season.

(Remember, he cannot be traded during the season because he signed an extension in September and cannot be moved for six months, which is after the trade deadline.)

LeBron has every right to be upset. Anyone would be, especially a 38-year-old, still-near-his-prime superstar who is chasing one more ring to tie him with Laker greats Kobe Bryant and Magic Johnson.

With that being said, he’s not going anywhere. His sons Bronny (18) and Bryce (15) are entrenched at Sierra Canyon High School, his off-the-court businesses have thrived since moving to California and his family really enjoys the west-coast lifestyle.

LeBron doesn’t seem interested in moving his family or being away from them during an NBA season. While he’ll continue to put pressure on the front office when it comes to the roster, the bet here is that he’s not going anywhere. Well, at least not for the next few seasons.

Nothing says “Lakers exceptionalism” like the team always looking to add another superstar. And unless the organization makes a trade taking on salary for future years (don’t hold your breath), LA is set to have around $30 million in cap space this upcoming offseason. That’s not enough to get a star on a max deal, but it could be enough to get a distressed one.

I give you Kyrie Irving.

While Irving has been a big part of the Brooklyn Nets turning their season around — now in the No. 3 position in the Eastern Conference at 25-13 — he’s a free agent at the end of the season, and the Nets would still have to make a commitment to him. That could come down to how far they go in the playoffs. Even then, Nets governor Joe Tsai and general Sean Marks could decide they’ve had enough of the Kyrie experience.

Of course, the Lakers wouldn’t shy away from Irving despite the off-court attention that comes with him. LA is desperate for another big name player. He’s probably a much better fit that Russell Westbrook. He definitely is a better long-range shooter. But will his actions off the court get him in trouble? That’s a big gamble for most teams.

The Lakers aren’t one of them. They embrace chaos. LeBron has reportedly already indicated he would welcome playing with Irving again, and the feeling seems mutual. Despite his sometimes jaw-dropping offensive talent, most teams will steer clear of him. That would allow the Lakers to offer him a good, but less-than-max deal of around two-years, $62M.

Is that enough for Irving? It might be the best deal he gets offered.