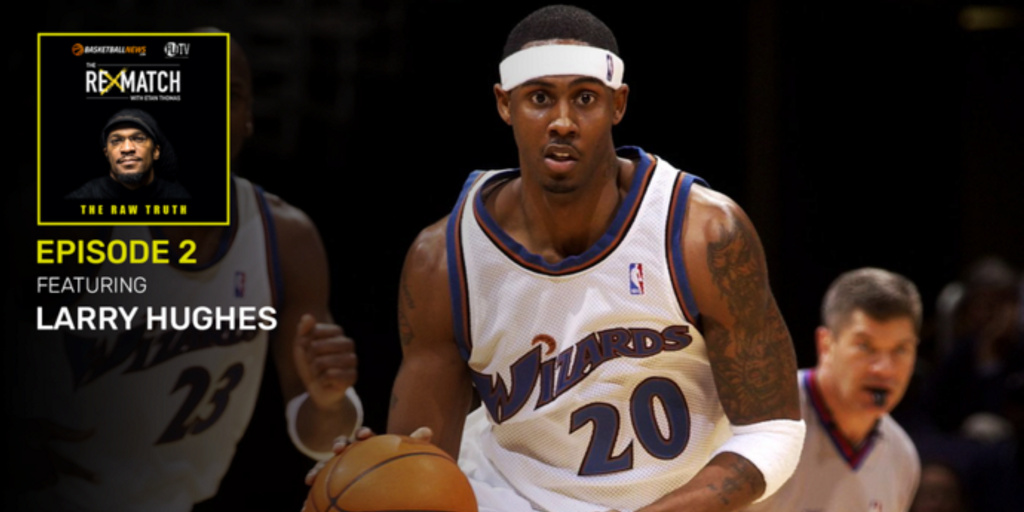 Larry Hughes on his bond with Gilbert Arenas, playing with LeBron, more

On this week's episode of "The Rematch," Etan Thomas is joined by 13-year NBA veteran Larry Hughes. They discuss Larry's NBA career, his special relationship with Gilbert Arenas, his stint playing alongside LeBron James on the Cleveland Cavaliers, why there are so few Black head coaches in the NBA, their time as teammates on the Washington Wizards, their experience playing with Michael Jordan and more. Time-stamps are below!

1:25: Etan and Larry talk about the relationship between LeBron James and Anthony Davis. They have great chemistry and they've said it's because there's no jealousy. What's the key to a strong basketball relationship? Why did Larry and Gilbert Arenas work so well together?

3:20: Larry talks about meeting Gilbert for the first time when they were on the Golden State Warriors (and Gilbert had just spent his entire NBA salary).

5:10: Like LeBron and AD, Larry and Gilbert weren't jealous of each other or competing with other.

6:55: Why do so many basketball relationships fail? What are the most common issues?

8:45: Can both players be Batman? Or do you need to have one Batman and one Robin in order for the duo to work?

9:40: Etan played with Larry and Gilbert in Washington, so he shares his thoughts on their relationship and how Larry seemed to have a calming effect on Gilbert.

12:25: Etan believes that Gilbert's gun incident wouldn't have happened if Larry was still in Washington.

13:20: Why did Larry leave the Wizards? Etan believes that GM Ernie Grunfeld didn't properly value Larry (and he made a low-ball offer).

16:20: Larry talks about playing with LeBron James in Cleveland and the relationship they had.

18:55: At that point, LeBron was 21 years old. Larry talks about witnessing LeBron's development.

20:10: The veterans in Cleveland were really supportive of LeBron and knew that he was the guy, even though he was really young.

22:40: Etan and Larry were in Washington when Michael Jordan and Jerry Stackhouse clashed. They discuss what went wrong with that duo.

23:20: Larry talks about playing with Jordan, and how MJ hired Doug Collins so that he could essentially run the team through Doug.

24:50: Etan and Larry talk about the lack of Black head coaches in the NBA today.

31:45: Some coaches (like Doug Collins) try to relate with the players, but it seems forced and not genuine.

37:20: Larry talks about the current Wizards team and what he expects to see from the John Wall/Brad Beal backcourt going forward.