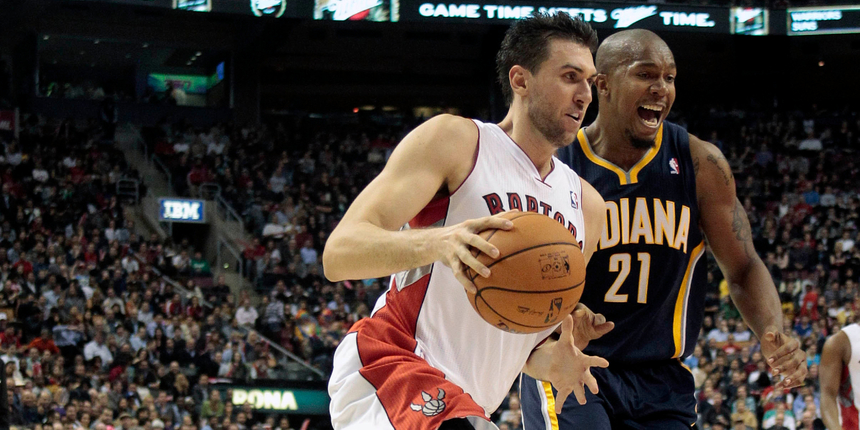 West: Bargnani, Bosh would 'blow this NBA out of the water'

Several former NBA players such as David West, Ryan Hollins and Etan Thomas recently appeared on BasketballNews.com's Virtual Watch Party for the NBA Finals. Among other topics, they discussed how today's NBA rules affect big men and how the Toronto Raptors' frontcourt of Andrea Bargnani and Chris Bosh was ahead of its time.

Ryan Hollins: "What do you guys think about this -- it's something that Ice Cube introduced with the Big 3. We played three-on-three and the big would get the ball against the guard, and they would literally put two hands on you, beat you up and take you out of bounds. You couldn't do nothing, so the big man was irrelevant in the Big 3. Cube actually changed the rules where you had to guard the big guys legitimately [and couldn't put both arms against them], or you could take advantage of the guards.

"I feel like the NBA, from a rules standpoint, penalizes the big man to where you got Jimmy Butler taking Dwight [Howard] out of bounds with two hands. That's a foul, and if we (big men) gotta guard on the perimeter, we [can't] put our hands on 'em -- we can't use any type of hands. So I think to bring the post game back, you have to call fouls. Because you can't touch James Harden, LeBron James and these guys on the perimeter; that's why they're so prolific. So you've got to give [Joel] Embiid and AD (Anthony Davis) and all those guys love, and they're gonna get back on the block. Because right now, it's a bad play."

Alex Kennedy (The Alex Kennedy Podcast): "It worked in the Big 3, too. You could see there were so many guys that became great post-up scorers and teams would go through the bigs way more often. And I agree that this is a problem in the NBA. When I covered Dwight Howard earlier in his career in Orlando, he would be covered in cuts and bruises after the game. He would just get beat up."

Cody Toppert (Memphis Tigers assistant coach): "The standard is completely different when they went to the freedom of movement rules. I think it definitely helps negate the big man's advantage."

David West: "I thought about this the other day. When [Andrea] Bargnani and [Chris] Bosh were in Toronto, the reason why that sh** didn't work is 'cause the NBA let us beat them up! We beat up Bargnani, they let us body Bosh. Like, Bosh and Bargnani right now, they would blow this NBA out of the water. They were damn near impossible to guard. I'm serious. The only reason Bargnani didn't have a (successful) career was 'cause the referees let people like me beat him up!"

"In today's game, he would be killin' because he would be protected. Ryan, you know, you remember -- he would try that sweep at the three-point line; they wasn't giving him that sh**, that rip-through. We could grab both arms."

Ryan Hollins: "Yo, he was one of my toughest covers because he shot a set shot, and as quick as he would shoot that set-shot three, he'll go and dunk on ya head. And if you could put your hands on him, [you could defend him]. The problem was we didn't switch everything, D-West. We didn't switch everything, so you had to guard Bosh on the roll and both of them out on the pop."

David West: "They were tough, man. But it was a different NBA then."

Imman Adan (Dishes and Dimes): "I mean, I agree that having a seven-footer who could shoot threes and having Bosh, who was one of the best mid-range-shooting big men ever, [sounds good]. But you really think that Bargnani would've killed it in today's NBA?"

David West: "He would've gotten fouled because, again, you can't put your hands on people. So we literally were jamming him on the perimeter, [putting] forearms in his stomach. They weren't calling that stuff. [The Raptors] were like five, six, seven years too early."