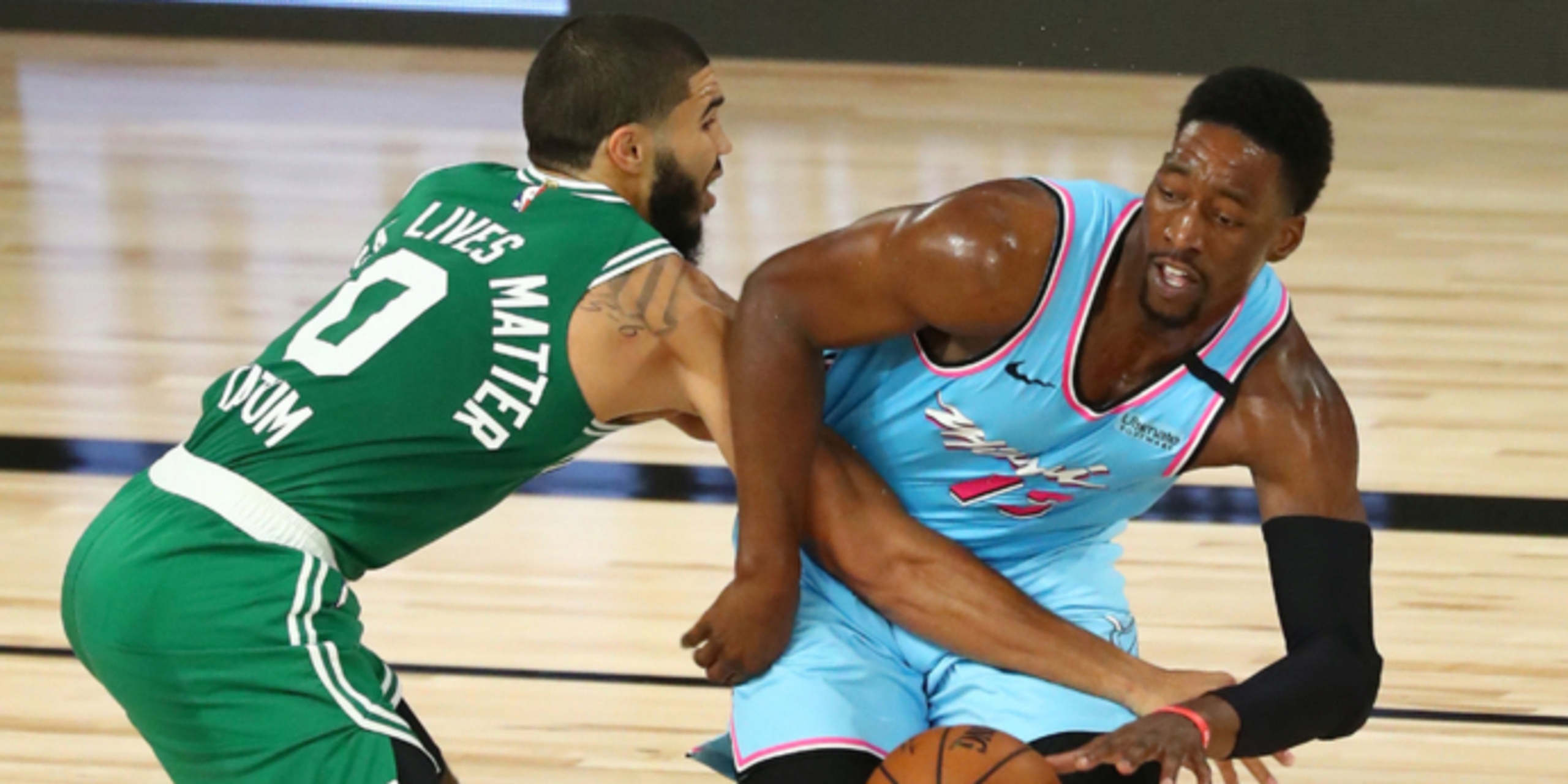 Scouting Report: How the Celtics can stop the Heat

I’m not a coach -- I'm just a pun-loving basketball fan with a hankering for film breakdowns. Instead of a traditional series preview, I decided to go into the basketball trenches and devise gameplans for both teams. The tone of this two-part series will be a little more informal, but it will still be informative (at least I hope). If you missed part one, you can find it here.

Without further ado, here is how the Boston Celtics will try to stop the Miami Heat.

Playing it straight makes the most sense here. There’s an argument to be made for Smart defending Butler, but limiting Brown’s off-ball lapses would be in the best interest of all. He did a phenomenal job last round against Toronto’s Pascal Siakam, stonewalling several of his tornado drives and post-ups. Having Smart hound Robinson around screens should make it difficult for the sharpshooter to get open.

Top Priority on Defense: Timely Switches in the Half-Court

There’s too much versatility on this roster not to keep screening actions in front. That’s going to be imperative against a team like the Heat, whose half-court offense is predicated on creating creases with their screens.

Beyond that, they’re likely going to hunt out Kemba Walker whenever they can. Being on point with “scram” switches can help grind their offensive possessions to a halt. Once Milwaukee started switching more in Game 4 and Game 5, Miami’s offense went later in the clock than they wanted. Let’s make this ugly.

Heat's Team Stats (and Miami's stats vs. Boston in parentheses)

Butler has shaped this Heat team in his image, leading the way with a 22-6-4 statline through two rounds. The ultimate grinder, he’s been bumping and tussling his way to the rim and getting free throw attempts (10.7) all postseason long. He was the best player on a court in a series that featured the league’s MVP; he can absolutely make the same claim if he gets rolling downhill in this series.

Making sure Butler doesn’t get downhill is going to be priority number one. He’s a powerful driver and has the passing chops to beat help if it comes early. If he gets to the line -- like he did during the regular-season matchups (22 attempts in two games) -- that’s going to further grind this game down.

Playing “drop” or “ICE” against Butler is fine, so long as the “big” plays further up. What got Milwaukee into trouble at times was sending Butler’s defenders over screens, while also having Brook Lopez below the free-throw line. That’s too much space for Butler, and it allows him to get into his floater instead of a long pull-up. Boston can’t let Butler have this shot:

Butler has to work hard for this shot. It’s mostly fine defense, with Brown sending Butler down and Theis giving a vertical contest at the end. As you can see, “mostly fine” won’t be good enough against Butler.

Butler is just 7-of-19 on dribble jumpers out of pick-and-rolls during the postseason, but 5-of-7 on floaters, via Synergy. That 36.8 percent clip on jumpers isn’t good, and it’s still a big step up from his regular-season mark (30.5).

He’s been a little more aggressive this postseason, but the dirty secret is that Butler still leans passer vs. scorer unless the look is too fruitful to pass up. Take away the space he wants, and there’s going to be a path to getting Miami to toss up a lot of late-clock junk due to overpassing.

2) Stay down on the up-fakes

Butler gets fouled a lot. He can overpower smaller defenders and blow past bigger ones to get them on his hip. If you’re caught in a slight trail, he’s likely to toss up a pump fake to get you in the air.

It’s easier said than done, but you have to stay disciplined against Butler. Force him to make shots over a contest. If he can knock those shots down, good for him. If he has to expend a bunch of extra energy to elevate over contests after a failed pump fake, that’s going to make him a couple of percentage points worse on the other end. Play the long game.

Again, Butler is going to be hunting for outlets on the drive if he doesn’t have an initial advantage. He’s looked to empower his teammates all season long, sometimes to a detriment. There’s going to be an opportunity to use that tendency against him early in games.

Smart does a great job of staying connected during this “ICE” coverage, but look at how quickly he gets his hands up. He’s already prepping for that kick-out above the break, and is able to deflect it from behind. Great job by Brown dropping down to cut off the roll from Derrick Jones Jr., further forcing Butler into the above-the-break pass.

The same principles are going to apply if Butler runs a pick-and-roll towards either baseline. He likes to tiptoe the line and hunt for cutters from the slot. Crowd the paint, cut off the opposite corner and he’s going to be dead in the water.

A first-time All-Star, an All-Defensive second team selection and strong second choice for this year’s Most Improved Player award, Adebayo is one of the most unique talents in the NBA. He's a big that can oscillate between multiple roles in a single possession -- on either end of the floor. He’s one of the few players who can claim a physical mismatch against Boston this series, as long as he’s ready for that kind of spotlight.

The Heat are going to need Adebayo to be a scorer to win this series. He’s talented enough to do it, but like Butler, he’s much more comfortable being a connector.

When he’s forced into isolation situations, he wants to attack his defender's front foot for blow-bys. He sets up drives nicely with a believable jab step. The good news for Boston is that it’s pretty much the only move you have to worry about with him.

Play him flat so that he doesn’t have an easy angle to attack. He doesn’t have enough wiggle to counter, and it puts him in position to finish over the top of contests. His touch is mostly fine, but things go haywire if you crowd his space.

That’s what you want right there. There’s a slight shade by Brown to force Adebayo to his left. Brown’s able to slide with him, absorb the first blow, and force him to finish over the top. Here’s another, less stationary example:

Adebayo fakes the handoff with Robinson, a smart counter that forces a switch. As you can see, though, there’s no shake -- and there’s definitely no shaking Marcus freaking Smart, who sits on the brief hesitation, absorbs the contact on the spin and forces him to finish over the top.

As powerful and skillful as Adebayo is, he hasn’t quite figured out how to abuse size mismatches yet. Adebayo hasn’t been successful against guards in isolation (0.81 PPP), and has been fine-but-underwhelming on post-ups (1.00 PPP) via the Second Spectrum source.

Him taking those shots are a win for the defense until proven otherwise.

Duncan Robinson: Stop at all costs

Gordon Hayward is showing high to prepare for a switch on Tatum. Robinson reverses course and flies off an Olynyk handoff. Not only is Hayward caught lagging, he then runs into -- and tries to fight under -- the Olynyk screen. That simply can’t happen.

Either switch those actions or show two to the ball, and trust the rotation behind it. Robinson is an improving passer, but forcing him to pick up his dribble and stall out those actions is a reasonable bet to make.

Olynyk gets the title of Miami’s weirdest player. He has the perimeter shooting ability to abuse drop or “ICE” coverage, but is skilled enough to abuse guys on the block if there’s a size mismatch. He just kinda bumps-and-grinds his way into cheap points.

Assuming the Heat stick with their starting lineup, Olynyk’s gonna be matched up with either Grant Williams (smaller), Enes Kanter (struggles in space) or Williams (overeager in space). He’s a guy who can buy one or both of Miami’s stars some rest by keeping the offense afloat. Stay disciplined against his fakes, keep your hands out of the cookie jar so he can’t hook you.