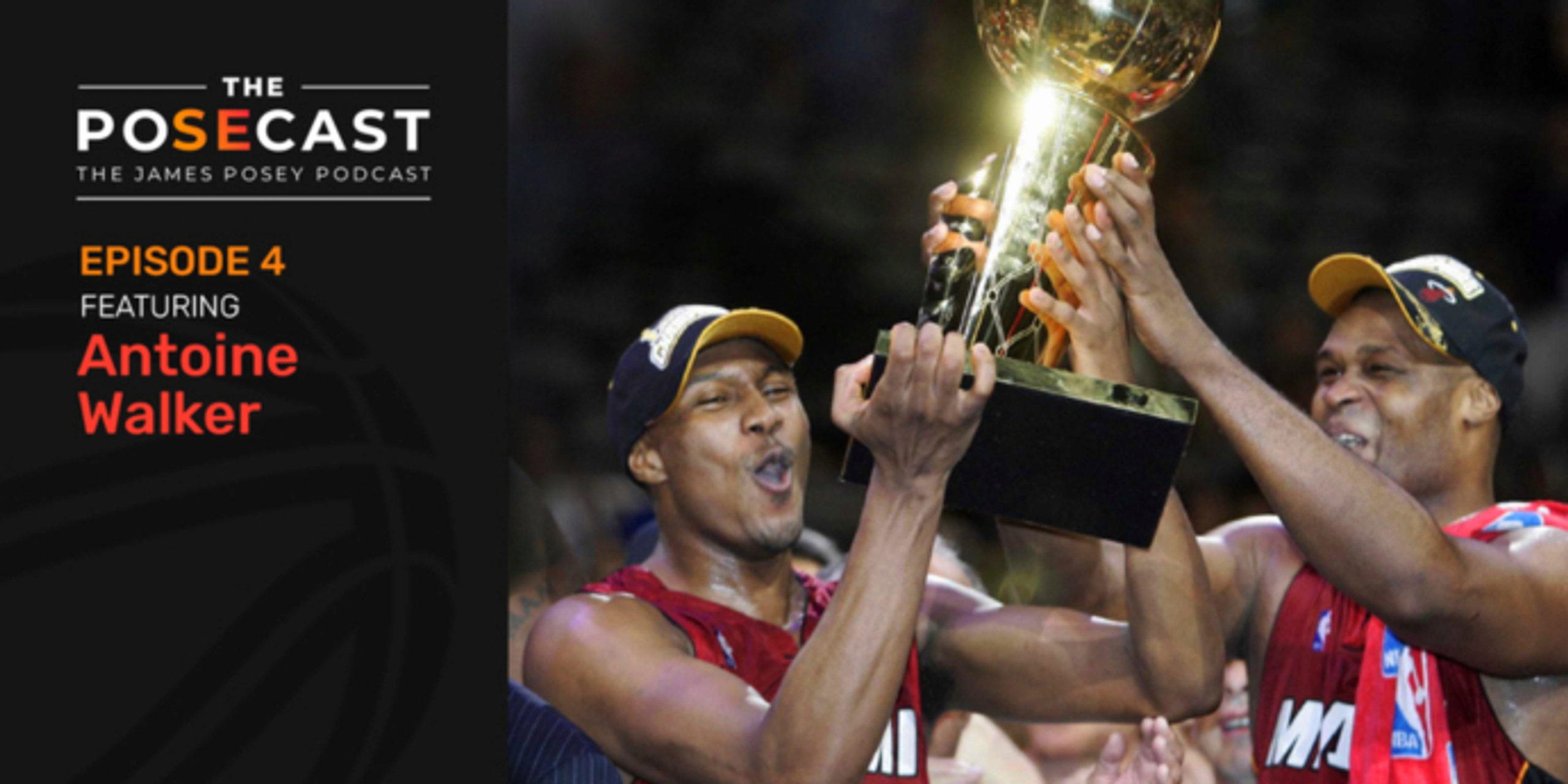 Three-time All-Star and NBA champion Antoine Walker joins The Posecast. Walker and James Posey were teammates in Miami, winning a championship together in 2006. Walker talked about that title, his Chicago roots, his experience training with Michael Jordan, his best stories from partying hard in Miami with Posey and more. Here are the time-stamps (if you want to jump around):

1:10: Antoine talks about how he fell in love with basketball and why he decided to quit football and baseball to focus on hoops.

2:20: Growing up, which players did Antoine model his game after?

3:40: Antoine talks about where Chicago ranks among the basketball hotbeds.

5:25: Many of Chicago's best prospects have left Illinois to play college basketball in other states (including Antoine, Anthony Davis and Dwyane Wade). Why is that?

7:05: Antoine discusses why he chose to play at the University of Kentucky and shares what other schools were in the mix.

11:20: What does Antoine think of John Calipari and the evolution of Kentucky's program?

14:45: Antoine talks about being part of the 1996 NBA Draft (with Kobe Bryant, Allen Iverson, Steve Nash, Ray Allen, Stephon Marbury, Jermaine O'Neal, etc.) and why he feels it's the best class ever.

16:05: Rick Pitino coached Antoine at Kentucky and then coached him on the Boston Celtics too. Antoine discusses why Pitino struggled as an NBA head coach.

19:05: Antoine talks about getting to know Paul Pierce and playing with him in Boston.

20:45: Antoine was with adidas (along with Kobe Bryant and Tracy McGrady among others). He talks about his adidas deal and the "Employee Number 8" campaign.

24:40: In 2005, Antoine and James were both dealt to the Miami Heat as part of a five-team, 13-player trade (the largest in NBA history). They discuss that trade and how it came together.

28:00: James and Antoine talk about landing in Miami and how excited they were to join the contending Heat.

30:35: Antoine says he knew all season that nobody could beat Miami in the playoffs and that they were going to win it all in 2006 (as long as they stayed healthy).

31:05: Initially, Stan Van Gundy was Miami's head coach and then Pat Riley took over on the sidelines. James and Antoine discuss Riley's impact.

33:50: Antoine and James talk about being down 0-2 in the 2006 NBA Finals to the Dallas Mavericks and how Miami was able to come back to win the title.

36:30: Antoine and James talk about partying together in Miami, including some wild nights at the King of Diamonds strip club after the Heat won the championship.

39:00: James and Antoine share a hilarious story about partying in Miami during Super Bowl weekend in 2007. NFL star Shawne Merriman was buying bottles in the club and Posey kept one-upping him.

41:20: Antoine talks about how the NBA has evolved and which of today's players impress him the most.

43:25: James and Antoine discuss the Eastern Conference Finals match-up between the Heat and Celtics. They also talk about Miami's culture and the job Erik Spoelstra has done.

46:40: Which part of Antoine's game didn't get enough recognition?

47:40: Antoine discusses his shimmy and where that celebration originated.

49:15: Antoine talks about his experience training with Michael Jordan and playing summer pick-up games with him in Chicago (against guys like LeBron James, Gilbert Arenas, Penny Hardaway, etc.).

53:15: James and Antoine share some of their best MJ stories.

59:30: What advice would Antoine give to his younger self?