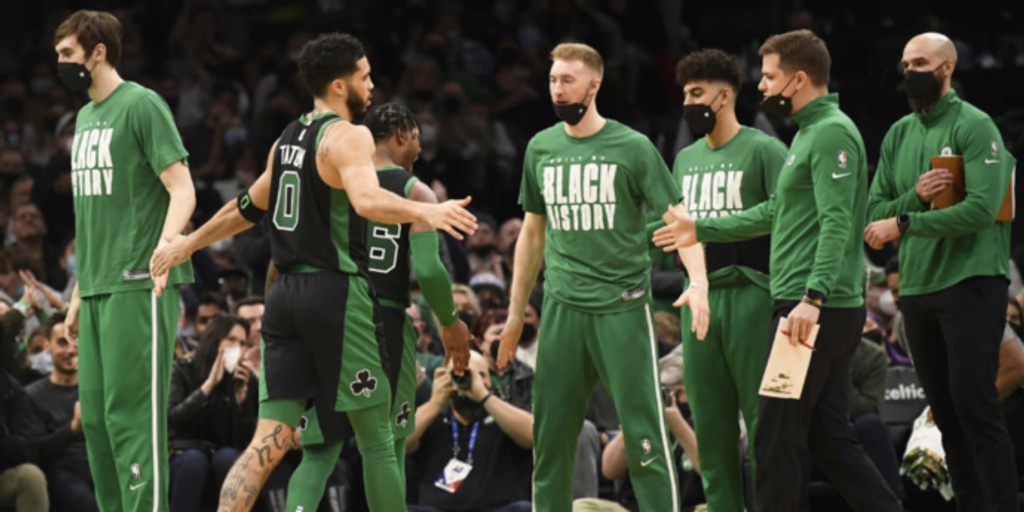 The Phoenix Suns continue to cruise, while the Utah Jazz and Boston Celtics have been grinding their way into the NBA's upper-echelon as of late.

The Suns have been, by far, the best and most consistent team in the NBA this season. They proved it once again last week by beating up on three of the Eastern Conference's best teams (the Chicago Bulls, Philadelphia 76ers and Milwaukee Bucks) in succession.

The Grizz are currently riding another five-game winning streak and have won 21 of their last 25 contests. Memphis will look to make it seven in a row heading into the All-Star break by beating the New Orleans Pelicans and Portland Trail Blazers this week.

The Warriors have dropped 3 of their last 4 games, including an embarrassing home loss to the New York Knicks last Thursday and a 15-point shellacking by the Los Angeles Clippers on Monday night. Golden State is now five games behind the Suns for the top spot in the Western Conference. "Our defense has just been bad for six, seven games now. It's hard to win in this league when you're looking like we are defensively, with so many holes," Warriors head coach Steve Kerr said after Monday's loss.

The Heat welcomed Kyle Lowry back earlier this month, and have won each of the five games they've played with their point guard in the lineup.

Shockingly, DeMar DeRozan has pushed his name into the fringes of the MVP conversation of late due to his awe-inspiring play over the past few weeks. He has scored at least 30 points in seven consecutive contests, making him the first Bull with such a streak since Michael Jordan during the 1996-97 season. During this seven-game stretch, DeRozan is averaging 37.6 points, 5.6 rebounds and 5.7 assists, while shooting 58% from the floor.

On Monday night, the Jazz wrapped up a perfect 6-0 homestand with an easy victory over the Houston Rockets. They also welcomed back Rudy Gobert in that contest, who had missed nine games due to a left calf strain. It was the first time Utah had its entire starting five on the floor together since Jan. 13.

James Harden spoke with the media on Tuesday for the first time since his arrival in Philadelphia and said the Sixers were a "perfect fit" and his first choice. "Obviously, you got the best big man in the league in Joel [Embiid] and then obviously the coaching. Just from top to bottom, it made sense," Harden said. The Beard also seemed to take a swipe at a former teammate, stating, "I needed to be around guys that I know want to win and are willing to do whatever it takes to win."

The Bucks' loss to the Suns in Phoenix last Thursday was understandable, if not acceptable — but Monday's defeat to the Blazers was demoralizing. Milwaukee's defense has been horrendous as of late. The team ranks 27th in the NBA in Defensive Efficiency dating back to late January.

The Celtics are riding the league's longest winning streak, having notched eight straight victories. They have been the best defensive team in the NBA in 2022, and added Derrick White prior to the trade deadline, who should help them on both ends of the floor.

On Monday, Luka Doncic was named the Western Conference Player of the Week after averaging a whopping 43.0 points, 10.3 rebounds and 8.3 assists over Dallas' past three games. In the two games he played against the Los Angeles Clippers late last week, Doncic tallied 96 points, 24 rebounds, 14 assists and 13 made three-pointers. According to Basketball-Reference, he is the first player in NBA history with at least 96/24/14 and 13 treys over a two-game span.

The Nuggets didn't make a major move at the deadline, but Denver fans are hoping two key contributors return before the playoffs arrive. Nuggets president of basketball operations Tim Connelly said last week that he believes Jamal Murray and Michael Porter Jr. will be physically cleared to return "hopefully in the not too distant future."

Anthony Edwards tallied 37 points with 7 threes, 5 rebounds, 4 assists and 4 steals in Sunday's victory over the Indiana Pacers. However, it was his very first bucket of the game that made history, as it was the 2,500th point of his career. At 20 years, 192 days old, Ant-Man is the fourth-youngest player in NBA history to reach that total. LeBron James, Kevin Durant and Devin Booker are the only players to reach that milestone at a younger age.

The Raps had won eight straight games before losing to Denver over the weekend, and then shockingly, Toronto was pummeled by the Pelicans on Monday night, 120-90.

Although Ben Simmons has yet to suit up, the other players the Nets got in the Harden deal provided a much-needed spark Monday night, and helped snap Brooklyn's 11-game losing streak. Seth Curry racked up 23 points, 7 rebounds and 5 assists in 32 minutes in his Nets debut, while Andre Drummond chipped in 11 points, 9 rebounds, 4 assists, 2 steals and a block in 24 minutes.

The Clippers have registered two impressive victories in a row. They held off the Mavericks in Dallas on Saturday, despite a 45-point explosion from Luka Doncic. Then, on Monday, L.A. beat the Warriors, 119-104.

The Hornets have lost 7 of their last 8 games, and their only victory during this stretch has been over the hapless Detroit Pistons. Charlotte hasn't beaten a team with a winning record since defeating the Celtics back on Jan. 19.

As BasketballNews.com detailed earlier this week, the Lakers have somehow managed to turn a championship-level roster into a team that finds itself six games below .500 with an outside chance of finishing the season on the outside of the playoff picture looking in.

Not only have the Hawks lost 4 of their last 5 games, but the team also learned over the weekend that forward John Collins — who injured his foot in Friday's loss to the San Antonio Spurs — has been diagnosed with a right foot strain and will be sidelined through the All-Star break.

Washington head coach Wes Unseld Jr. told reporters Monday that there is a chance that the newly-acquired Kristaps Porzingis — who has been dealing with a bone bruise in his right knee — may be medically cleared to play this week. "He's doing a little bit more every day on the floor," Unseld said. "That's a positive sign, but we still have to be cautious with it. When the time's right, he's ready."

.@AnferneeSimons drops 31 PTS on the road to give the @trailblazers their 3rd straight W! 🙌#NBA75 pic.twitter.com/AlS3oTWN8Q

Break up the Blazers! After Portland busted up its core at the deadline, most pundits assumed the team would sink to the bottom of the standings. However, the Blazers are 3-0 since trading away CJ McCollum and Co., with shocking wins over the Lakers, Knicks and Bucks. During this three-game stretch, Anfernee Simons is averaging 30.0 points, 6.3 assists and 6.0 made treys, while slashing .486/.462/.800.

On Monday, the Pels ended a brief two-game losing streak with an impressive blowout victory over the Raptors. CJ McCollum — who tallied 36 points, 11 rebounds and 5 assists on Saturday — scored 23 points on an efficient 9 of 13 shooting in Monday's 120-90 win over Toronto.

The Knicks have lost 9 of their last 12 games, and things don't get any easier over the next few weeks. After hosting the Nets on Wednesday, New York will play Miami and Philadelphia right after the All-Star Break before embarking on a brutal seven-game road trip (its longest of the season).

De'Aaron Fox has scored more than 25 points in each of the four games he's played since returning from an ankle injury after the trade deadline. Fox is averaging 27.0 points (on 49.4% shooting), 4.8 rebounds, 4.0 assists and 2.0 made three-pointers during this four-game stretch.

With their loss to the Bulls in Chicago on Monday, the Spurs are just 1-12 this season in the 13 games they've played against teams that are currently over .500.

After tallying 11 points, 12 rebounds and 10 assists in a loss to the Bulls on Saturday, Josh Giddey exploded for a career-high 28 points, 12 assists and 11 rebounds in OKC's victory over the Knicks at Madison Square Garden on Monday night. Giddey is the youngest player in NBA history to record a triple-double in back-to-back games.

The Pacers' moves before the deadline have given Oshae Brissett a chance to step in, and the 23-year-old out of Syracuse has stepped up. Over Indiana's past three games, Brissett is averaging 18.3 points, 10.0 rebounds, 2.3 assists, 1.3 blocks and 2.3 made triples (on 43.8% shooting from downtown) in 34.7 minutes per contest.

The Rockets have lost 9 of their last 10 games, and have to travel to Phoenix to take on the league-leading Suns on Wednesday night.

In a season with few other bright spots for Orlando, Franz Wagner continues to impress. The rookie sensation stuffed the stat sheet with 26 points, 8 rebounds, 4 assists and 2 steals in Monday's loss to the Nuggets.

Marvin Bagley III, who the Pistons acquired from the Kings at last week's deadline, finished with 10 points and 8 rebounds in 21 minutes in his Pistons debut on Monday. Bagley will compete for minutes with Isaiah Stewart and Kelly Olynyk over the second half of the season.