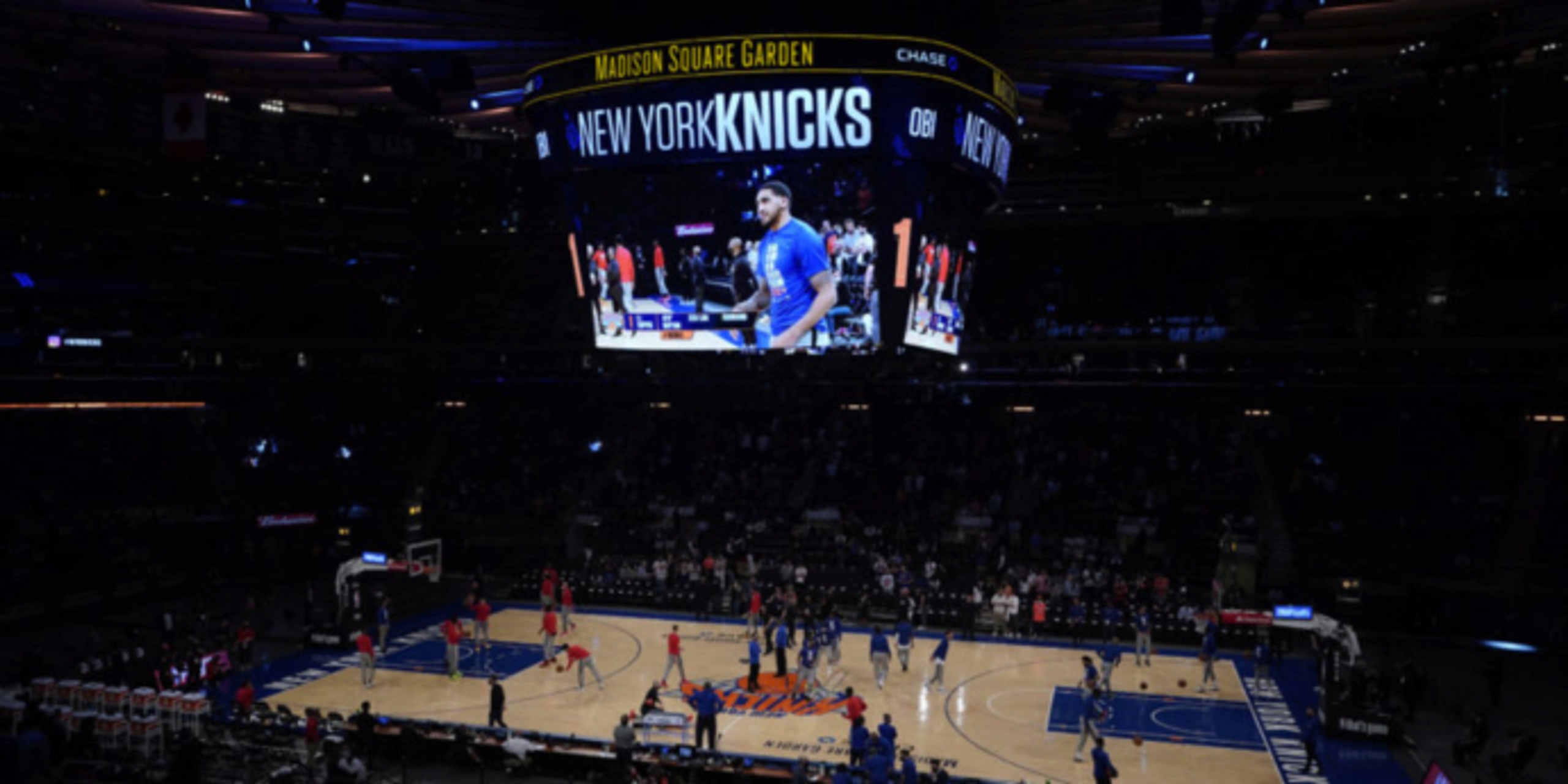 It had been more than 14 months since I had last entered an NBA arena when I approached Madison Square Garden's media entrance on the corner of 33rd Street and 8th Avenue on Sunday afternoon.

The last year has felt like a blur, tinged with excessive amounts of anxiety and grief. New York emerged as the United States-based epicenter of a devastating global pandemic that has claimed more than 3.4 million human lives. Yet, with vaccination rates rising and COVID-19 case counts plummeting, Manhattan has been starting to feel a bit more "normal."

And Sunday almost felt like a flashback to a happier, less stressful time, with the sun shining brightly down on the streets outside MSG that were teeming with unmasked smiling faces above blue and orange jerseys.

It had been more than eight years since the New York Knicks had last participated in a playoff game when they stepped onto the floor Sunday night for their matchup with the Atlanta Hawks. Over the 2,927 days that separated postseason appearances, the Knickerbockers lost more games than any other team in the NBA. The first 20 years of the 21st century provided depressingly few opportunities for Knick fans to get genuinely excited about the present or the future of their favorite team. Between awful trades and embarrassing off-court controversies, it became increasingly difficult for New Yorkers to remain loyal to their hometown team. However, so many of them did.

For those reasons alone, this 2020-21 Knicks squad has engendered an incredible amount of love and affection from the Knicks fan base.

More than that, this particular team will forever hold a special place in the hearts of many fans due to everything going on outside the comfy confines of the court as the season played out. The season started in December, which coincided with a dizzying spike in coronavirus cases nationwide. By January, the COVID-19 crisis in the U.S. had reached a terrifying peak, with the country averaging more than 250,000 new infections and nearly 4,000 COVID-related deaths per day. Sports, which have long been considered a much-needed distraction from the weighty worries of the "real world," have been crucial to the mental health of so many of us during the dark days of the pandemic. Due to a tightly-packed schedule, Knicks fans have had the opportunity to tune into a game seemingly every other night for the past five months.

In seasons past, Knicks games had often been rendered meaningless by Christmas, as the team sank to the bottom of the standings, year after year. Shockingly, the team didn't follow the all-too-familiar script in 2020-21. Although multiple outlets projected New York to finish with one of the league's worst records, and Las Vegas set the Knicks over/under win total at 22, the 'Bockers got off to a solid start. Still, even the most optimistic fans assumed the team would come crashing back down to earth, sooner or later. But a funny thing happened on the way to the lottery: the Knicks kept winning.

And it felt as if New York's loving embrace of this team was about more than just its surprising success. It might have had something to do with parents, worried about COVID outbreaks at their kids' schools, cherishing the opportunity to get lost in the triviality of a basketball game for a couple of hours. Or New Yorkers choosing to worry about who Tom Thibodeau should start at point guard instead of stressing about the sputtering economy. 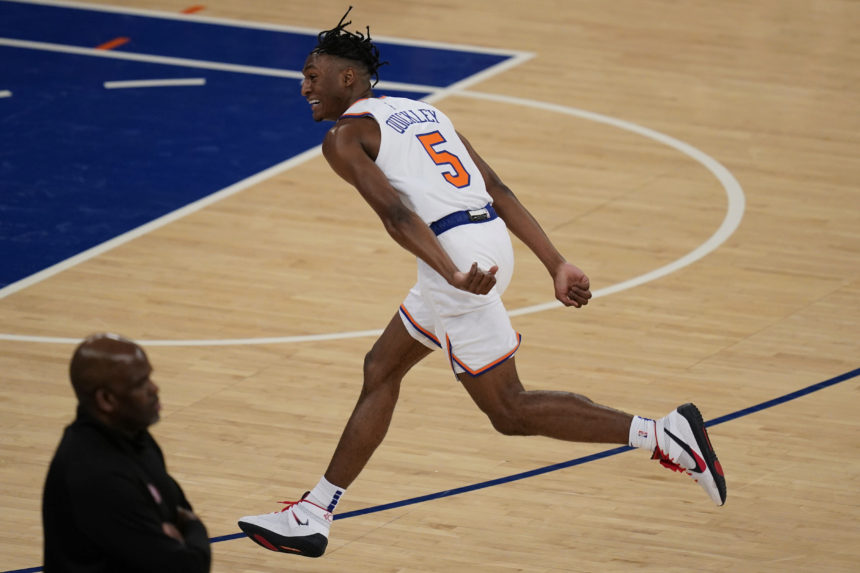 It had been more than two decades since the Garden rocked and swayed and shook the way it did Sunday night during Game 1.

My first year covering the Knicks professionally was 2005. Over the past 15 years, I've sat through plenty of games when the loudest the building ever got was when the Knicks City Dancers would fire T-shirts into the crowd. With many fans unable to afford tickets and the team effectively eliminated from playoff contention by Thanksgiving, there wouldn't be a passionate "DE-FENSE" chant inside MSG for months at a time. If the Golden State Warriors or Cleveland Cavaliers were in town, the loudest cheers were often reserved for Steph Curry or LeBron James.

Yet, the cacophony of sound heard inside Madison Square Garden during Game 1 was reminiscent of an earlier era, when giants such as Patrick Ewing, Charles Oakley and Anthony Mason roamed the paint inside the World's Most Famous Arena.

The electricity and energy inside the building was evident from the very start of the evening. As soon as the gates opened and patrons began flooding in, cheering and chanting began to emanate from all corners of the arena.

By the time the Knicks players sprinted out onto the floor for pre-game warmups, the clamor had reached a fever pitch.

I remember Jeff Van Gundy once telling me that one of his most enduring memories from his time spent in New York was how loud the Garden got some 30 minutes before games even tipped off during those epic playoff runs in the 1990s. I thought about JVG's observation as I looked around MSG Sunday night with the guttural shouts from 15,000 unleashed fans washing over everyone.

The Knicks got off to a slow start in Game 1, possibly jolted and jittery by the deafening crowd noise. It was something they hadn't experienced this season, as local municipalities had set a cap on the number of people allowed to attend sporting events held inside. Nonetheless, everyone knew the Knicks were going to make a run. The partisan supporters packed inside MSG would make sure of it.

Surprisingly, it was a pair of rookies that sparked the charge. With New York down seven points in the middle of the second quarter, Immanuel Quickley dropped in a floater. A minute later, Obi Toppin drained a three-pointer from the top of the key. When IQ sank a three-pointer from 30 feet on the following possession, the Garden erupted.

Born and raised on Long Island, I made many a pilgrimage to MSG far before I started covering the team. On special occasions throughout the '90s, my dad and I would hop on the LIRR and head into the city. For those who weren't fortunate enough to experience it, it's hard to describe how loud the Garden got during crucial playoff games in those days. The decibel level inside the Garden on Sunday night was likely the closest approximation.

Midway through the third quarter of Game 1, RJ Barrett broke free on a fast break and viciously dunked over Bogdan Bogdanovic. Those of us seated on the Chase Bridge felt it wobble and quake in the aftermath of that Barrett bucket.

Speaking with reporters on Monday, Obi Toppin said the players "felt the floor shaking" Sunday night. Barrett described the atmosphere inside MSG as "amazing," adding it was "better than [he] could ever imagine."

A buddy of mine, seated in Section 109, texted me a screencap after the game; it showed that the health app on his phone had detected increased heart rate and physical activity from 7 to 9 p.m., signifying he had been exercising strenuously. My friend, a season ticket-holder for more than a decade, also noted that there was a feeling of camaraderie and togetherness among those in attendance Sunday night that he hadn't experienced before.

The Knicks allowed 15,047 fans into MSG for Game 1, only 75% of the building's typical capacity of 19,812. However, it's important to note that most of those 15,000 fans were forced to spend the better part of the past 15 months inside, socially isolated. I don't think it's a stretch to speculate that it contributed to the heightened intensity inside MSG. For many fans, it was the first time they had the opportunity to gather and let loose in a community setting; the first time in a long time they had the green light to scream and cheer and high-five strangers.

The Knicks ended up losing the game, of course, with Trae Young turning raucous applause into eerie silence late in the fourth quarter.

Yet, afterward, outside the Garden, there was still a palpable sense of excitement and exhilaration among many of the fans exiting the arena and heading out into the NYC night. And with Game 2 scheduled for Wednesday, it's safe to assume Knicks fans, whether they plan to watch the game inside the Garden or from their couch, will relish the opportunity to be pleasantly distracted once again.