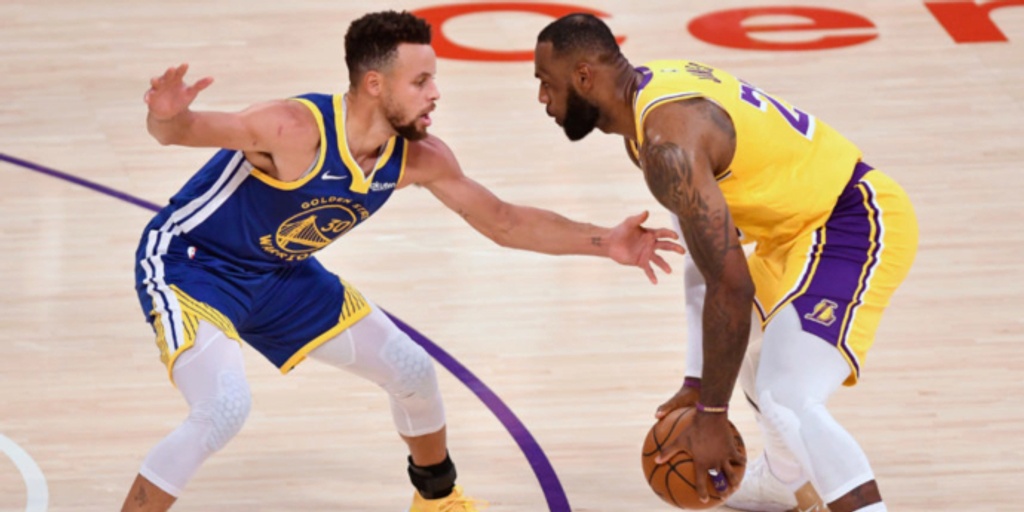 For the first time in three years, a rivalry has been renewed. Stephen Curry and LeBron James will duke it out in "the playoffs” for the fifth time in their respective careers, albeit under new circumstances.

1. LeBron is no longer a member of the Cleveland Cavaliers. He is a defending NBA champion donning Los-Angeles-Lakers purple and gold, flanked by arguably the most talented teammate he’s ever played with in Anthony Davis. He’s also 36 years old and with plenty of mileage, as evidenced by a career-high 27 games missed this year (mostly due to a high ankle sprain).

2. Curry and the Golden State Warriors look much different these days. Despite an 8-1 finish to the regular season, they are not the same dynasty that went to five-straight Finals. Though Draymond Green is still setting the tone and playing sensationally alongside Curry, their right-hand man Klay Thompson has been missing for two-consecutive seasons. Kevin Durant has since departed to the Brooklyn Nets and veterans like Shaun Livingston and Andre Iguodala are no longer around either.

3. The transcendent stars are set to meet in the NBA Play-In Tournament, with the winner’s team earning the No. 7 seed and a first-round matchup with the Phoenix Suns. Whoever’s squad loses on Tuesday will have to defeat the winner of the Grizzles-Spurs game in order to earn the No. 8 seed and face off with the top-seeded Utah Jazz.

Warriors-Lakers is the wildcard matchup of all wildcard matchups. It features star power, a playoff-like feel and storied franchises in a battle to avoid missing the postseason. James and Curry are used to fighting for a Larry O’Brien trophy, but this is a decent consolation prize for viewers.

So what should we be looking out for in this one-and-done clash? A few things come to mind.

The Warriors have been playing small-ball for a while now, but Green is playing point center at an alarmingly impressive level this season. Will Andre Drummond and Marc Gasol be able to defend him as he facilitates out on the perimeter with Curry and Andrew Wiggins snaking around in the half-court? It would probably serve Los Angeles best to employ Davis at the five and start Kyle Kuzma at the four. From an offensive standpoint, Davis can at least shoot over the top and sky over Green for some rebounds.

Still, there’s no question that this will be a physical encounter between Davis and Green; in their lone matchup this season, Green held Davis to 1-for-7 from the field in 8:31, according to NBA.com. Also, it probably wouldn’t be an awful idea for Frank Vogel to send Montrezl Harrell out with the second unit to try and overpower Juan Toscano-Anderson.

When defending James and Curry, you have to decide what you want to try to force them to do. In the case of the former, do you take away the others and allow him to be a scorer first and a playmaker second? It’s the age-old question: Do you make LeBron beat you, or do you force his teammates to step up? It’s not an easy choice with a double-double machine such as Davis serving as LA’s Plan B. Keeping LeBron out of the paint and making him a jump-shooter -- even knowing how well he’s shot the ball -- is likely the best-case scenario.

As for Curry, it’s more complex because he’s in perpetual motion without the ball and is just as dangerous with the ball in his hands. The only thing you can really do is hound him as much as you can, throwing different defensive looks at him throughout the game and picking him up as soon as he crosses half-court. But even when he’s double-teamed, the Warriors are scoring 1.16 points per possession, per NBA.com. Dennis Schroder, Kentavious Caldwell-Pope, Alex Caruso, Wesley Matthews and company will have their work cut out for them.

Usually in a playoff series, there's a player or two who is the difference-maker and teams have to make adjustments. In this case, it’s only one game, so somebody will ultimately step up and lead his team to victory without the opposition having a counter. Who are the potential X-Factors to watch?

Starting with the Warriors, this has to be Andrew Wiggins. The 26-year-old is coming off arguably the best season of his career, shooting the ball with confidence and defending pick-and-rolls and drives well. He’s undoubtedly going to be tasked with guarding LeBron, so we’ll see how that affects his offensive output. In May, Wiggins averaged 22.6 points and 5.5 rebounds per game on 61.1% True Shooting.

For the Lakers, it’s a combination of Dennis Schroder and Kyle Kuzma. Who is going to rise to the occasion? Prior to his missed time due to COVID protocols, Schroder had been playing solid defense with up-and-down contributions on the offensive end. There will be an onus on him to deliver quickly to make up for lost time. Kuzma has starred in his role for Los Angeles this season, making timely plays in key moments -- offensive rebounds, big stops, coming up with 50-50 balls. He’ll have to be more aggressive as a scorer in this contest, especially with Kelly Oubre Jr. missing from Golden State’s rotation.

LeBron has said in the past that Game 1 of a playoff series is a feel-out game, typically seeing how things transpire on the floor before making adjustments. With Curry sizzling hot and Golden State entering this contest as the hottest team in the NBA, James won't be able to just let the game come to him this time -- and that makes this one-night-only matchup must-watch TV.