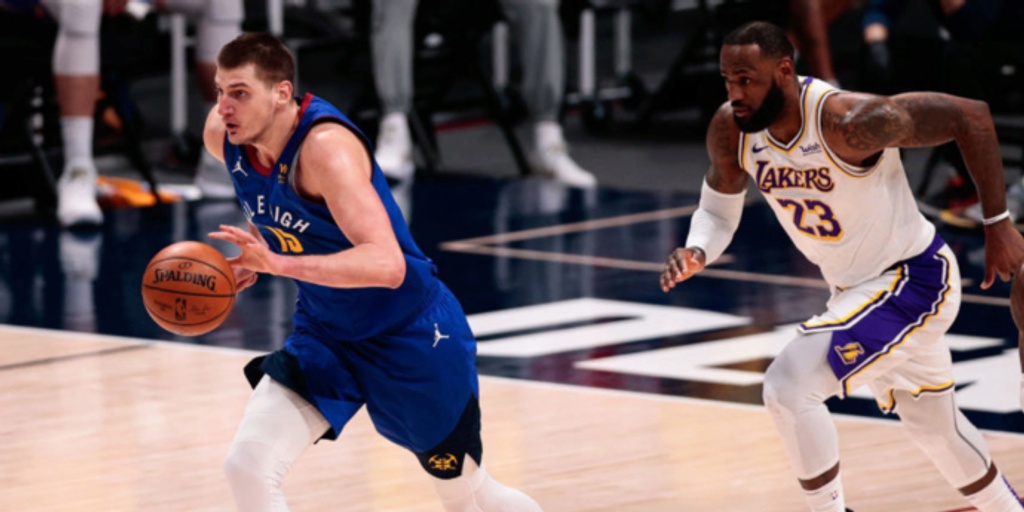 LeBron James had a bad Saturday, as did everyone who wagered on him to win this year's Most Valuable Player award. His high ankle sprain has shaken up the MVP race, and Nikola Jokic is now a heavy favorite to win it.

Yes, the same Jokic who plays for the fifth-best team in the Western Conference.

“I hereby cast my ballot for Nikola Jokic because the Nuggets never would have finished fifth without him!”

Anyone with a ballot who would dispense that type of quote is undeserving of a vote, so take what the sportsbooks are doing with a grain of salt.

The race is now super wide-open, and the only big winners are the folks who take bet slips for a living, along with those who invested in sports gambling companies when the pandemic hit.

DraftKings, Bet365 and William Hill all took MVP odds down overnight when James suffered his injury against the Atlanta Hawks. FanDuel and BetMGM made Jokic the +110 favorite (wager $110 to win $100), and PointsBet.com made the Nuggets' All-Star big man an even bigger favorite at -110.

It is unclear how long James will be sidelined, but the pivot by the books reflected an expectation that he will be on the shelf for a while. James had played in all but one of the Lakers’ first 42 games, so a two-week absence would not necessarily knock him out of the race. Allen Iverson missed 11 games in his MVP season of 2000-01, and Bill Walton sat out 34 when he was MVP for Portland in 1977-78.

But the books are not privy to what the Lakers’ medical staff knows, and perhaps they did not read the end of his latest tweet closely enough?

Nothing angers and saddens me more than not being available to and for my teammates! I’m hurt inside and out right now. 🤦🏾‍♂️. The road back from recovery begins now. Back soon like I never left. #ThekidfromAKRON🤴🏾

One place sportsbooks are most popular is among investors and investment firms, who saw the growth of this industry coming the same way commissioner Adam Silver did when he penned an op-ed for the New York Times in 2018, about five months before the main U.S. sports gambling law was overturned by the U.S. Supreme Court.

Since the pandemic hit and people stopped spending money on things like restaurants, gasoline and commuting costs, the industry has exploded.

The stock of DraftKings has risen from $9.85 in August of 2019 to more than $72 now. The parent company of FanDuel, Flutter Entertainment, was at $38.19 on March 20, 2020. It is now trading at around $117 on the London Stock Exchange. Why? Because this is a worldwide growth industry, and many Americans like to gamble. Penn National stock was less than $8 when the pandemic struck. On Friday, it closed at $117.37. Folks who saw that coming are getting rich.

It remains to be seen which NBA player will elevate his stock during the time when James is sidelined. Harden has triple-doubled in three of Brooklyn’s last four games. Lillard is averaging more than 33 points per game this month, as the Blazers have gone 8-2. Antetokounmpo’s team has won six in a row. Utah has the league’s best record, yet Donovan Mitchell is +125000 and Rudy Gobert is +250000 at PointsBet.

DraftKings’ biggest exposure is on James, while PointsBet is exposed on Embiid. These liabilities are often determined by where particular books are popular on a geographical basis.

“It’s the same thing that hit Embiid, and somebody else has taken over as the favorite. Jokic’s numbers are tremendous," said Johnny Avello, the head oddsmaker at DraftKings, adding that action was coming in steady Sunday on Harden and Lillard.

Jeff Sherman of LV Sportsbook took the line down when James was injured, and then reposted it with Jokic lowest, followed by Embiid, James, Harden, Antetokounmpo and Lillard.

“A few tickets have come in here and there, most on Harden and Lillard,” Sherman said.