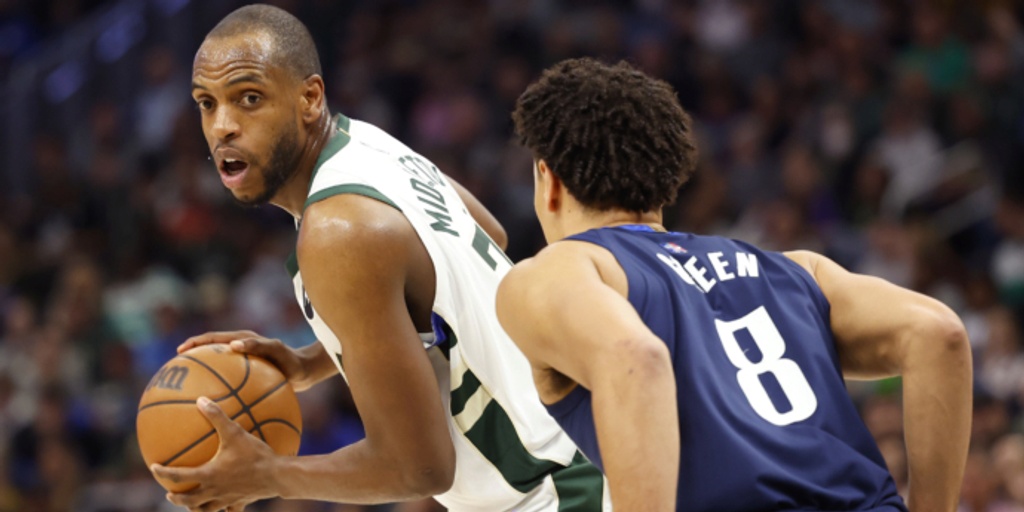 Reinforcements may be on the way for the Milwaukee Bucks.

On Wednesday, The Athletic's Shams Charania reported that star wing Khris Middleton could make his season debut for the Bucks as early as Friday night when Milwaukee hosts the Los Angeles Lakers.

Whether Middleton returns on Friday or early next week — the Bucks have a two-game road trip on Saturday (Charlotte Hornets) and Monday (Orlando Magic) before returning home on Wednesday (Sacramento Kings) — adding him back into the fold should pay immediate dividends for the 2021 champions.

The Bucks have held serve in Middleton's absence, currently holding the second-best record in the NBA (14-5), only trailing the Boston Celtics (17-4). They've done so behind a wall-like defense, boasting the league's best Defensive Rating (106.5) and second-best half-court defense (91.3 points per 100 plays). With Brook Lopez anchoring the paint, Giannis Antetokounmpo roaming around and the guard tandem of Jrue Holiday and Jevon Carter hounding ball-handlers, teams haven't been able to put points on the board.

Quietly, though, the inverse has been true: The Bucks haven't been putting much on the board either. They rank 18th in Offensive Rating (111.1) and 22nd in half-court offense (94.3). Even the transition attack has been off-kilter (118.7, 24th), an oddity for a team featuring Giannis.

Safe to say, Middleton will help. Off rip, he'll help a pick-and-roll attack that hasn't been nearly as effective as it's been in years past. Giannis being utilized more as a screener has been the key to unlocking their late-game offense over the past two seasons. Without Middleton, the team's best shooting threat on and off the ball, teams have been fine ducking under screens and daring the other ball-handlers to beat them with jumpers. Helpers can stay at home and bank on inconsistent shooting or decision-making, or they can dial up the pressure without being worried about who's on the perimeter as much.

To that point: Possessions featuring Giannis as the on-ball screener have wielded 0.93 points per possession (PPP) so far this year, a mark that ranks 78th among 119 players to set at least 100 picks this season per Second Spectrum.

The Holiday-Giannis pairing (0.89 PPP) hasn't been fruitul. That holds true for Grayson Allen (0.83 PPP) or George Hill (0.92 PPP) as the ball-handler. You can tip your hat to the Carter-Giannis pairing (1.07 PPP); Carter's shot-making has been a pleasant surprise, but it's also been something teams have been okay living with.

Points are points, of course, but in terms of bending defenses, the effect just isn't there to the same degree. Middleton's presence will force the math to change for defenses. He can get his own shot — he's drilled 48.5% of his pull-up twos since 2017-18 — which should pry some of the attention away from Giannis. And any extra attention shown towards those two will make catch-and-shoot windows even wider for whoever's playing alongside them.

It's easy to see how Middleton will help unlock Giannis; quietly, this may have even more of an effect on Holiday. Here are some Holiday stats from last season:

And here they are for this season:

It's natural that the Bucks have leaned on Holiday to make up for Middleton's absence. But Holiday has sometimes struggled to balance table-setting and calling his own number. For someone who's firmly a top-30ish player, the variance in decision-making has been wild to see, particularly late in games.

With Middleton taking on some of the creation burden, Holiday can act more as an additive than a necessity — a balance that should make things flow a lot smoother offensively.