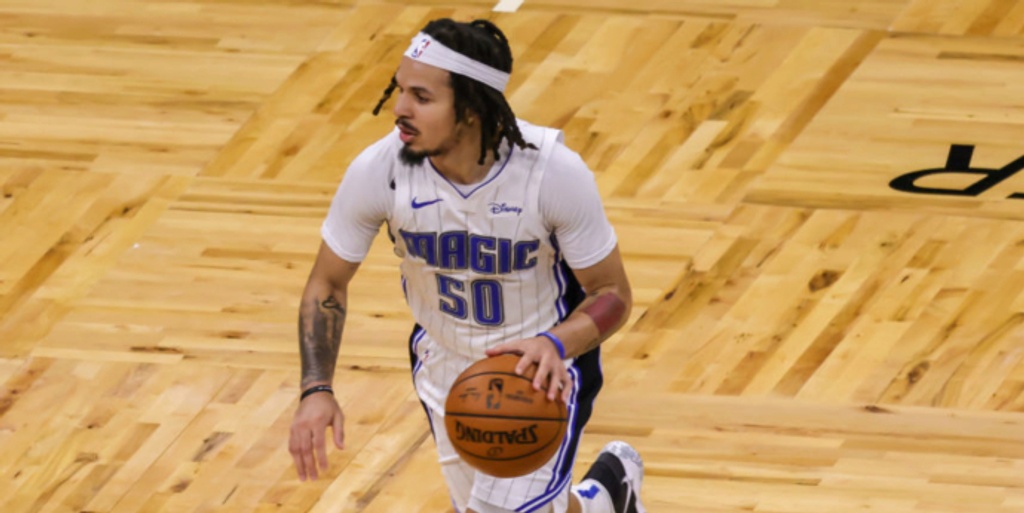 Cole Anthony has another must-see interview after game-winner: 'I was bred for this'

Following the Orlando Magic's second win in three games and a buzzer-beating three to send the team to victory over the Memphis Grizzlies, rookie Cole Anthony delivered his second must-see interview of the season.

"I do this, man. I do this. I was bred for this," Anthony told Bally Sports Florida before Markelle Fultz doused him with a bottle of water.

Down by two with seven seconds left in the game, Anthony inbounded the ball to Dwayne Bacon, who handed it back to the fearless rook to take matters into his own hands. Anthony dribbled to the right side of the floor, danced at the elbow, crossed over one time to the left and buried a triple over the outstretched arms of Kyle Anderson, leaving just one-tenth of a second on the clock. It was a walk-off and the second game-winner of Anthony's young career.

"We had a few plays [drawn] up and we had a play drawn up before that if the ball had come to us when they was reviewing that joint. I was honestly in my head like, 'I really just want an iso.' Not even gonna lie to you, I wanted an iso," said Anthony, who tallied a career-high 26 points to go along with 8 rebounds, 6 assists and 3 steals. "I just knew if I got someone on an island, it wasn't gonna be safe. That's for real what I knew was happening. But that was the play we drew up, came off that, still had Kyle Anderson on me [and] I was like, 'Yeah, it's game time.'"

"I live for these end-of-the-moments of games. It's crunch time. [Like] what I said two games ago [in Cleveland], that's my time...shout out to everybody on the Magic, we fought today. We [were] down 15 coming into halftime and dudes did not give up. I love this team, love this city. Let's go!"

Scattered throughout the nearly three minute interview were moments of hilarity, from Anthony joking about not knowing who Mo Wagner was when he first got to Orlando, to publicly thanking the Denver Nuggets for trading R.J. Hampton to the Magic.

Perhaps the funniest snippet of the interview was Anthony staring directly into the camera, saying, "Yeah, yeah, yeah," when asked of his give-the-ball-to-me comments after his first career game-winner against the Minnesota Timberwolves back on Jan. 20 -- also the first incredible NBA postgame interview Anthony was a part of.

Bally Sports Florida broadcaster Dante Marchitelli couldn't have said it better when the rookie signed off and headed into the locker room.

"Cole Anthony after a game-winner is must-watch TV."