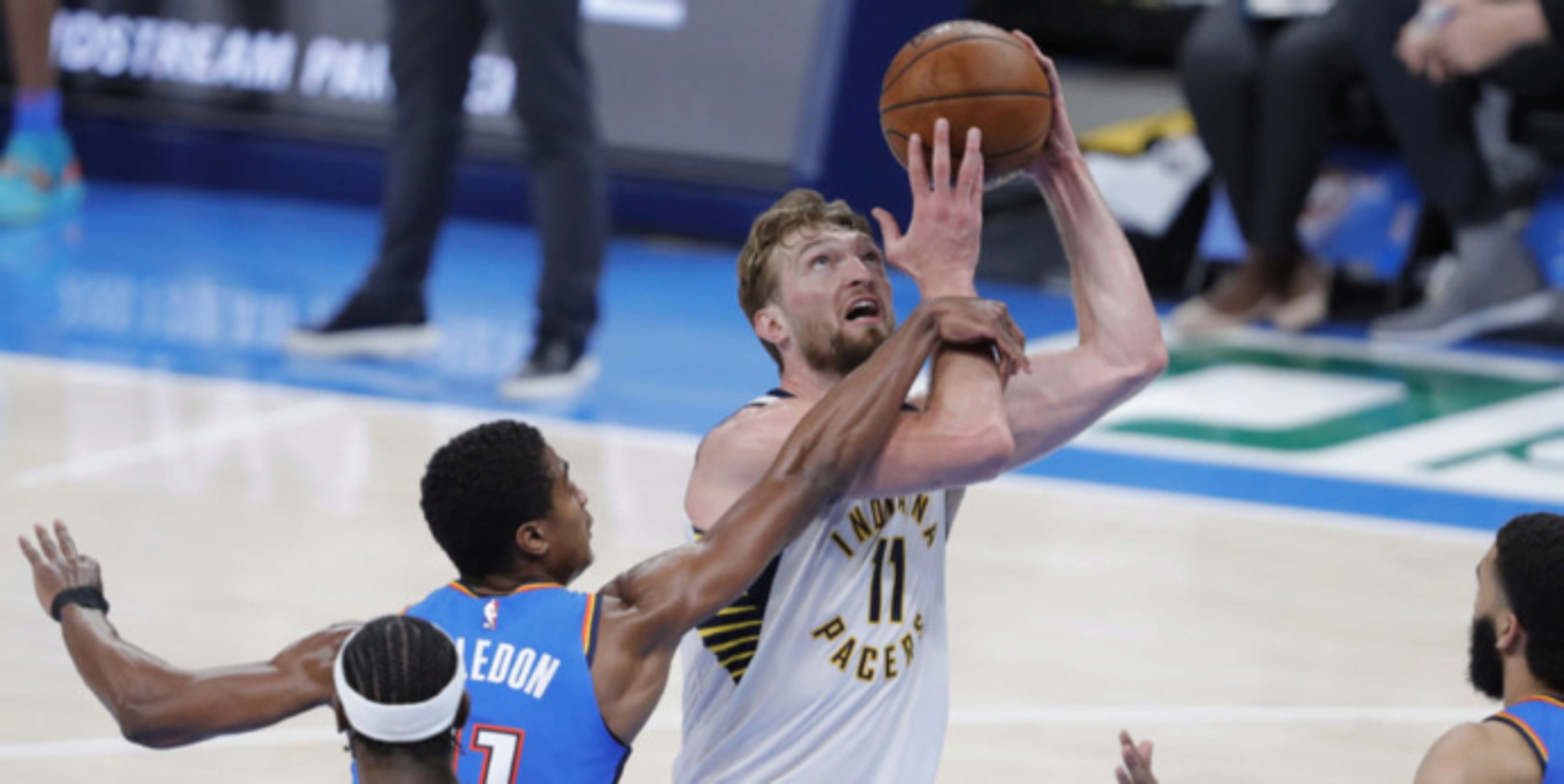 Sabonis has triple-double by half; Pacers score most points in 35 years, top Thunder 152-95

Domantas Sabonis had a triple-double in the first half and the Indiana Pacers flirted with the most lopsided victory in NBA history before beating the Oklahoma City Thunder 152-95 on Saturday night.

Sabonis finished with 26 points, 19 rebounds and 14 assists, and the Pacers scored their most points in a game since joining the NBA in 1976.

They led by 67 points with 4:12 remaining before the Thunder scored the game’s next 10 points. The NBA's largest victory margin remains 68, set by Cleveland against Miami in 1991.

It only took Domantas Sabonis 30 minutes to drop a 26-19-14 triple-double (67.8 FPTS) in his first game back from injury. pic.twitter.com/IouWAboWQF

“No, especially on the professional level," he said. “But we were just out there having fun. We didn’t even realize the score most of the time. We were just running our plays, trying to be aggressive and good things were happening.”

The Pacers' previous record was 150 points against Denver in 1982. Indiana shot 65.5% from the field — the highest percentage for an opponent in Thunder history.

Sabonis returned after missing six straight games with a sore lower back. He made 10 of 13 shots and had a career-high assist total.

“I surprised myself in the first quarter when I was not that tired," he said. “I thought I was going to get winded more, but the coaching staff and medical staff did a great job of trying to keep my conditioning up.”

He clinched the triple-double on an assist to Doug McDermott two minutes before halftime. He finished the first half with 22 points, 11 rebounds and 11 assists for his seventh triple-double of the season the 11th of his career.

He joined Nikola Jokic and Russell Westbrook (twice) as the only players with triple-doubles before halftime since the play-by-play era began in 1997-98, according to Elias. He learned he was closing in on the triple-double during a timeout late in the second quarter.

“We just kept playing,” he said. “Guys were getting open, I was trying to find them and the rest -- they made the shots.”

The Thunder got Sabonis on draft night in 2016, then sent him to the Pacers the next year in the deal that brought Paul George to Oklahoma City. Sabonis showed why Thunder general manager Sam Presti is considered one of the best talent evaluators in the business.

McDermott scored a career-high 31 points and Caris LeVert added 25 for the Pacers, who entered Saturday’s game in ninth place in the Eastern Conference after losing two straight.

Moses Brown scored 16 points for the Thunder, who have lost 19 of their past 21 games.

Indiana led 82-46 at halftime, the most points Oklahoma City has ever allowed in a half. Indiana shot 70% before the break, including 61% from 3-point range.

“You kind of need some stops, or you need them to cool off a little bit, or you need some more offense," Daigneault said. “We needed a combination of things.”

The Pacers poured it on in the third quarter, scoring 44 more points to take a 126-70 lead. They surpassed their previous season scoring high of 141 points on a dunk by Amida Brimah with 5:30 remaining and set their NBA scoring record on a 3-pointer by Cassius Stanley in the final minute.

Thunder: Guard Charlie Brown Jr. got the start and scored eight points. He's on a 10-day contract. ... Made just 8 of 38 3-pointers and 11 of 23 free throws. ... Recent acquisition Gabriel Deck had eight points and 10 rebounds in 24 minutes.

Sabonis on returning to action: “It was fun. It was so much fun to finally be out there with my teammates. Watching on the sidelines for an athlete is never fun, and to be out there again and play the game was awesome.”

The Pacers had 41 assists — four short of their team NBA record.

“Everybody was moving and cutting, and when we share the ball, everybody’s getting open shots,” Sabonis said.

The Thunder nearly set a record for points allowed in a game, but the Pacers fell just short of the 154 points San Antonio scored against Oklahoma City in 2019.

MORE:
NBA News
Thunder
Pacers

Orlando Magic sign Ignas Brazdeikis to 10-day contract
Cole Anthony has another must-see interview after game-winner: 'I was bred for this'

Featured News

Revisiting the star-studded 1996 NBA Draft: 'We were all on a mission'
May 4 2021
Isaiah Livers is ready to rise up in second season with Pistons
13h
Best bets for 2022-23 NBA Most Valuable Player award
yesterday
Best bets for 2022-23 NBA Defensive Player of the Year
2 days
Evaluating how 10 NBA superstars have changed as creators over time
2 days
Blazing the Trail: Shane Battier, the data-ball defender
3 days
Wanting to be valued, Derrick Walton Jr. makes no-brainer move to NBL
1 week
Subscribe to our newsletter
SUBSCRIBE
Follow Us



Basketball News
Home
Podcasts
Scores
Draft
Stats
News
Charts
Contact
Contact Us
Advertise With Us
Terms Of Use
Privacy Policy
Do Not Sell My Personal Information
Cookie Policy
Download Our App!
Stay up-to-date on all things NBA
Copyright © BasketballNews.com 2020. All Rights Reserved.
