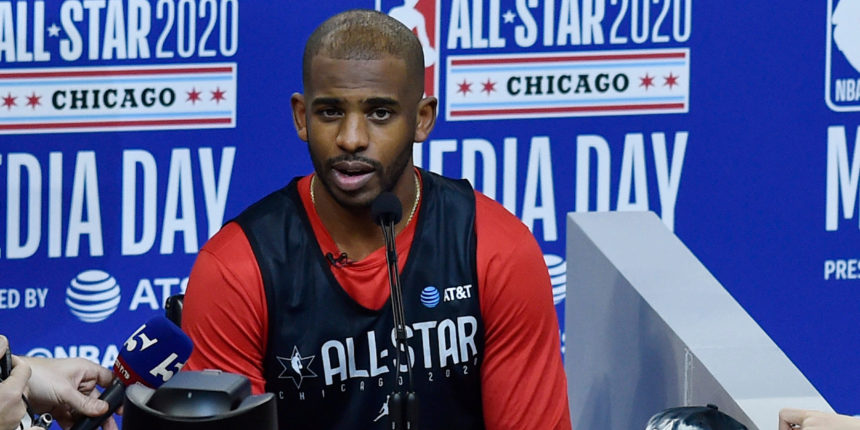 Are Chris Paul, LeBron James and other players on same page about 2021 NBA All-Star Game?

Many people are talking about money when it comes to the near-finalization of the 2021 NBA All-Star Game, which is set to come to Atlanta on March 7. Once (if) the deal is fully agreed upon by both the league and the National Basketball Players' Association, there will be an uproar of numerous detractors regarding the "unnecessary cash grab." Currently, the All-Star break is scheduled for March 5-10, with the game and extracurricular festivities (dunk contest, three-point shootout) occuring over All-Star Weekend.

According to ESPN's Adrian Wojnarowski, the negotiations have been spearheaded by NBA commissioner Adam Silver and NBPA president Chris Paul. The details being discussed include specific health-and-safety protocols, as well as scaling down player travel windows to get in and out of the city. Currently, it's an arrive-Saturday-and-leave-Sunday-night scenario, with strict quarantine rules.

Paul is reportedly "an advocate" for ensuring that this year's All-Star Game takes place in Atlanta, per Wojnarowski, citing a plan to use the platform to benefit HBCUs and COVID-19 relief. That's a big endorsement from a top player representative, and the union (along with the NBA) feels that enough of the stars in the league will be willing to participate in the festivities.

However, as specified in the report, a number of players and team executives view this gathering as an unnecessary risk, even with the guidelines put in place. It is clear that not everybody is on the same page within the NBPA.

All you have to do is listen to LeBron James' tangent about how the NBA told its players that there wouldn't be an All-Star Game in 2020-21 due to the shortened time off from last season and the pandemic.

"Coming into this season, we were told that we were not having an All-Star Game, so we'd have a nice little break," LeBron said on Thursday night. "Five days from the 5th through the 10th, an opportunity for me to kind of recalibrate for the second half of the season. My teammates as well. Some of the guys in the league. And then they throw an All-Star Game on us like this and just breaks that all the way up. So, um, pretty much kind of a slap in the face. ... I have zero energy and zero excitement about an All-Star Game this year. I don't even understand why we're having an All-Star Game."

“Zero energy and zero interest”@KingJames on playing in the All-Star Game. pic.twitter.com/yrVi6oedkF

Who can blame him? Just as a thought, that disappointment might be less about the viral risk and more about the time he could be spending with his family, especially considering the sacrifices LeBron and the players had to make in the Orlando bubble.

Sacramento Kings guard De'Aaron Fox didn't mince his words either, although if selected to play in the game, he acknowledged that he would suit up in order to avoid a hefty fine from the league.

"I’m going to be brutally honest -- I think it’s stupid," Fox said on Wednesday night. "If we have to wear masks and do all this for a regular game, what’s the point of bringing the All-Star Game back?"

But while there are likely more players against the idea than for it, Cleveland Cavaliers up-and-comer and Georgia native Collin Sexton is hopeful to be able to participate if he's chosen.

"The All-Star Game is a game that everyone wants to be able to play in and everyone wants to be a part of," Sexton said on Friday morning. "I understand where guys are coming from, but it's the one time [of year]. The weekend, it's fun, just seeing the dunks, three-point [contest], skills [contest]. It's enjoyable no matter what.

"Everybody's gonna voice their opinion, but for me, I feel excited and I'd feel proud to represent my team, represent the organization, just to go out there and be a part of All-Star Weekend. They feel a different way, and they have a reason to feel that way. But it just being in Atlanta and being a part of it, that would be a blessing for sure."

Players who aren't voted in to the game or participating in the contests are allowed to vacation over the break within the United States (Hawaii, Puerto Rico, U.S. Virgin Islands), but are restricted from international travel. The NBA's memo indicates that they will implement daily testing over this time period and the player is required to return back to his home market two days before his team's next game.

A push for an All-Star Game is due to financial reasons and how engaged the fans are with the event. As mentioned earlier, we can't act like it's not a revenue-based heat check in a season that's barely begun to stabilize, either.

As we can plainly see, not everybody (players and league executives) view this situation the same way, which begs the question: Can they come to a compromise? Because nothing's official until the dotted line is signed.